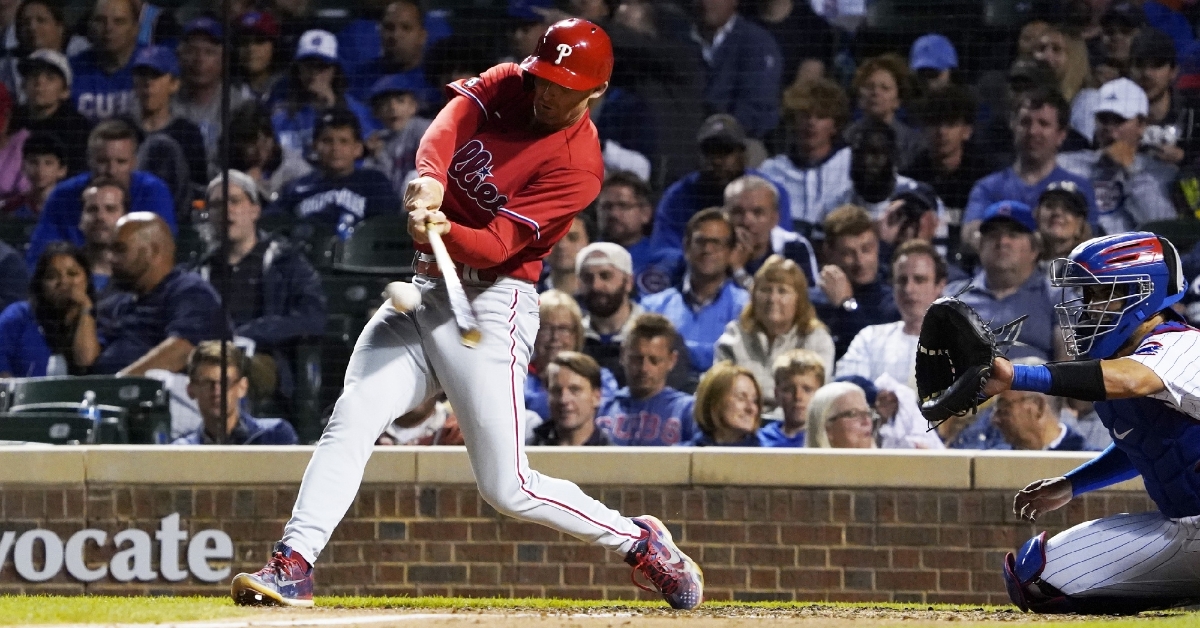 CHICAGO — The euphoria the Chicago Cubs (43-45) likely experienced after ending an 11-game losing streak on Wednesday proved to be short-lived, as the Philadelphia Phillies (42-43) blanked the Cubs on Thursday. Closing out the four-game set with an 8-0 shutout win at Wrigley Field, the Phillies took 3-of-4 from the Cubs in the series. The Cubs, who played without the banged-up Javy Baez and Kris Bryant, were outhit 11-5 on the night, and three of the Phillies' hits were home runs slugged by Brad Miller, whose parents were in attendance.

Adbert Alzolay started on the bump for Chicago and received no run support. He faced off against Zach Eflin, who pitched six scoreless innings for Philadelphia. The 1-2-3 top of the first ended with Anthony Rizzo making an impressive play by gloving a hard-hit grounder off the bat of Bryce Harper, leading to a putout at first. Patrick Wisdom and Jason Heyward singled off Eflin in the bottom of the first. With two outs and Wisdom at third, Heyward stole second, but Robinson Chirinos, who was making his first start for the Cubs, then struck out.

A walk of J.T. Realmuto and a single by Didi Gregorius began the second frame. The Phillies got on the scoreboard by executing a double steal, as Gregorius stole second and Realmuto stole home on an Alec Bohm strikeout. Realmuto headed home when Chirinos threw to second, and the throw to the plate was cut off by Alzolay, with Chirinos and Realmuto colliding at the dish. Chirinos was shaken up by the collision but able to remain in the game. Travis Jankowski then grounded out, leaving Gregorius stranded in scoring position.

a double steal gives the Phillies a 1-0 lead ?? pic.twitter.com/rkjuuYQ1F2

Nico Hoerner singled with one out in the second, and Alzolay worked a four-pitch walk with two away. Joc Pederson concluded the inning by grounding out. Miller belted his first dinger of the contest with two outs in the third. The 401-foot solo shot carried out to left-center. Gregorius doubled with one out in the fourth but did not score. Following a fourth-inning base hit by Rafael Ortega, Hoerner grounded into an inning-ending 4-6-3 double play.

Brad gets the start and makes the most of it.#RingTheBell pic.twitter.com/n6cTSmnlmU

Jankowski led off the fifth with a bunt single, barely beating Alzolay in a footrace to first versus. Alzolay tripped and fell after stepping on the bag but was not injured. Eflin advanced Jankowski to second with an ensuing sacrifice bunt, and Miller plated Jankowski with another two-out blast. The 400-foot shot to right put the Phillies up 4-0. Sergio Alcantara hit a leadoff single in the fifth, which proved to be the Cubs' final hit of the evening, and Ian Happ proceeded to ground into a 3-6-3 double play.

Cory Abbott took the mound to begin the sixth inning and issued a leadoff walk to Realmuto. Jason Heyward then gloved a line drive hit to right by Gregorius. The Phillies eventually loaded the bases with two outs, but Abbott escaped the jam by forcing Eflin to ground out. Abbott was not as fortunate his next time out, however. Following a leadoff single by Jean Segura in the seventh, Miller clobbered a 418-foot two-run bomb to right. Miller had a habit of making life difficult on Cubs pitchers as a member of the St. Louis Cardinals (43-45) last season, and he carried that trend into his Phillies tenure by becoming the club's first player to homer three times in the same game since Jayson Werth did so in 2008.

Big-time Brad hits his THIRD homer of the night.??????#RingTheBell pic.twitter.com/GcIuD5d1yf

Bryce Harper smacked a double off Abbott after Miller's third round-tripper, and Gregorius went on to hit a two-out jack just over the wall in right. Archie Bradley walked Chirinos to begin the home half of the seventh, but the Cubs remained scoreless. Abbott and Hector Neris both went three up, three down on the hill in the eighth. The Phillies put two runners in scoring position in the ninth, with Adam Morgan leaving them stranded by striking out Odubel Herrera. Chirinos drew another base on balls in the ninth, but Ranger Suarez tossed a scoreless frame and wrapped up the 8-0 shutout.