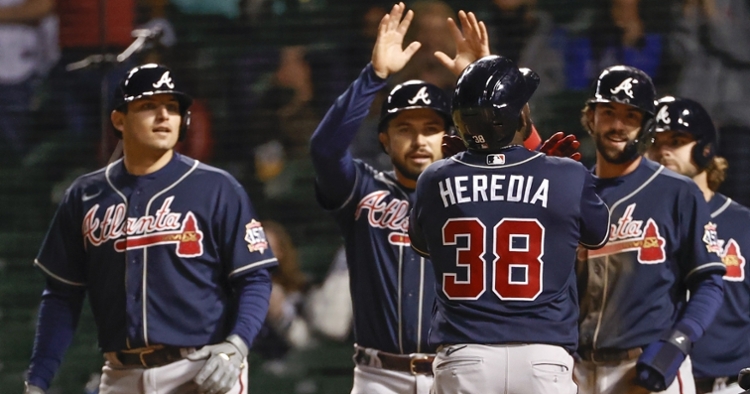 CHICAGO — After going yard six times in a 13-4 beatdown of the Atlanta Braves (7-9) on Saturday, the Chicago Cubs (6-9) were on the opposite end of a 13-4 rout on Sunday. The Braves (7-9) enacted revenge at Wrigley Field by smacking five home runs and racking up 14 total hits. Kyle Hendricks started on the mound for the Cubs and struggled out of the gate, becoming the first-ever Cubs pitcher to give up four home runs in the first inning. Anthony Rizzo swatted two dingers for the Cubs, but the Braves never trailed and won the rubber match of the three-game series.

Freddie Freeman opened the scoring with a 421-foot solo shot to right in the top of the first. Soon afterward, Travis d'Arnaud drove a two-run blast to left. Ehire Adrianza hit a solo jack to make the score 4-0, and Guillermo Heredia smacked his first of two long balls on the night with a 415-foot moonshot to center. Bryse Wilson got taken deep on a two-out solo homer by Anthony Rizzo in the bottom of the first. Later in the inning, third baseman Austin Riley committed a throwing error to first after that enabled Kris Bryant to score. Javy Baez was credited with an infield single on the play. Baez proceeded to steal second, but Jason Heyward grounded out, leaving two men stranded.

ok guys they're hitting home runs so fast that we can't keep up, here's this one and then we'll follow up with the next one in a minute, thanks#ForTheA pic.twitter.com/eVIOSs44N3

Source: The top of the 1st inning was fun.

Hendricks settled down and pitched a scoreless second. David Bote led off the bottom half of the inning with a double to right-center but was tagged out while attempting to reach third on an ensuing bunt. Kyle Hendricks' bunt was quickly fielded by Freeman, who then fired to third base in order to gun down Bote. On the very first pitch of the bottom of the third, Rizzo lifted a solo bomb over the center field wall, homering off a Wilson curveball for the second time.

The Braves went up 7-3 in the fourth but lost the services of young superstar Ronald Acuna Jr. for the rest of the contest. Acuna drew a leadoff walk but was injured while sliding back to first on a pickoff attempt. He remained in the game for the time being and eventually tagged up and scored from third on a sacrifice fly hit by Travis d'Arnaud. However, Acuna seemed to aggravate his injury when he slid across the plate. Rizzo cut off the throw from the outfield and caught Freeman in a rundown between second and third. Freeman was tagged out to end the half-inning.

Alec Mills toed the rubber in the top of the fifth and prevented the Braves from adding to their load after they loaded the bases with one out. Mills came unglued his next time out, though, giving up three straight hits to begin the inning and then getting pulled. A base knock by Marcell Ozuna scored Freeman, who led off the sixth with a double. A ground rule double by d'Arnaud, which featured fan interference, followed, and Ryan Tepera relieved Mills at that point. After Tepera hit the first batter he faced, Adrianza brought Ozuna home with a sacrifice fly. Tepera proceeded to bean another batter, and his outing became even more woeful when Heredia powered out his first career grand slam.

In the wake of giving up a grand slam, Tepera remained on the bump and finished off the sixth frame. The Cubs were unable to threaten the Braves the rest of the way. Chicago boasted runners on the corners with no outs in the sixth but did not score. A few at-bats after Riley made an impressive catch of a Rizzo popup while falling down, a two-out triple by Joc Pederson in the bottom of the eighth gave way to an RBI double off the bat of Baez. The run scored by Pederson in the penultimate inning set up the eventual final score of 13-4. Atlanta took 2-of-3 in the series, and the North Siders are now 3-8 since beginning the season with a record of 3-1.