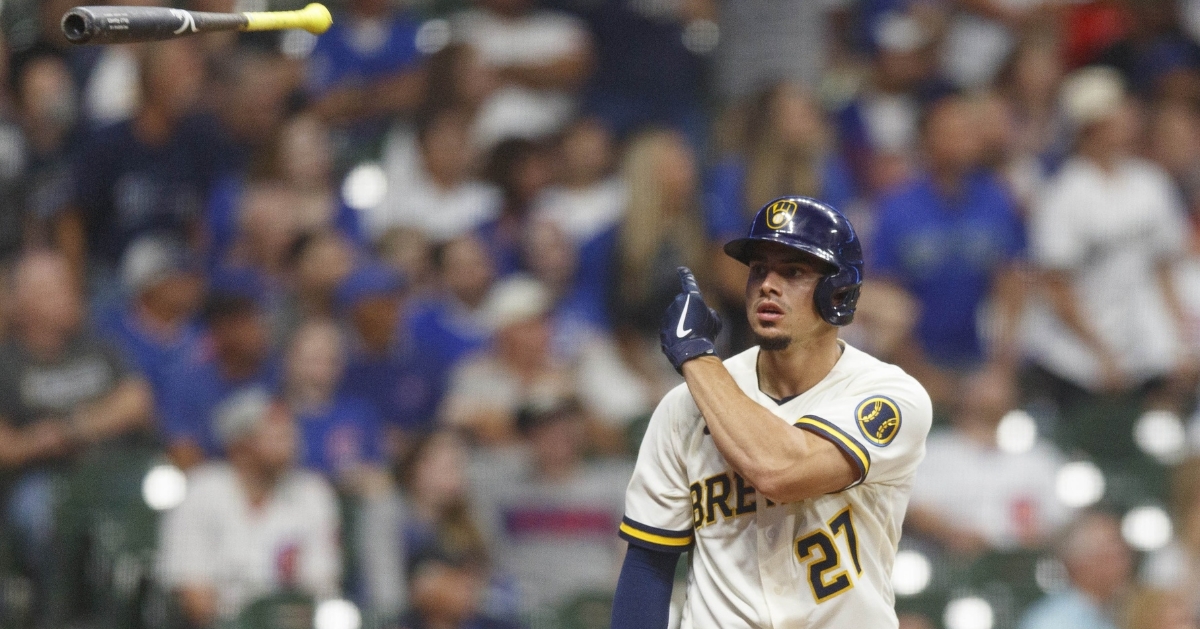 MILWAUKEE — A rare bullpen implosion suffered by the Chicago Cubs (42-37) contributed to a deceptive final score in Monday's matchup between the North Siders and their rivals from the north, the Milwaukee Brewers (46-33). In the opener of a three-game series at American Family Field, the Brewers racked up 10 runs in the bottom of the eighth and won 14-4. The Cubs' four runs were scored via a pair of two-run homers, and the Brewers ultimately outhit the Cubs 15-5.

Joc Pederson drew a leadoff walk off Freddy Peralta to begin the game, and Ian Happ then swatted a two-run dinger just over the wall in right, marking his first opening-inning long ball of the season. Jason Heyward reached with two outs because of a Luis Urias throwing error but did not score. Urias made up for the error by leading off the bottom of the first with a base knock. Christian Yelich then poked a bloop double through the infield, moving Urias to third. Following an Omar Narvaez walk, Avisail Garcia plated Urias and Yelich via a single.

Garcia's two-run base hit gave way to a single by Jace Peterson, which reloaded the bases. Hendricks remained composed and tallied two straight outs to keep the game tied. "The Professor" singled into the right field corner with two outs in the second. Peralta then walked the next two batters before Baez struck out, leaving the bases loaded. With two outs in the third, Garcia hit a go-ahead solo shot to left. In the fifth, Baez drew a two-out walk on a borderline full-count pitch. However, he was then thrown out by Narvaez while trying to steal second, and the Cubs unsuccessfully challenged the call.

Following a base on balls drawn by Yelich in the fifth, Bryant, who started in place of the injured Anthony Rizzo at first, caught a popup in foul ground, and his momentum carried him down the steps and into the Brewers' dugout. As a result, Bryant was considered out of play, and Yelich was sent to second. Hendricks prevented the Brewers from adding to their lead in the fifth, though. The sixth was a different story, as Peterson singled and stole second prior to Keston Hiura bringing him home via a single.

Jose Lobaton was walked by Brad Boxberger in the seventh, and Patrick Wisdom proceeded to collect the first pinch-hit home run for the Cubs on the year. Pinch hitting for Hendricks, Wisdom skied a 435-foot no-doubter out to left. Pederson, who entered the tilt having not been walked since June 2, tabbed his second walk of the night. After that, Pederson was tagged out at third when Happ slapped a chopper to shallow left. Yelich gunned Pederson down, and Happ reached second on the throw, with Baez then striking out to end the half-inning.

Bryant pulled off a couple of great defensive plays in the seventh, starting with him digging a bounced throw out of the dirt. Andrew Chafin made a low throw to first, and Bryant's pick outed Urias. Bryant ended the frame by laying out and making a diving stop of a grounder hit by Narvaez. He then stepped on first for an unassisted putout. The Cubs manufactured a two-out rally off Devin Williams in the eighth, with an Eric Sogard double and two walks loading the bases. On a full count, Rafael Ortega grounded out to first, stranding all three baserunners.

Ryan Tepera walked back-to-back batters with one out in the eighth and next gave up an RBI double, which plated Peterson, to Jackie Bradley Jr. Hiura tagged up and scored from third on a sacrifice fly by Tyrone Taylor, and Urias chased Tepera from the game with a double that pushed Bradley across. Trevor Megill, who was called up earlier in the day, entered with the Cubs trailing 7-4. Yelich was intentionally walked, and Adames then walloped a 411-foot jack to left. The three-run shot provided the Brewers with plenty of breathing room.

From there, Megill walked Narvaez and got taken for a single by Garcia. Narvaez scored on a Peterson double, and Hiura increased the Brew Crew's lead to 10 with a three-run round-tripper to right. Sogard finished the inning off on the mound, forcing Taylor to fly out after giving up a single to Bradley. The ninth inning featured Miguel Sanchez retiring the Cubs in order, thereby locking up the Brewers' 14-4 victory and handing the Cubs their fourth loss in a row.