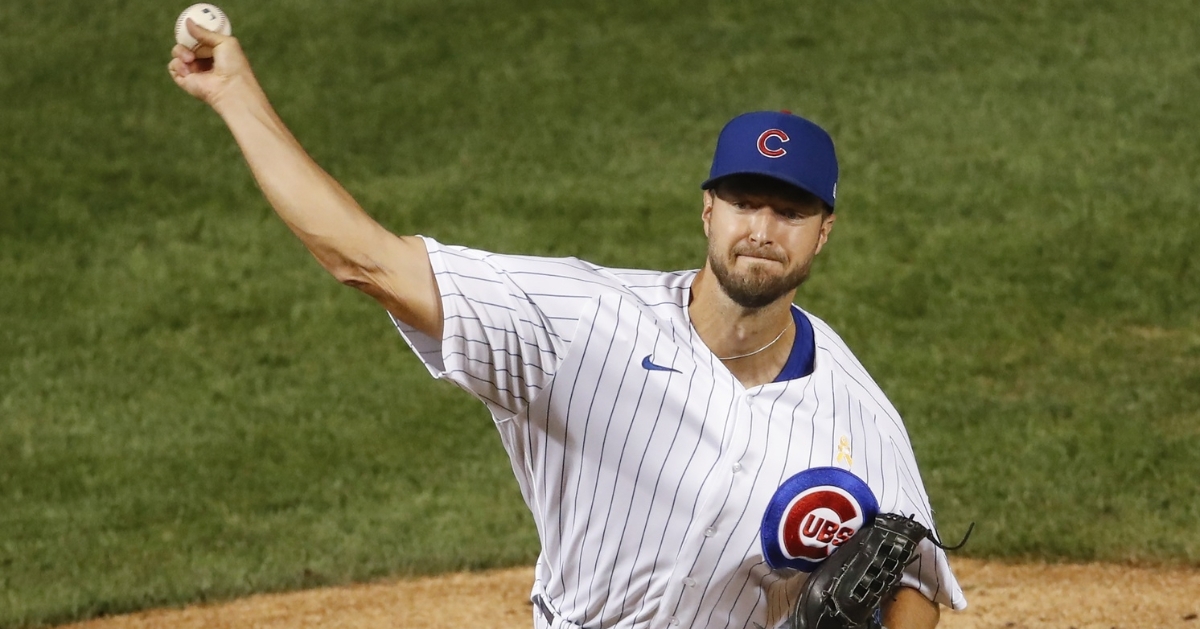 Making his second start of the season, Colin Rea lasted only two innings on the mound for the Cubs. (Credit: Kamil Krzaczynski-USA TODAY Sports)

CHICAGO — Suffering their first home doubleheader sweep at the hands of the St. Louis Cardinals (16-15) since 2002, the Chicago Cubs (23-17) dropped the nightcap of a doubleheader at Wrigley Field. The Redbirds won the early game 4-2 and notched a commanding 5-1 victory in game two.

The Cardinals served as the de facto home team in the 5-1 matchup, which was technically a makeup game from a postponed series that was supposed to be held in St. Louis. The starting pitchers were announced in between games on Saturday, and Colin Rea, who started on the bump for the Cubs, struggled in his two innings of work, giving up four runs on five hits and two walks.

T1: Cardinals hurler Austin Gomber started in place of Dakota Hudson, whose start was moved to Sunday because of a medical issue suffered by projected Sunday starter Kwang-Hyun Kim. Gomber walked leadoff man Ian Happ, who hit a pair of solo home runs in the opener of the doubleheader, to kick things off. The Cubs went down in order after that, though. Happ failed to record an extra-base hit on the evening, snapping his streak of consecutive appearances with an extra-base hit at six games.

B1: Making his second start of the year, Rea worked a scoreless first frame.

B2: Paul DeJong led off the bottom of the second with a solo dinger hit out to left. Following a walk of Lane Thomas, Rea gave up a two-run blast to Tyler O'Neill that carried out to right.

T3: Jason Kipnis smacked a leadoff double to the wall in left-center, but the Cubs were unable to bring him home.

B3: The Redbirds hit three consecutive singles off Rea, including an RBI base knock by Brad Miller that plated Tommy Edman. Duane Underwood Jr. relieved Rea and limited St. Louis to one run in the inning.

T4: Chicago remained scoreless in the fourth. Following a walk of Jason Heyward, Caratini grounded into an inning-ending double play.

Kolten Wong is coming for that 2020 Gold Glove pic.twitter.com/il90YNdQdf

B4: Between matchups on Saturday, Tyson Miller was added to the Cubs' roster, replacing Steven Souza Jr., who was designated for assignment. Miller pitched three innings of one-run ball. O'Neill doubled off Miller to begin the bottom of the fourth and went on to score via a Harrison Bader sacrifice fly.

T5: Nico Hoerner batted a leadoff single and reached third base because of two wild pitches. A few plate appearances after Kipnis walked, David Bote pushed Hoerner across with an RBI groundout. Kyle Schwarber then drew a base on balls, but Javier Baez struck out to leave the two baserunners stranded.

T6: Heyward swatted a one-out single but never made it beyond first base.

B6: Miller finished off his decent relief appearance by sitting the Cards down in order.

T7: Andrew Miller, who is not related to the aforementioned Miller, pitched the seventh for the Cardinals, and the Cubs went three up, three down. Rea was handed the loss to become 1-1, and St. Louis reliever Ryan Helsley, who was charged with the Cubs' lone run, moved to 1-0 with the win. Also, Cardinals reliever John Gant picked up his fourth hold. The Cubs are not scheduled to partake in any more doubleheaders this season.

The Cubs lose the back half of the doubleheader vs. St. Louis.