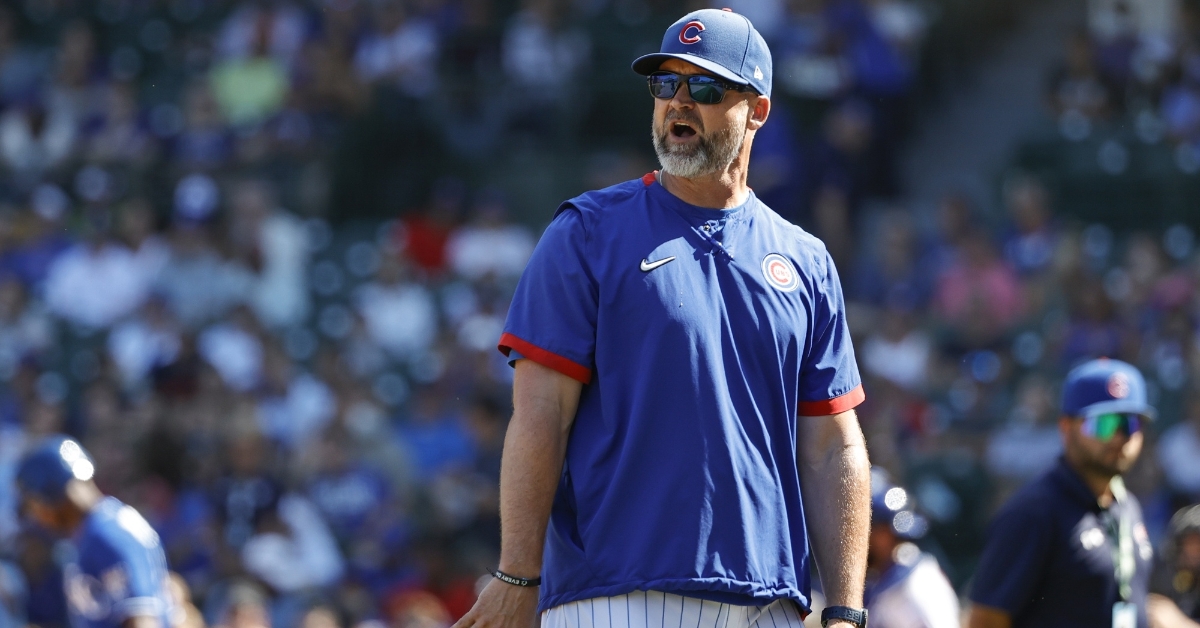 Ross and Co. have had a rough season (Kamil Krzaczynski - USA Today Sports)

Going into the 2020 short pandemic baseball season, many fans were expecting it to be the Cubs' last ride together for the team that won the 2016 World Series. Kris Byrant, Anthony Rizzo, and Javier Baez were nearing free agency. Ben Zobrist had pretty much retired after the 2019 season due to family issues, and ace Jon Lester would probably become a free agent after the season. One thing that did change, and was a major move was replacing popular manager Joe Maddon, with former player and teammate to many of the core players in David Ross.

Ross led the Cubs to the National League Central division title before a quick two-game exit versus the Miami Marlins in the first round of the playoffs. In 2021 the team started slow but gained momentum in May, but after no-hitting the defending World Series Champion Los Angeles Dodgers and being in first place at the end of June, the team hit a spiral they didn't recover from, and management pretty much gutted the team at the trade deadline.

Now, with the Cubs 16 games under .500 and in second to last place in the National League's Central Division, I'm asking for Cubs management to keep David Ross until he has a team that can compete. Yes, Ross did sign a contract extension before the season, so he probably won't be fired, but there are grumblings amongst Cub fans that he should be fired.

The starting pitching this year for the Cubs has been atrocious. Kyle Hendricks, the ace of staff has been up and down, and mostly down this year. Marcus Stroman, the big free agent off-season signing has been more injured than not, and when has pitched except for a few starts, it hasn't been pretty.

Wade Miley, Drew Smyly, and Alec Mills also have not been healthy very much this season, and don't forget Adbert Alzolay who was arguably the Cubs' most talented pitcher hasn't thrown a pitch this year due to injury. Therefore, Ross has had to mix and match not only the starting pitching but the bullpen also.

Justin Steele and Keegan Thompson have been nice swing men, with Steele starting more than not, and David Robertson has been nice closing out games, but Ross has had to manage the best he could with very few other major league-tested arms to work with. Don't forget how great Ross looked last year when he had the excellent back end of the bullpen in Craig Kimbrell, Ryan Tepera, and Andrew Chafin.

If you look back at the first rebuild under the Theo Epstein/Jed Hoyer/Jason McLeod regime, and the first manager they had in Dale Sveum they said that record wouldn't be the reason Sveum is kept or not, player development would be. Management thought Anthony Rizzo, Starlin Castro, and others took a step back under Sveum, and he was let go, and replaced by Rick Renteria and eventually Joe Maddon.

Ross has had players develop, Christian Morel looks better every day, Nico Hoerner when healthy looks like a major league shortstop, and as I said before Keegan Thompson is an arm to build around.

So let's give Ross a chance and let's get Seiya Suzuki, David Bote, Adbert Alzolay, and others back healthy.

Let's have the Ricketts family spend some money on the Cubs instead of the other areas around Wrigley Field or trying to buy a European Soccer team. Then we can see if David Ross is worth keeping or not.