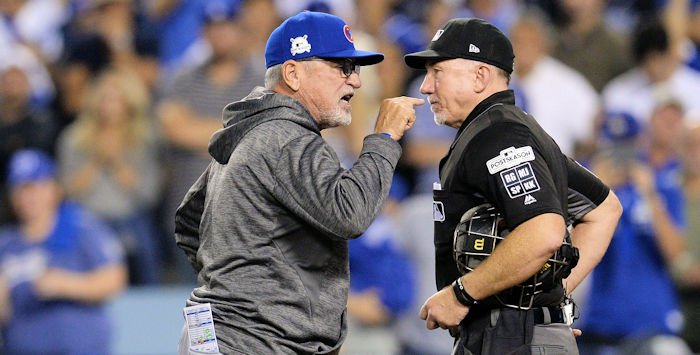 Cubs manager Joe Maddon was not pleased with the outcome of the play at the plate in the bottom of the seventh. (Credit: Gary Vasquez - USA Today Sports)

LOS ANGELES – Everything that could possibly go wrong for the Chicago Cubs in the bottom of the seventh of their opening game versus the Los Angeles Dodgers in the NLCS seemed to come fruition. From bullpen issues plaguing the North Siders yet again to manager Joe Maddon getting ejected on a very controversial call, the Cubs essentially lost the ballgame in the two-run frame. Wasting an early 2-0 lead and a quality performance against Dodgers southpaw Clayton Kershaw, the Cubs melted down late to lose 5-2 and fall into an early 0-1 hole in the series.

The Cubs struggled to manufacture runs early, leaving multiple runners stranded in scoring position. All in all, Kershaw held his own until Chicago outfielder Albert Almora, Jr., got under a Kershaw breaking ball on a 412-foot two-run home run in the top of the fourth, making up for a costly double play a few innings prior. Marking the first postseason homer of the second-year player's career, Almora's bomb scored Cubs catcher Willson Contreras, who singled to center to begin the inning.

Almora ??! Cubs take a 2-0 lead over the Dodgers in the 4th. #MLBonTBS pic.twitter.com/TNF3hhuVMu

Kershaw lasted just one more inning after that, with Dodgers manager Dave Roberts opting to pull his ace after 87 pitches. He had extra incentive to do so after L.A. knotted the game up at two with a two-run fifth inning, making the services of Kershaw much less needed. After throwing four marvelous innings, Cubs starting pitcher Jose Quintana, who was coming off of a subpar bullpen appearance in Thursday's NLDS win for Chicago, finally came undone in the fifth.

Quintana walked two consecutive batters with one out and next gave up an RBI double to Dodgers right fielder Yasiel Puig that scored second baseman Logan Forsythe. Karma certainly did not play a factor in Puig's solid 2-3, two-RBI performance on the night, as his frequent showboating did not prevent him from serving as the player of the game for Los Angeles.

Puig called his shot? I love this dude. pic.twitter.com/j7NJSy47eh

Following Puig's double, Dodgers shortstop Charlie Culberson came through with an RBI sacrifice fly to left that brought catcher Austin Barnes in to score, making the game a 2-2 tie. At the conclusion of the fifth, Quintana was pulled from the game, setting the stage for bullpen mistakes to doom the Cubs once again this postseason.

First, with new call-up to the postseason roster Hector Rondon on the hill for the Cubs, Dodgers center fielder Chris Taylor went yard on a solo homer over the wall in right field, putting L.A. up 3-2. Then, in the seventh, the Cubs fell into a serious hole, with reliever Mike Montgomery giving up a homer to Puig, the first of Puig's playoff career, and the Dodgers later scoring on a controversial play at home plate.

Thanks to a wily challenge by the Dodgers, Los Angeles went up 5-2 after it was ruled via video review that Contreras blocked home plate on a tag-out of Culberson, who was subsequently ruled safe due to the violation of the "Buster Posey Rule" by Contreras. Although Culberson slid past home plate without touching it and was then tagged out by Contreras, the umpires ruled that Contreras had illegally blocked the plate beforehand. A livid Maddon proceeded to debate the call with the umpires before the skipper was ejected from the game.

Speaking on the controversial call after the game, Maddon told reporters, "He (Willson) did everything right. There is nothing he could do differently. It was a perfect play that we got penalized on."

Wasting a marvelous throw from Cubs left fielder Kyle Schwarber to attempt to out Culberson on a single to left by Dodgers third baseman Justin Turner, the overturn on the challenge provided the Dodgers just enough breathing room to coast to victory over the Cubs for the remainder of the contest. Finishing off the Cubs with a quick save in the top of the ninth, Dodgers closer Kenley Jansen secured the 5-2 Los Angeles win.

Accruing just four hits on the night, Chicago was unable to experience much success against the Dodgers' arms, exacerbating the issues created from another bullpen letdown. Currently sporting a dismal 7.08 ERA this postseason, the Cubs' relief-pitching unit continued to be the primary source of Chicago's issues in Game 1.

Dodgers reliever Kenta Maeda, who, along with John Lackey of the Cubs, was one of two regular starters to come out of the bullpen in Game 1, earned the win for a flawless one-inning outing. Rondon, who gave up what proved to be the winning run on the homer by Taylor, took the loss, while Dodgers closer Kenley Jansen received the save.

Game 2 is set to take place tomorrow at Chavez Ravine, with the first pitch slated for 4:38 PM PST. Veteran lefties Rich Hill of the Dodgers and Jon Lester of the Cubs will do battle on the mound in a pivotal second installment of the 2017 NLCS.