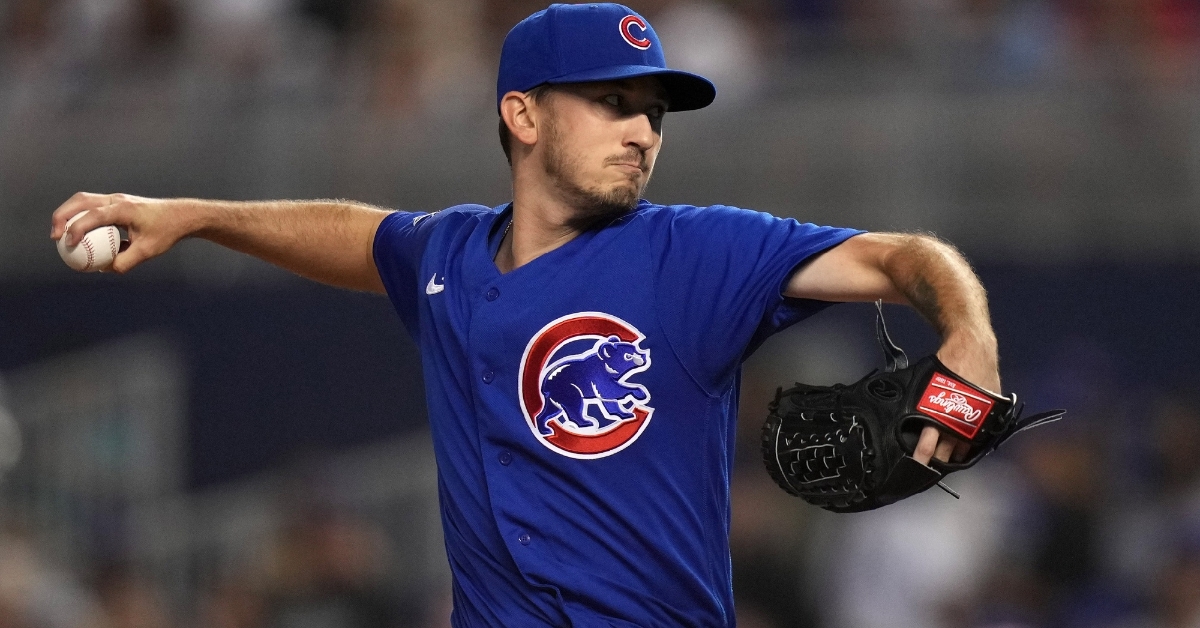 MIAMI — Three costly errors committed by shortstop Sergio Alcantara resulted in the Chicago Cubs (52-67) coughing up not one but two leads in a loss to the Miami Marlins (50-67) on Saturday. Following a two-out throwing error suffered by Alcantara in the sixth, Brian Anderson skied a three-run blast. Frank Schwindel hit a bases-clearing double that put the Cubs up 4-3 in the eighth inning, but the Fish plated two runs in the home half of the inning, which featured two more Alcantara errors, and went on to defeat the North Siders 5-4 at LoanDepot Park. As a result, the Cubs' losing streak now stands at 10 games.

In a pitching battle of Zachs, Zach Davies and Zach Thompson started on the mound. After Thompson pitched a 1-2-3 first, Davies gave up a leadoff double in the first. Miguel Rojas was initially called out at second after Ian Happ threw a dart from left to David Bote at second. However, a successful Marlins challenge resulted in Rojas being called safe at second. Rojas moved to third on a groundout and was forced to stay there when center fielder Rafael Ortega made a great throw to the plate upon catching a line drive. An ensuing groundout ended the inning.

Happ led off the second with a single, but Austin Romine grounded into an inning-ending double play. Ortega led off the fourth with a controversial ground rule double, as he reached third but was sent back to second because the ball became lodged in a gap at the bottom of the outfield wall. David Ross argued the ruling, but Joe West stood by the call. The ruling proved inconsequential, as Ortega moved to third on a groundout and scored on a bloop single hit by Patrick Wisdom, who was subsequently picked off at first by Thompson.

Jesus Aguilar reached to begin the bottom of the fourth because of catcher's interference being called against Romine, which marked one of four Cubs errors on the night. Lewis Brinson grounded into a double play after that and tripped over his bat after slamming it down in frustration. and Davies then snagged a comebacker off the bat of Anderson, resulting in an inning-ending lineout. Davies struck the side out swinging in the fifth, with Bryan De La Cruz hitting a two-out single of little significance.

Alcantara led off the sixth with a base knock and reached second on a sacrifice bunt by Davies prior to tagging up and advancing to third on a flyout by Ortega. Schwindel then sent a drive out to deep center that was caught just in front of the warning track, thus stranding Alcantara, whose error in the bottom of the sixth preceded Anderson's go-ahead jack. Aguilar walked with two outs, and Alcantara then made an errant throw to Bote at second after fielding a ground ball hit by Brinson. With runners on second and third following the error, Anderson took Davies deep with a 403-foot blast to left.

Former Cub Anthony Bass sat the Cubs down in order in the top of the seventh, and Trevor Megill, who was called up prior to the game, worked around a one-out base hit by De La Cruz in the bottom of the seventh. Richard Bleier gave up a leadoff infield single to Romine in the eighth. Johneshwy Fargas then grounded into a fielder's choice, which resulted in Romine being outed at second. Following an Alcantara lineout, Dylan Floro entered the game to pitch to pinch hitter Matt Duffy, who singled. Ortega drew a walk to load the bases, and Schwindel then smacked a three-run double past Anderson at third and down the left field line, clearing the bases and providing the Cubs with a 4-3 advantage. Thereafter, Wisdom struck out to end the half-inning.

A bases-clearing double for the lead from Schwindel! pic.twitter.com/Azg0FqlFQj

Codi Heuer was taken for a leadoff ground rule double by Jazz Chisholm Jr. in the eighth. Aguilar fouled out in the next at-bat, but Alcantara proceeded to err on back-to-back plays. He first mishandled a grounder hit by Brinson. Then, with runners on the corners, Alcantara misplayed an Anderson grounder. The second fielding error was accompanied by Chisholm coming home and evening the score at 4-4. Magneuris Sierra plated Brinson with a go-ahead single after that. Heuer collected two straight outs with runners on second and third, preventing the Marlins from adding to their lead, but Anthony Bender retired the side in order in the ninth and finished off the Marlins' 5-4 victory.