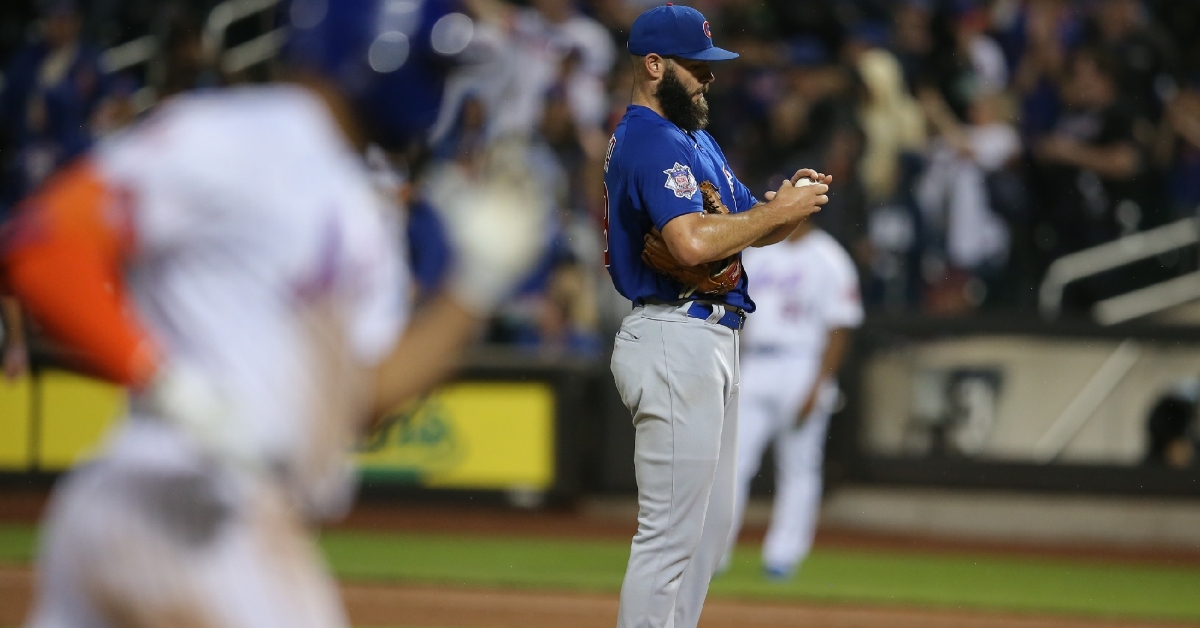 NEW YORK — Snapping their five-game winning streak, the Chicago Cubs (38-28) faltered at the plate in the opener of a four-game series at Citi Field. The North Siders mustered just three hits, two of which were back-to-back solo home runs, and lost 5-2 at the hands of the New York Mets (33-25). The Cubs swept the Mets in a three-game set at Wrigley Field in April, but, as the season series shifted from the Windy City to the Big Apple, the Mets bested the Cubs on Monday.

Jake Arrieta started on the mound for the Cubs and went up against David Peterson. Both pitchers flourished early on, with the first hit not occurring until the top of the third. Each team grounded into a double play early on, and Arrieta worked around two walks in the opening frame. A single by Eric Sogard with one out in the third was followed by Arrieta laying down a sacrifice bunt. Peterson then picked off Sogard at second to end the half-inning.

Dominic Smith recorded the Mets' first hit with a base knock with one out in the fourth. Arrieta walked Billy McKinney with two outs and then gave up a base hit to James McCann. Center fielder Jake Marisnick was charged with a throwing error for his off-target heave toward the plate, which allowed Smith to score, McKinney to reach third and McCann to take second. Kevin Pillar brought home McKinney and McCann with a two-run double to left-center. Luis Guillorme was intentionally walked to bring the pitcher to the plate, and Peterson hit a tapper to end the two-out rally.

Smith put the Mets up 4-0 with a 433-foot solo shot, which carried out to straightaway center, off Arrieta with two outs in the fifth. Another two-out surge by the Mets resulted in the Cubs falling down 5-0 in the sixth. With Tommy Nance pitching, Pillar and Guillorme drew consecutive walks with two away, and Brandon Drury pinch hit for Peterson and plated Pillar via an RBI single. Rex Brothers entered to pitch and struck out Jonathan Villar, leaving runners on the corners stranded.

Trevor May entered to pitch the seventh, and Anthony Rizzo and Patrick Wisdom took him deep with one out. Rizzo's 418-foot jack to right landed in the upper deck, and Wisdom's long ball soared out to center. After striking out Marisnick, May was replaced on the bump by Aaron Loup, who fanned Jason Heyward to usher in the stretch.

Francisco Lindor was walked by Brothers to begin the bottom of the seventh, and he proceeded to steal second. Following a lineout by Smith, Pete Alonso was intentionally walked. Trevor Megill relieved Brothers after McKinney popped out, and Contreras ended the inning by picking off Alonso at first, with Rizzo applying the tag. Loup sat the Cubs down in order in the eighth, and Dillon Maples did the same to the Mets in the home half of the frame. Edwin Diaz finished off the Mets' 5-2 victory by striking the side out swinging in the ninth.