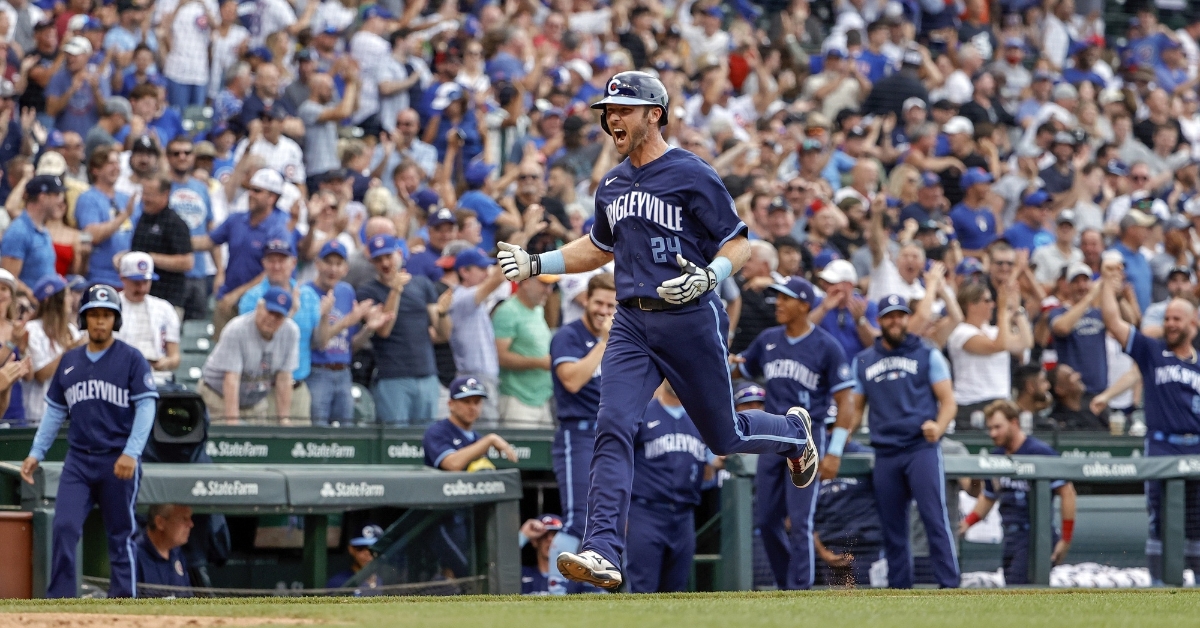 CHICAGO — A Craig Kimbrel implosion gave the Chicago Cubs (52-59) new life late in the first installment of the 2021 Crosstown Classic, but it was not enough for the North Siders to defeat the Chicago White Sox (64-46) at Wrigley Field on Friday. Kimbrel made his return to the Friendly Confines for the first time since being dealt to the South Siders at the trade deadline and coughed up a three-run lead in the bottom of the eighth. The White Sox outscored the Cubs 4-2 in extras, though, and won 8-6 in 10 innings.

Having won 11 consecutive decisions, Kyle Hendricks started on the mound for the Cubs and squared off against Lance Lynn. Adam Engel and Jose Abreu singled off Hendricks in the first, and Engel stole third before former Cubs prospect Eloy Jimenez grounded into an inning-ending double play. Ian Happ slugged a two-out double in the first, but Lynn kept the Cubs off the scoreboard. Another two-out double for the Cubs — this one by Rafael Ortega — went unused in the third.

Engel and Abreu hit back-to-back singles again in the fourth, and the White Sox were able to take advantage. Engel once again stole third on Robinson Chirinos and then came home on a single by Andrew Vaughn. After Yoan Moncada fouled out, Seby Zavala plated Abreu with a two-out base knock. After that, Cesar Hernandez was intentionally walked to get to Lynn's spot in the lineup, and Lynn struck out, leaving the bases loaded.

Greg Deichmann made his Cubs debut by starting in right field on the afternoon, and he collected his first big league hit via a fourth-inning single. Lynn walked Sergio Alcantara and Ortega in the fifth, but the Cubs remained scoreless. Jimenez walloped a leadoff double to deep right in the sixth and tagged up and reached third on an ensuing lineout. Moncada drew a walk and stole second, but Brian Goodwin, who pinch ran for Jimenez was then tagged out at the plate attempting to score on a chopper hit by Zavala. Yet again, Hernandez was intentionally walked to load the bases, and Lynn left them loaded by striking out.

Jake Jewell relieved Hendricks to begin the seventh, in which he worked around a one-out double by Engel. Andrew Romine reached on a leadoff bunt single in the seventh, which chased Lynn from the game. Michael Kopech walked Chirinos before getting Alcantara to fly out. Romine advanced to third on the flyout and scored on a sacrifice fly by David Bote. Aaron Bummer then relieved Kopech and forced Patrick Wisdom to end the inning by flying out.

Trevor Megill struck out the first two batters of the eighth but was removed after giving up a two-out single to Zavala. Kyle Ryan entered to pitch and was taken deep by Hernandez on his very first pitch, as Hernandez sent a two-run shot out to left. Matt Duffy and Frank Schwindel singled off Kimbrel in the eighth, setting the stage for Romine to tie the game with a three-run dinger. Marking Romine's first MLB homer in four years, the game-tying jack barely cleared the wall in right-center, tying the game at 4-4 with two outs in the eighth and bailing out Hendricks, who was in line for the loss.

PUT IT ON THE BOARD! César's first home run in a White Sox uniform came at the perfect time.#ChangeTheGame | @NBCSChicago pic.twitter.com/R8DTRVgSJA

Chirinos followed up Romine's long ball with a single that chased Kimbrel from the game and brought Liam Hendriks out of the bullpen. Johneshwy Fargas pinch ran for Chirinos and stole second, but Hendriks fanned Alcantara to usher in the ninth. Interestingly, Codi Heuer, who was part of the recent Kimbrel trade, pitched the ninth for the Cubs and fared well against his former team. He walked Engel prior to drawing an inning-ending double play off the bat of Abreu.

Hendriks stayed in to pitch the ninth, which saw Duffy poke a two-out single through the infield and steal second. Duffy was stranded by Happ striking out. Manuel Rodriguez proceeded to give up a leadoff two-run blast to Goodwin in the 10th. The shot to left scored Abreu, who began the inning at second. Vaughn then reached and also took second because of a throwing error committed by Duffy at third, as his throw carried into the visiting dugout and out of play. Moncada and Gavin Sheets then hit two straight singles, with Vaughn scoring on Sheets' base knock.

Michael Rucker pitched the rest of the top half of the 10th, giving up a two-out single to Tim Anderson that brought Moncada across. Schwindel answered Goodwin with a leadoff two-run homer of his own in the bottom of the 10th, scoring Happ with a 402-foot bomb to left-center for his first home run as a Cub. Garrett Crochet collected himself after giving up the round-tripper and drew three straight outs. Due to the Cubs using all of their active position players, Zach Davies pinch hit for Rucker with two outs and lined out to end the Cubs' 8-6 defeat at the hands of their crosstown rivals.