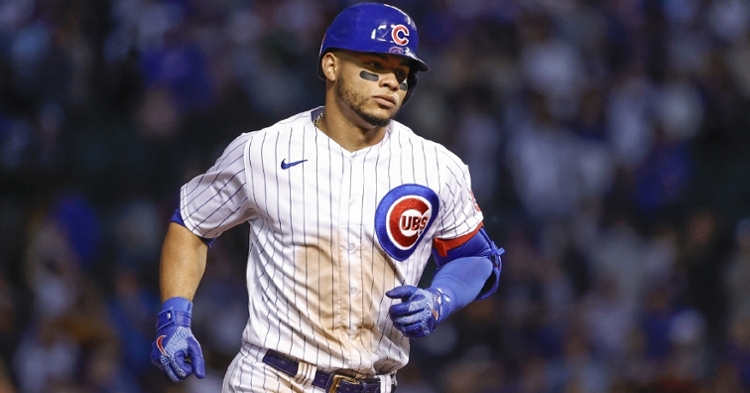 CHICAGO — In Monday's series-opening victory by the Chicago Cubs (31-23) over the San Diego Padres (34-22), the Cubs won 7-2 and scored all seven of their runs via five home runs. The homer-happy Cubs won in a similar fashion on Tuesday, with a pair of two-run jacks from Patrick Wisdom and Willson Contreras, respectively, contributing to a 4-3 Cubs triumph atop the Padres. All three of the Padres' run came via the home run ball, as well, but the Cubs held the Padres scoreless outside the fifth inning and earned a win at Wrigley Field.

Ryan Weathers, son of longtime big league pitcher David Weathers, started on the bump for the Padres, and Anthony Rizzo, who returned from a six-day injury layoff, took him for a two-out single in the first. Weathers then picked Rizzo off at first to end the inning. Javy Baez drew a leadoff walk in the next inning, and Patrick Wisdom, who homered twice on Monday, smacked a two-run jack to left that plated Baez. Sergio Alcantara doubled a few at-bats later but did not score.

Contreras took advantage of center fielder Jurickson Profar loafing to field a routine knock and hustled for a leadoff double in the third. However, Profar made up for it by gunning down Contreras, who tagged up on a Kris Bryant flyout, at third soon afterward. Meanwhile, Kyle Hendricks was superb in the early goings, with Weathers, of all people, recording the first hit allowed by Hendricks on the evening by way off a two-out single in the third.

Manny Machado kicked off the fourth with a long single and then moved to second on a bunt by Jake Cronenworth. Hendricks kept the Padres scoreless in the top of the fourth, but he went on to give up a couple of two-out homers in the top of the fifth. Victor Caratini, Hendricks' former batterymate with the Cubs, smacked a 440-foot solo shot out to center, and, following another single by Weathers, Tommy Pham swatted a go-ahead two-run jack over the center field wall. Machado then singled, but Hendricks struck out Cronenworth to get out of the half-inning.

A leadoff single by Alcantara in the home half of the fifth was followed by Machado making a risky throw to Fernando Tatis Jr. at second after charging and fielding a bunt by Hendricks. The daring decision by Machado paid off, as Tatis scooped up the bounced throw for a putout. However, Contreras then regained the lead for the Cubs by scorching a 445-foot two-run bomb into the center field seats, thus scoring Hendricks. Weathers did not retake the mound in the sixth, as Craig Stammen relieved him.

After pulling off the aforementioned defensive feat, Machado flipped the script by making an errant throw to first upon gloving an Ian Happ grounder in the sixth. Wisdom then singled, advancing Happ to second, but both runners were left on base. Eric Sogard doubled off Stammen to begin the bottom of the seventh and slid in safely when shortstop Ha-Seong Kim opted to throw to Machado at third after fielding a grounder hit by Bryant. Kim replaced an injured Tatis, who departed the game in the sixth with right oblique tightness, made a risky decision similar to the one made by Machado earlier in the contest, but Sogard beat the throw.

The play was scored as a fielder's choice, and Bryant went on to steal second when Caratini was unable to cleanly catch a low pitch. However, after Rizzo popped up onto the infield for the second out, Baez struck out swinging to leave the two runners stranded in scoring position. The Cubs did not need any insurance runs, though, as Ryan Tepera, Andrew Chafin and Craig Kimbrel combined to pitch three scoreless frames out of the bullpen. Tepera pitched the seventh, and Chafin pitched the eighth. Kimbrel finished the Padres, a former team of his, off by striking out the side in the ninth and locking up the North Siders' 4-3 win.