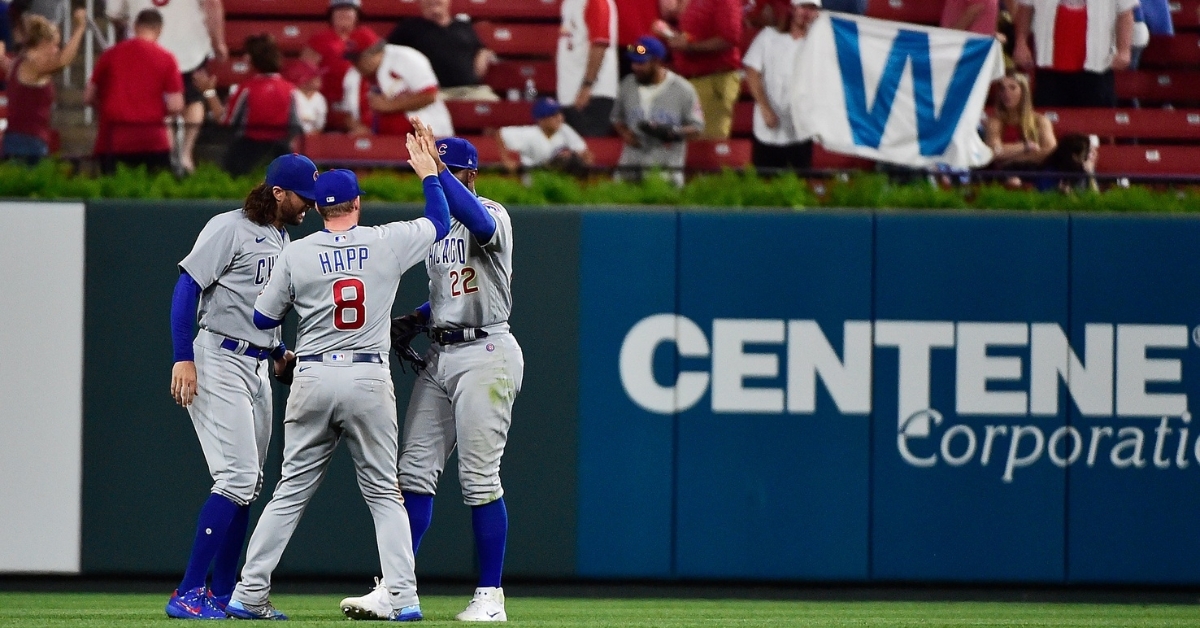 ST. LOUIS — With just three hits all night and the player who scored the team's lone run out of the game due to an injury, the Chicago Cubs (47-48) entered the ninth inning trailing 6-1 and on the verge of suffering a largely forgettable loss to the rival St. Louis Cardinals (47-48). Multitudinous fans had already headed for the exits at Busch Stadium, thinking that the Cardinals had no chance of squandering their five-run lead, but those who remained in their seats witnessed what could be described as both a stunning comeback and epic implosion. The Cubs plated six runs in the top of the ninth and won 7-6 on Tuesday, making for one of the most unbelievable victories in franchise history.

Johan Oviedo made his 17th career start on the mound for the Cardinals in search of his first winning decision as a major leaguer, and he was line to earn the win after tossing five innings of one-run ball. For the Cubs, Trevor Williams made his first appearance since July 6 and first start since May 26 and was tagged for four runs in his five innings of work. Williams dodged a bullet when Paul Goldschmidt nearly hit a home run in the bottom of the first. Umpires ruled that the drive to right caromed off the glove of a fan in foul territory before bouncing off the base of the foul pole. At the conclusion of a replay review initiated by the crew chief, the call was upheld.

Btm 1st - Crew Chief reviews call that Paul Goldschmidt did not hit a home run; call confirmed, the ball was touched by the spectator in foul territory, no home run. Powered by @Mitel. pic.twitter.com/yPXNap65hy

Oviedo sat the Cubs down in order in the opening frame but let a slider get away from him on the first pitch of the next frame. Kris Bryant was plunked as a result and he made it to second on an ensuing groundout by Jason Heyward. A single by Patrick Wisdom placed runners on the corners, and Bryant came home on a Nico Hoerner groundout. With Wisdom at second, Rafael Ortega was intentionally walked to bring Williams to the plate, and Williams grounded out to end the half-inning. Following a leadoff single by Tyler O'Neill in the home half of the second, Yadier Molina grounded into a 5-4-3 double play. Anthony Rizzo was hit by a pitch in the third but did not advance beyond first.

Bryant started in left on the evening and flashed the leather with a diving catch to kick off the bottom of the third, robbing Paul DeJong of a hit. Unfortunately, Bryant displayed signs of discomfort after laying out for the grab and was later replaced in the lineup by Ian Happ. Bryant was pulled midway through the fifth due to right hamstring fatigue. In the wake of Bryant's web gem, Harrison Bader hit a bloop double and headed to third on an Oviedo groundout. Dylan Carlson pushed Bader across with a two-out double, with Bryant nearly gunning him down at second, and Goldschmidt struck out thereafter.

After not playing in the Cardinals' 8-3 win over the Cubs on Monday, a rested Nolan Arenado led off the bottom of the fourth with a 406-foot jack to left. Molina hit a single with one out, and DeJong drew a walk with two outs. Bader ushered Molina home with a single, and Oviedo poked a single through the infield to bring home DeJong. Heyward then made a backhanded catch while sliding across the grass in right to prevent Carlson from extending the inning. A throwing error committed by shortstop Javy Baez, who was charged with two errors on Monday, enabled O'Neill to reach with two away in the fifth. O'Neill stole second, but Williams fanned Molina to leave him stranded.

Oviedo was pulled following a leadoff single by Baez in the sixth. Genesis Cabrera toed the rubber and walked Happ after Baez stole second. Heyward and Wisdom both struck out prior to Hoerner drawing a walk to load the bases. Jake Marisnick entered to pinch hit for Ortega, and the Cardinals strategized during a mound visit. Marisnick then swung at the first pitch and popped up onto the infield, wasting the bases-loaded opportunity. In the bottom of the sixth, Tommy Edman slugged a leadoff dinger 417 feet to left off Brothers. With two outs, Jose Rondon took Brothers deep for his first homer as a Cardinal. The 405-foot solo shot to left put the Redbirds up 6-1.

Ryan Helsley tossed a 1-2-3 top half of the seventh, and Ryan Tepera worked around a leadoff single by Goldschmidt in the bottom half of the same inning. The Cubs were once again retired in order in the eighth, which Justin Miller pitched. With Dillon Maples on the hill, the Cardinals also went three up, three down in the eighth, and Luis Garcia emerged from the bullpen to pitch the ninth. Wisdom led off the ninth and struck out swinging on a wild pitch. However, he reached base on the dropped third strike, which Molina arguably should have been able to stop. Hoerner then hit a single to shortstop, and Wisdom made it to third because of an errant throw from DeJong.

Garcia walked Marisnick to load the bases with no outs, and Alex Reyes relieved him. In his previous outing on Sunday, Reyes set an MLB record for converting the most consecutive save opportunities to start a career in big league history, as he became 24-for-24 in save chances in the majors. The All-Star closer had never blown a save for the Cardinals, but he was unable to keep that streak alive. First, Reyes walked Sergio Alcantara to force home Wisdom. Then, he struck out Willson Contreras. Next, Rizzo drew a walk, which plated Hoerner. After that, Baez swatted a base hit up the middle, scoring Marisnick and Alcantara.

With the Cubs trailing by one run, Happ, who has struggled to come up with pivotal hits all season long, stepped up to the plate. On a 2-2 count, Happ completed the comeback and provided the Cubs with their first lead since the score was 1-0 by slapping a double down the right field line. Baez and Rizzo scored with ease, giving the Cubbies a 7-6 advantage over the Cards. Reyes was then pulled, and Giovanny Gallegos was handed the baseball. A Heyward groundout moved Happ to third, but Gallegos struck out Wisdom to end the rally.

Craig Kimbrel tallied a pair of strikeouts in the bottom of the ninth, as the Cardinals went down in order to cap off what was assuredly their most sickening defeat in quite some time. After not manufacturing much offense at all in the first eight frames, the Cubs scored six runs in the ninth and pulled off a miraculous come-from-behind triumph against their fiercest foes. The 7-6 win was the first victory recorded by the Cubs in which they trailed by five or more runs through eight innings since 1979.