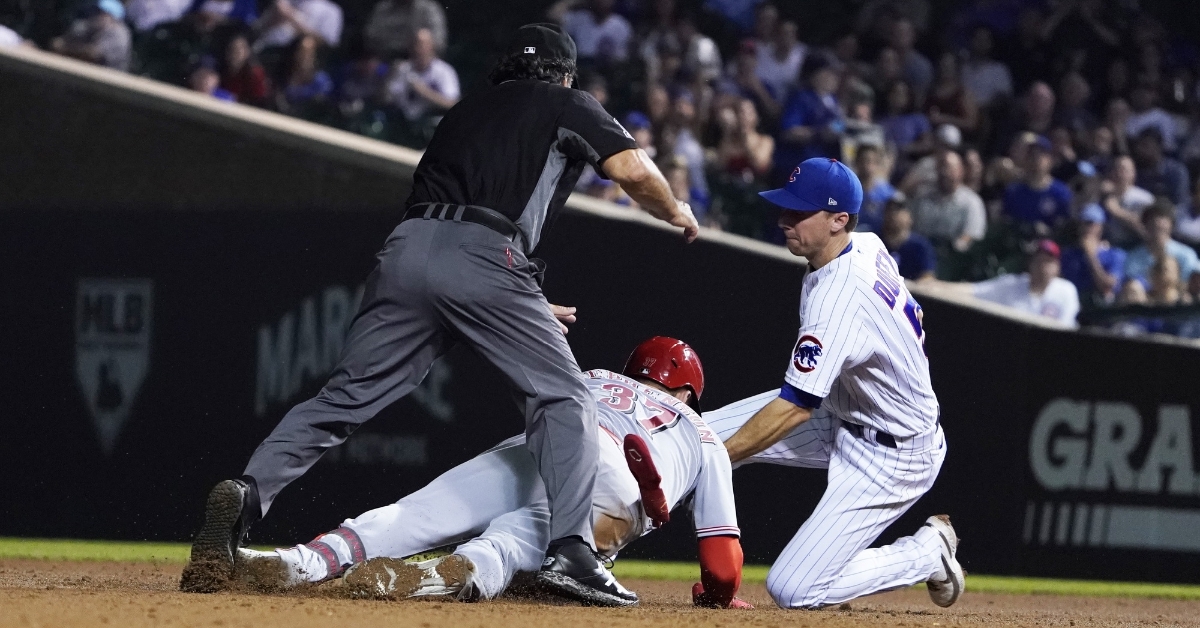 CHICAGO — Held scoreless through eight innings at Wrigley Field, the Chicago Cubs (50-53) did not put up much of a fight against the Cincinnati Reds (53-49) on Wednesday. Joey Votto led the way for the Reds by continuing to rake in the series and powering out two home runs for the second straight night. Adding injury to insult for the Cubs in their 8-2 defeat was Nico Hoerner injuring his right oblique on a checked swing, which resulted in him exiting the game.

After Zach Davies recorded a 1-2-3 top of the first, the Cubs threatened to score off Tyler Mahle via a two-out rally in the bottom of the first. Anthony Rizzo singled, and Patrick Wisdom then smacked a ground rule double. Matt Duffy drew a walk that loaded the bases, but Aristides Aquino then made a great running catch in right to rob Jason Heyward of a hit. Votto led off the second with a dinger to left, extending his homer streak to five consecutive games.

The second frame ended with another nice grab, as second baseman Jonathan India gloved a hard-hit liner off the bat of Rafael Ortega. Hoerner doubled earlier in the inning and was stranded at third by India's web gem. India scored in the following inning, as he drew a walk that was followed by an RBI double from Jesse Winker. Kyle Farmer began the fourth with a double, but Davies struck out the next three batter. After Hoerner tallied a two-out walk in the fourth, Davies made solid contact on a line drive to right, but Aquino hauled in another inning-ending running catch.

A leadoff base hit by India gave way to a Winker double in the fifth. Tyler Stephenson plated India and Winker with a knock to deep left-center after that but was gunned down at second by Kris Bryant, with Duffy applying the tag. Heyward ended the half-inning with an impressive leaping catch near the right field line to out Farmer. Patrick Wisdom started the bottom of the sixth by tabbing a single, but Heyward grounded into an inning-ending double play a few at-bats later. With Davies out of the game after receiving no run support, Adam Morgan retired the side in order in the seventh.

The Cubs went three up, three down with Luis Cessa pitching the eighth. Hoerner struck out swinging in the eighth on a checked swing that he did not appear to go around on. He did not argue the call, though, as he seemed more concerned by the pain he experienced in his right side. After wincing in obvious pain, Hoerner was removed from the game and later diagnosed with right oblique tightness. Bryant took over for Hoerner on defense, moving from left field to shortstop, and has now played six different positions this season.

Nico Hoerner seems to injure his right side after failing to hold up on a check swing strikeout in the 7th and has been pulled from the ballgame.@Cubs #GoCubsGo pic.twitter.com/WHAOanc96n

Dillon Maples pitched the eighth and got off to a rocky start by giving up a leadoff double to Eugenio Suarez and hitting Farmer with a pitch. With one out and the bases loaded, Maples plunked Shogo Akiyama to force home Suarez. Former Cub Justin Wilson worked around a leadoff walk of Ortega in the eighth. Cory Abbott was taken deep by Votto after issuing a leadoff base on balls to Stephenson. Votto's two-run dinger sailed 421 feet out to center. Akiyama went on to plate Farmer with a two-out double. Ian Happ then flashed the leather by laying out for a superb catch in left, snagging a liner hit by India.

We promise this isn't spam... Joey Votto is just that good. pic.twitter.com/8ibUvQYwrf

Not a great game overall for the Cubs. But this was a great catch by Ian Happ. Per Statcast, had a 30% catch probability. pic.twitter.com/XILyHm6Tdf

Duffy led off the ninth with a single that got by Suarez at third and rolled into left. He took second because to fielder's indifference and advanced to third on a ground ball. Bote drove Duffy home with a two-out single that prevented the Cubs from suffering a home shutout. Bote moved up to second due to fielder's indifference and scored when India made an errant throw to first after making a difficult stop of a screamer hit on the ground by Happ. Happ made it all the way around to third by way of fielder's indifference but was not brought home, as the Cubs' 8-2 loss versus the Reds ending with Ryan Hendrix, who pitched the entire half-inning, forcing Ortega to fly out.