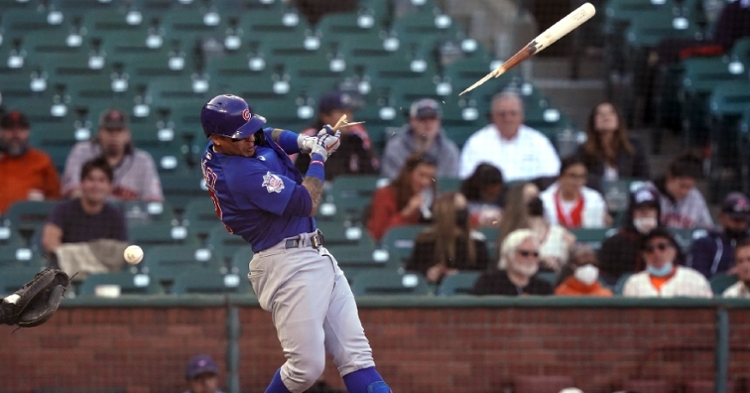 SAN FRANCISCO — Despite being given new life in the ninth inning, thanks to a series of defensive woes suffered by the San Francisco Giants (37-21), the Chicago Cubs (32-26) fell short and lost their third straight on Saturday. The Giants were led by a dominant seven-inning start on the mound by Kevin Gausman and won 4-3 at Oracle Park, setting up a potential sweep of the four-game set on Sunday. While Jason Heyward returned after missing a few weeks due to injury, Joc Pederson left the contest due to lower back tightness.

Kohl Stewart made his second start in a Cubs uniform but did not fare as well as he did in his debut, giving up three runs on seven hits and two walks in 3 2/3 innings pitched. Stewart allowed two Giants to reach base with two outs in the first and then collected one of his five strikeouts to end the frame. Brandon Crawford reached on an infield single, with second baseman Eric Sogard unable to make a clean throw to Anthony Rizzo at first following a diving stop. Crawford went on to commit a fielding error at shortstop when attempting to field a Rizzo grounder to lead off the second. With two outs, Rizzo was plated by a 418-foot two-run jack hit by Patrick Wisdom out to straightaway center.

Leading off third with his first career hit, Stewart singled, but Gausman then struck out three batters in a row. Alex Dickerson put the Giants on the scoreboard went yard with a two-out solo shot to left in the bottom of the third. He also homered in Friday's matchup. Evan Longoria hit a ground-rule double in the next at-bat but was left stranded by Crawford striking out looking.

On the board, courtesy of Alex Dickerson ?? pic.twitter.com/BtfWXJioE0

Stewart walked Steven Duggar to begin the bottom of the fourth and gave up a one-out single to Jason Vosler. Making his first start of the season, Chadwick Tromp then hit an RBI single that scored Duggar. A sacrifice bunt by Gausman advanced both baserunners, and LaMonte Wade Jr. gave the Giants the lead with an RBI single, scoring Vosler. Tommy Nance relieved Stewart at that point and forced Dickerson to pop out. Evan Longoria drew a leadoff walk off Daniel Winkler in the fifth, and Crawford then plated Longoria with an an RBI double off the wall in right.

Gausman retired the Cubs in order in the sixth, with Baez sending most of his broken bat flying into the stands upon fouling off a pitch. Baez proceeded to strike out swinging, ushering in the bottom half of the frame, which Cory Abbott pitched. Abbott was called up earlier in the day and made his MLB debut with two scoreless innings of work. Prior to that, Pederson exited the game in the fifth inning after experiencing tightness in the right side of his lower back, which was apparently caused by him leaping into the outfield wall when attempting to rob Dickerson of his aforementioned homer.

Watch as Javy Baez' broken bat sails into the stands and lands literally in the lap of a good-natured fan.@Cubs #GoCubsGo @SFGiants pic.twitter.com/dZlKn3Vk6U

Following a scoreless bottom half of the eighth pitched by Ryan Tepera, Rafael Ortega, who replaced Pederson in the lineup, reached as the leadoff hitter in the ninth because of a fielding error committed by second baseman Mauricio Dubon. Dubon lost control of the baseball while attempting to exchange it from his glove to his throwing hand, allowing Ortega to reach safely on what should have been a routine groundout.

The same gaffe haunted Dubon again in the next at-bat, as he was unable to smoothly engage the ball from his glove to his right hand on a potential double play groundout. Although Ortega was called out at second, Kris Bryant made it to first on the fielder's choice and then advanced to third on a single hit up the middle by Baez. The ninth-inning defensive implosion continued for the Giants wen Crawford and Longoria collided while pursuing a dribbler off thee bat of Rizzo.

Scary collision between Evan Longoria and Brandon Crawford while going for a ground ball. pic.twitter.com/hB86pr7b8M

Longoria was shaken up and left the game following the fielding error, which he was charged with, and Dubon replaced him at third base, while Donovan Solano entered to serve as the second baseman. Submarine pitcher Tyler Rogers remained composed and struck Willson Contreras out swinging. Baez and Rizzo then pulled off a double steal, but Heyward grounded out to end the game shortly thereafter, with the Giants hanging on for a 4-3 victory.