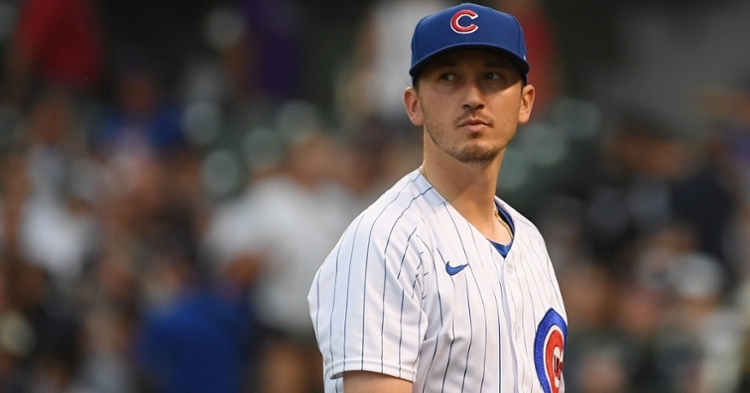 CHICAGO — Giving up three home runs in the top of the first, Zach Davies fell into an early 5-0 hole, and the Chicago Cubs (52-61) never climbed out of it. The Chicago White Sox (66-46) wrapped up a three-game sweep of their crosstown rivals by hitting four homers in all on Sunday night. Former Cubs prospect Eloy Jimenez went yard twice for the White Sox, and the South Siders downed the North Siders 9-3 at Wrigley Field. Light rain fell in the middle innings, but a weather delay was never implemented.

Tim Anderson set the tone on the very first pitch of the game, taking Davies deep with a blast to right-center. Adam Engel hit an ensuing single and was plated via a 409-foot two-run shot that sailed out to center off the bat of Jimenez. Following a walk of Yoan Moncada, Andrew Vaughn blistered a pitch 407 feet into the center field bleachers. The two-run bomb provided the White Sox with a five-run lead.

There's an A.V. Club meeting in the outfield bleachers. pic.twitter.com/1ixJNQTCbj

Along with Jimenez, former Cubs prospect Dylan Cease was traded to the White Sox as part of the Jose Quintana deal in 2017. Cease started on the mound on Sunday and worked around a leadoff single by Rafael Ortega in the first. Anderson and Jose Abreu singled in the second and were scored via a two-out double by Jimenez.

Patrick Wisdom drew a leadoff walk in the second and made it to second a wild pitch. Greg Deichmann flied out to the warning track in right, with Vaughn making the catch at the wall. Sergio Alcantara was walked with two outs, and another wild pitch advanced both runners. Frank Schwindel pinch hit for Davies and hit a two-run base knock to put the Cubs on the board. Schwindel advanced to third on an Ortega single, and Ortega proceeded to steal second. Matt Duffy struck out looking to end the inning.

Jake Jewell pitched the third, which began with Vaughn drawing a walk. Cesar Hernandez grounded into a fielder's choice and was then thrown out by Willson Contreras on a steal attempt. Jewell struck out Seby Zavala to usher in the home half of the inning. In the third, Contreras slugged a one-out double off the top of the wall in left. After David Bote walked with two outs, Deichmann collected his first career RBI with a bloop hit that plated Contreras. Cease then forced Alcantara to fly out.

Jewell and Cease both went 1-2-3 through the fourth, but Jimenez powered out his second dinger of the evening by going yard off Michael Rucker with one out in the fifth. The solo jack to right-center placed the White Sox up 8-3. Cease struck out the side in the fifth, and Rucker also retired the side in order in the sixth. Vaughn once again came up with a nice snag in right to prevent Deichmann from collecting a hit when he hauled in a running catch with Reynaldo Lopez pitching.

Manuel Rodriguez plunked Engel with the first pitch of the seventh, and Engel, who stole second and reached third on a groundout, scored on a two-out single by Vaughn. Kyle Ryan gave up a two-out double to Anderson in the seventh but prevented the White Sox from adding to their lead. Former Cub Ryan Tepera breezed through the eighth, with the Cubs going three up, three down, and Jose Ruiz struck the side out swinging in the ninth, finishing off the 9-3 contest, in which the Cubs struck out 16 times. The Cubs suffered a three-game sweep at home versus the White Sox for just the third time ever.