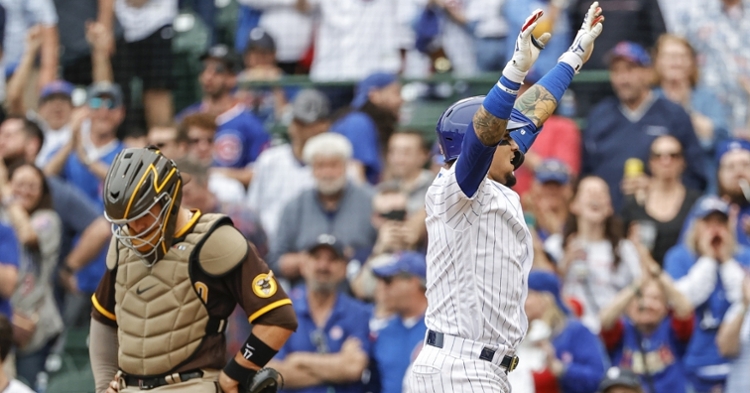 CHICAGO — On a homer-heavy afternoon at Wrigley Field, the Chicago Cubs (30-23) downed the San Diego Padres (34-21) behind five home runs. Javy Baez and Patrick Wisdom each went yard twice, with Wisdom recording his first career multi-homer performance, and Kris Bryant also sent one out, with the Cubs scoring all seven of their runs via five dingers. Winning 7-2 on Monday, the Cubs were victorious in their first meeting of the season with the Padres.

Kohl Stewart started on the mound in his Cubs debut because Trevor Williams was scratched after undergoing an emergency appendectomy on Sunday. He breezed through a 1-2-3 top half of the first and went on to pitch five innings, in which he was not charged with any earned runs. The lone run scored by the Padres during Stewart's outing was made possible by Baez making an errant throw to first upon fielding a grounder hit by Fernando Tatis Jr. to lead off the second inning. The throwing error allowed Tatis to reach second base, and an RBI single by Wil Myers plated him.

Jurickson Profar followed Myers' RBI knock with a base knock that moved Myers to third, but former Cub Caratini then grounded into an inning-ending 4-6-3 double play after receiving a standing ovation from Cubs fans in attendance. Chris Paddack walked Willson Contreras in the second and gave up a single to Wisdom that enabled Contreras to reach third. Wisdom stole second, but Eric Sogard ended the frame by striking out, leaving both runners stranded in scoring position.

Victor Caratini gets a standing ovation in his first at-bat back at Wrigley Field. ????

The third inning began with Stewart plunking Paddack, but Stewart drew a 5-4-3 double play groundout off the bat of Tommy Pham soon afterward. Bryant notched his first triple of the year with two outs in the third, and Baez proceeded to smash a 455-foot blast, which caromed off the batter's eye, out to straightaway center field. Baez's go-ahead two-run jack provided the Cubs with a lead they did not relinquish. Wisdom added to the lead by walloping a 423-foot bomb, which also bounced off the batter's eye, with two outs in the fourth.

Prior to Wisdom's first long ball of the game, Stewart ended the top of the fourth with an impressive web gem, as he pulled off a behind-the-bag snag of a comebacker hit by Profar, which was preceded earlier in the frame by Tatis juking out Sogard at second on what was a missed opportunity for a double play. After fielding Profar's chopper cleanly, Stewart completed the putout with an underhanded toss to Bryant at first. Speaking of Bryant, he lofted a two-run shot out to right in the bottom of the fifth. The round-tripper, which landed in the basket atop of the wall, scored Sergio Alcantara, a recent call-up who hit a leadoff double in the fifth for his first hit in a Cubs uniform.

Paddack was yanked after giving up the Bryant homer, and Steward was relieved by Keegan Thompson to begin the sixth. Tatis took Thompson deep for his MLB-leading 16th homer of the season with two outs in the sixth, but Wisdom got the run back by powering a solo shot out to right-center, where Tatis' tater also landed, in the bottom half of the same inning. Tim Hill gave up Wisdom's second homer of the contest. Sogard walked after that, and Thompson moved him to second with a sacrifice bunt, but Sogard was left stranded.

There's a tie at the top.

Baez rounded out the scoring via a towering jack to center in the seventh, with Nabil Crismatt offering up the pitch that Baez sent into the seats for his second home run of the tilt. Thompson and Andrew Chafin combined to pitch a scoreless top of the eighth. Rafael Ortega collected a leadoff single in the bottom of the eighth but was subsequently thrown out from behind the plate by Caratini when attempting to steal second. Tommy Nance sat the Padres down in order in the ninth, striking out a pair and putting the finishing touches on the Cubs' 7-2 victory.