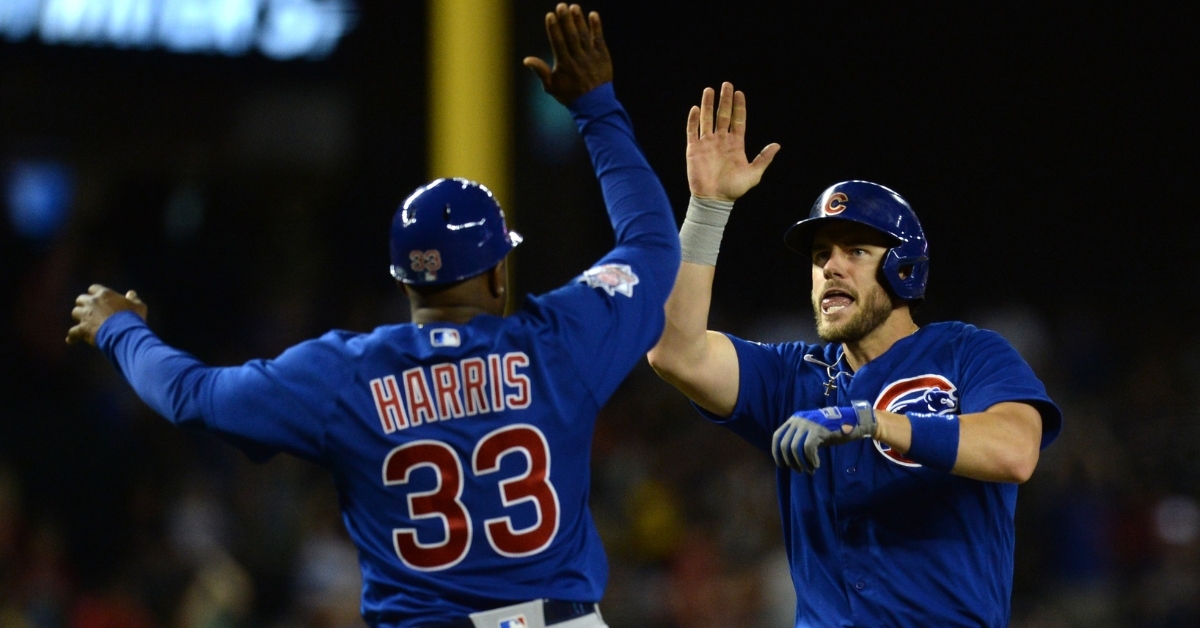 PHOENIX — Starting the unofficial second half of the regular season off on the right foot, the Chicago Cubs (45-46) hit three home runs in their first game back from the All-Star break and defeated the Arizona Diamondbacks (26-67) on Friday. A pair of solo shots by Anthony Rizzo and Patrick Wisdom and a two-run blast by Jason Heyward contributed to the North Siders winning 5-1 at Chase Field. Kyle Hendricks pitched six innings of one-run ball, striking out four and earning the winning decision.

Madison Bumgarner also produced a six-inning start, in which he tallied six strikeouts, but he gave up two runs and was handed the losing decision. Willson Contreras opened the game with a walk, but Anthony Rizzo went on to ground into an inning-ending double play. The Cubs took the lead in the second inning, though, thanks in large part to Javy Baez's baserunning. Baez, who now boasts a six-game hitting streak, poked an outside pitch into left-center for a leadoff single and then stole second. Catcher Bryan Holaday committed a throwing error on the steal that enabled Baez to head to third after swiping second. David Peralta made a nice catch in left to rob Jake Marisnick of a hit, but Baez tagged up and scored from third.

Javy extends his hitting streak and makes it count!#CubTogether pic.twitter.com/XeusOBLXyK

Pavin Smith ended the second frame by lining into an unassisted double play. Anthony Rizzo caught the line drive at first and stepped on the bag to double off Peralta. Holaday hit a one-out single in the third and scored on a two-out game-tying double by Josh Rojas. Rizzo regained the lead for the Cubs by smacking a 413-foot solo shot to right-center with one out in the fourth. A Christian Walker double and walks drawn by Peralta and Smith loaded the bases with one away in the home half of the fourth. Walker opted not to test Kris Bryant's arm when Bryant caught a fly ball in right, and Hendricks then left the bases juiced by notching an inning-ending punchout.

Rojas swatted a ground rule double out to center with one out in the fifth but did not make it beyond second. In the sixth, Rizzo was plunked in the back with a pitch that got away from an apologetic Bumgarner. Baez then ended the half-inning by striking out swinging. Walker reached via a leadoff infield single in the sixth. Second baseman Nico Hoerner laid out for a diving stop, but his throw to first was not in time. Peralta grounded into a 3-6 double play after that, and Hendricks maintained the Cubs' lead in his final inning of work.

Wisdom crushed a towering 405-foot solo bomb just inside the left foul pole with one out in the top of the seventh. Nico Hoerner then drew a walk but was called out when a screamer hit by Ian Happ ricocheted off his foot. Jason Heyward pinch hit for Kyle Hendricks with two away and went yard. The 384-foot two-run dinger marked the first pinch-hit home run of Heyward's career. Matt Peacock gave up both seventh-inning jacks. In the bottom of the seventh, Ryan Tepera beaned Andrew Young and got taken for a single by Kole Calhoun. However, the Diamondbacks, who left eight on base in the loss, failed to score.

Rizzo and Baez hit back-to-back singles off Jake Faria in the top of the eighth. The Cubs were unable to add to their lead but former D-back Andrew Chafin retired the side in order in the bottom of the eighth. Hoerner tabbed a leadoff single with J.B. Bukauskas on the mound in the ninth. Rafael Ortega later grounded into a fielder's choice, which resulted in Hoerner being outed at second, and was caught stealing second to end the half-inning, with Holaday throwing him out. Ortega was initially called safe, but a successful Diamondbacks challenge overturned the original ruling. Craig Kimbrel then struck out a pair as part of a 1-2-3 ninth that finished off the Cubs' 5-1 victory.

Top 9th - @Dbacks challenge call that Rafael Ortega is safe at 2B; call is overturned, runner is out. Powered by @Mitel. pic.twitter.com/AVknLpASfF