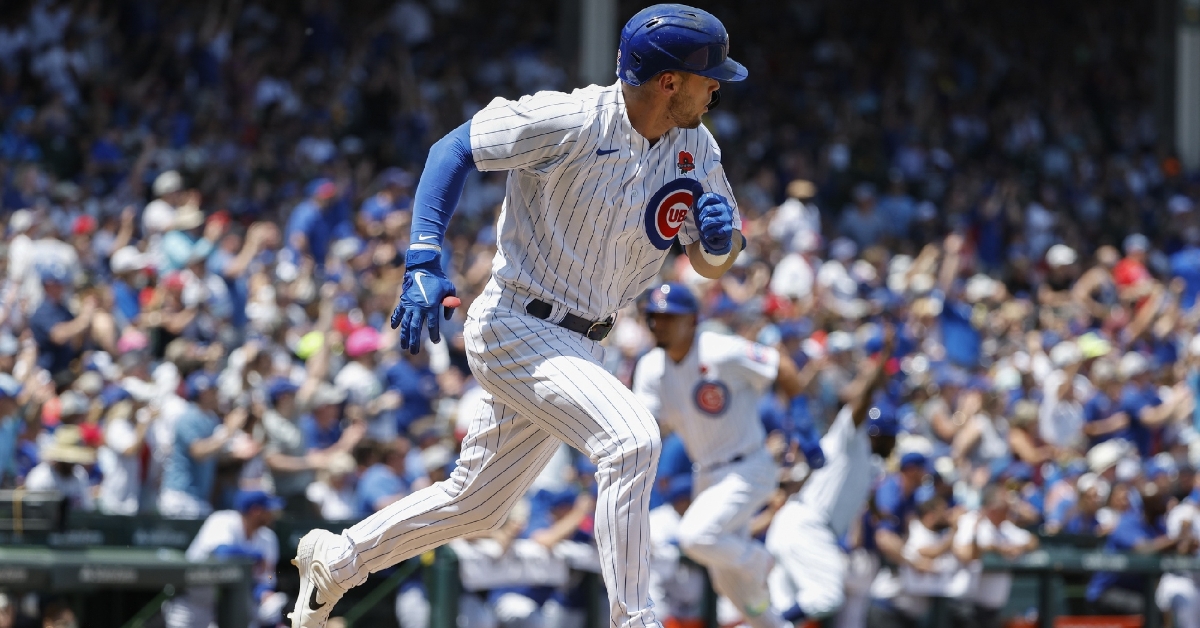 CHICAGO - Regardless of what their record ends up this week, fans will get a real good sense of where these Chicago Cubs (19-28) are against the top teams in the NL Central. Not only do they have a doubleheader with the Division Leading Milwaukee Brewers (31-18) on Monday, but they will have another doubleheader against St. Louis on Saturday.

That makes for nine games across a seven-day homestand as Wrigley Field will be very busy this week. Along with that, the Cubs have had to make countless roster moves as injuries are starting to pile up again. The latest saw Jonathan Villar head to the IL with a facial injury paving the way for Nelson Velazquez to make his MLB debut.

Velazquez wasn't alone as Matt Swarmer got the call to start game one of the doubleheader against Ethan Small. Although Swarmer gave the Cubs six great innings of four-run ball, (one run earned), he ended up on the short end of the stick as a late-game homer off of Daniel Norris proved to be the difference in the 7-6 Brewers win.

While Swarmer was on point early, striking out a pair in the first inning, the Cubs wasted a golden opportunity in the bottom of the first after the leadoff Christopher Morel double got them nowhere. Velazquez followed suit with his first major league hit in the second inning, but the Cubs were again kept off the scoreboard.

It was in the top of the third when the Brewers broke through first as Jace Peterson took Swarmer deep for the 1-0 lead. The long ball has always been an issue for Swarmer, but that hasn't been the case this season, which is why he has had the success he has had thus far.

Moving to the bottom of the third and the Cubs saw their offense in business and chased Small from the game after just 2 2/3 innings. With Rafael Ortega starting things off with a single, but after a double play wiped away two base runners, the Cubs had two runners on again with two outs. That set the stage for Nico Hoerner, who continues to see the ball well as his two-run single put the Cubs in front 2-1.

The Brewers managed to tie things up again in the fourth inning after Omar Narvaez singled and reached second via the error, and came home to score on the Keston Hiura single. That quick strike didn't deter the Cubs from battling back as P.J. Higgins and Ortega opened up the bottom of the fourth with back-to-back homers, and just like that, the Cubs were back in front 4-2.

When the game started, fans didn't know what to expect from Swarmer, but after watching him allow just one earned run to go with six punchouts in six innings, they have to like what they saw. Someone who may not be up beyond today, Swarmer has proven to be the most consistent starter in Iowa not named Caleb Killian and could easily see himself on this roster again before the season ends.

Still holding a two-run lead in the sixth, the Cubs defense didn't do him any favors as a leadoff error allowed Luis Urias to reach base. With two down in the inning and a chance to get out of it, Tyrone Taylor made the Cubs pay for that error as he connected for the Brewers second homer of the day to tie things up 4-4. That signaled the end of the road for Swarmer, as his otherwise impressive start was for nothing.

In what was now a battle of the bullpens, the Cubs bullpen has been shaky lately, and that continued with Daniel Norris on the mound in the seventh. A leadoff hit by pitch did him little favors, but after inducing a double play, Norris was on the verge of escaping with no damage.

Following the Mike Brosseau Single and Kolton Wong walk, the Brewers managed to keep the inning alive and had the go-ahead run in scoring position. That go-ahead run turned into three as Urias connected for his fifth homer, putting the Brewers back in front 7-4 as that hit proved to be the game-winner.

Trevor Gott was next to pitch for the Brewers in the bottom of the seventh and immediately ran into his own set of trouble. If a leadoff single to Willson Contreras wasn't bad enough, why not Patrick Wisdom and Hoerner add singles shortly after, with Hoerner driving in his thrid run to make things 7-5. The next batter saw was Ian Happ, who, although he made an out, did what he needed to do, bringing home another run to make things 7-6.

A scoreless eighth from Norris paved the way for Devin Williams in the bottom of the ninth, with the Cubs having a chance to tie things up. With Ortega reaching base with a one-out single, a costly two-out error put a pair of runners on base. The Cubs cubs continued to keep the pressure on, with Frank Schwindel working a walk to load the bases, but they came away empty-handed in the end.

Down to their final three outs and facing the best reliever in the game in Josh Hader, Hoerner got things started positively, picking up a leadoff hit to put the Cubs in business. That had to be considered a win for the Cubs as Hader recovered to strike out the next three hitters to seal the win for the Brewers and picked up his 17th save of the season. Hader still has yet to allow an earned run this season and has been the very definition of dominant.