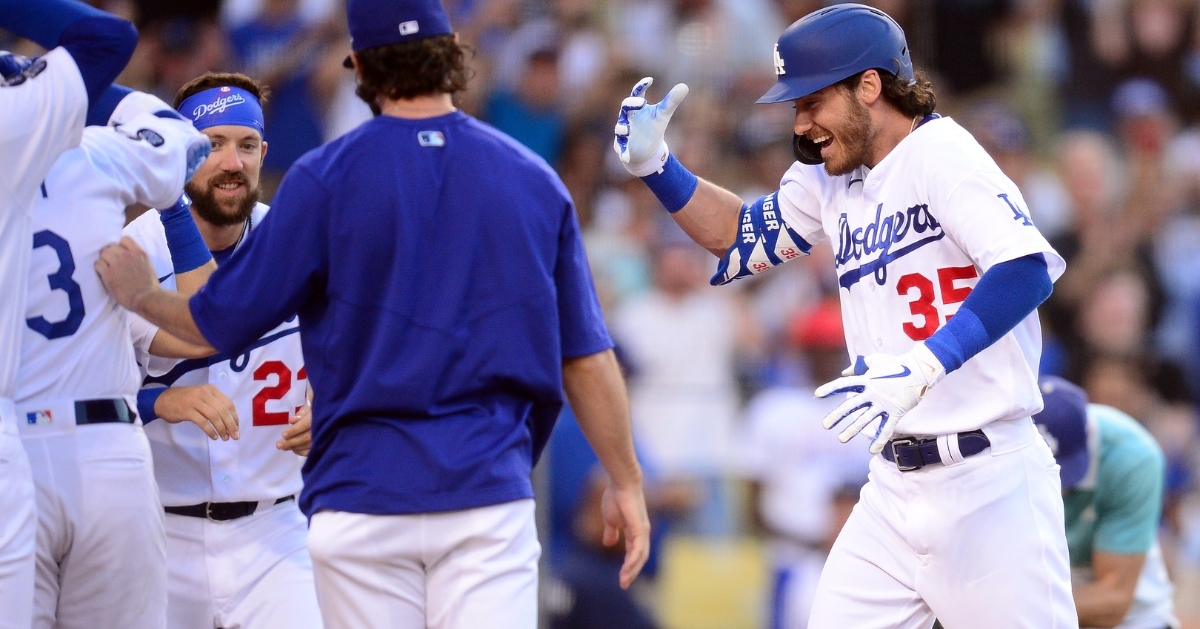 LOS ANGELES — Losing in walkoff fashion at Dodger Stadium, the Chicago Cubs (42-35) dropped their second in a row to the Los Angeles Dodgers (46-31) on Saturday, with Cody Bellinger slugging a game-winning solo home run with two outs in the bottom off the ninth. Jason Heyward led the Cubs at the plate by going 3-for-4, but he had a go-ahead homer taken away from him via a replay review in the top of the seventh. As a result, the game remained tied 2-2, and Bellinger's walkoff bomb provided the Dodgers with a 3-2 victory.

Alec Mills was taken for eight hits in his four innings pitched, but he managed to limit the Dodgers to two runs. Mookie Betts and Max Muncy both doubled in the Dodgers' first two plate appearances of the game, with Betts scoring on Muncy's two-bagger. Kris Bryant laid out in left in an attempt at catching Betts' double, and Jake Marisnick collided with the wall in center while jumping toward Muncy's double. Both valiant catch attempts came up short. Muncy made it to third on a wild pitch and scored when Justin Turner poked a single through the infield. Chris Taylor led off the bottom of the second with a double but was thrown out by Willson Contreras while attempting to steal third. Patrick Wisdom applied the tag on Taylor.

One should NOT try to run on Willson ?? pic.twitter.com/9DvyefnPDn

Julio Urias gave up a leadoff single to Heyward in the third and then walked Sergio Alcantara before recording three straight outs. The Dodgers loaded the bases with two outs in the third but did not score. Rizzo led off the fourth with a 415-foot no-doubter to right. Taylor hit a leadoff single in the home half of the frame and reached third on a base knock Zach McKinstry. Contreras once again outed Taylor on the basepaths, as he teamed up with Wisdom in picking Taylor off at third. McKinstry made it to third on a two-out single by Urias, but Betts then grounded out.

Heyward swatted a leadoff double in the fifth and scored on a double by Ian Happ not long after that. Happ was left stranded, though. Brad Wieck sat the Dodgers down in order in the fifth, and Urias was relieved by Joe Kelly after giving up a one-out single to Javy Baez in the sixth. Joe Kelly replaced Urias on the mound and tallied two consecutive strikeouts to end the half-inning. A.J. Pollock doubled off Daniel Winkler with two outs in the sixth, but McKinstry grounded out thereafter.

Garrett Cleavinger nearly gave up a go-ahead dinger to Heyward at the start of the seventh. Initially ruled a home run, the ball was ruled foul upon further review, as it traveled just outside the left field foul pole. Nevertheless, Heyward went on to single, but Alcantara followed that by grounding into a double play. Rafael Ortega singled and stole second prior to Phil Bickford striking out Contreras. The Dodgers failed to take advantage of a one-out walk drawn by Betts in the seventh, with Winkler preventing them from taking the lead.

Bickford needed just three pitches to retire the Cubs in order in the top of the eighth, and Rex Brothers struck out the side in the bottom of the eighth. The top of the ninth saw Bickford and David Price combine for a 1-2-3 frame. Keegan Thompson registered two quick outs in the bottom of the ninth, but Bellinger then ended the contest with a 422-foot jack that soared out to center field. Bellinger did not enter the game until the top of the seventh, and his walkoff shot a few innings later granted the Dodgers a 3-2 triumph.

WALK IT OFF, BELLI. pic.twitter.com/1G2rHR1nqD