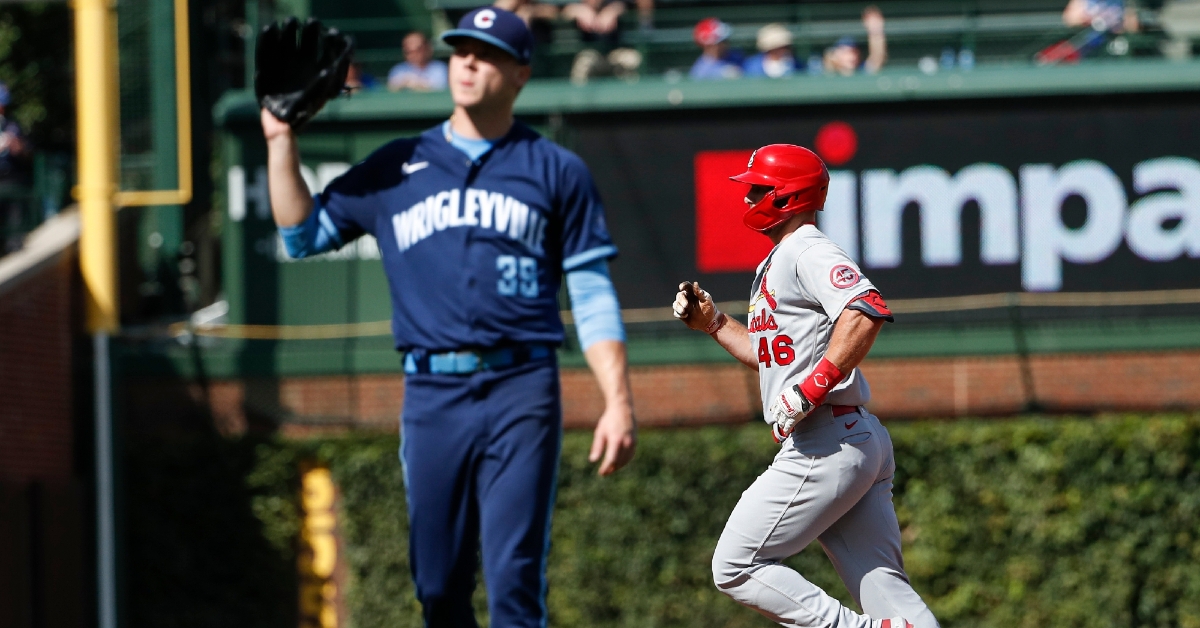 CHICAGO – At this point in the season, a realistic goal for the Cubs should be reaching 70 wins. With 10 games left, including seven with the St. Louis Cardinals, who are the hottest team in baseball, wins may not come easy over the next week in change.

In what will be the final series at Wrigley Field this season, the Chicago Cubs (67-86) welcomed the St. Louis Cardinals (84-69), riding a 12-game winning streak into the weekend set. Unlike several teams who have the normal stars to count on, the Cardinals are getting contributions from the entire roster as you never know who will step up next.

With Justin Steele making his final home start of the season, the Cardinals used a trio of two-run shots to build an 8-0 lead before holding off the Cubs 8-5 for their 13th straight win. As rough as things have been for Steele since moving to the rotation, he pitched very well in the early stages of Friday, going toe to toe with J.A. Happ.

Command has been the biggest issue for Steele most of this season, and through three innings, his command was as crisp as it has been as he accumulated four strikeouts in the first two innings. Another issue for Steele has been keeping the ball inside the yard, and that proved to be an issue once again as the young left-hander allowed three two-runs shots in his five innings, suffering another loss as a starter.

The first of those homers came in the second inning after Steele walked the pitcher. Typically, nothing good comes from walking the pitcher, and that was exactly the case here. With two down and Paul Goldschmidt at the plate, the first basemen fouled off several good pitches before getting one to his liking and crushing it to give the Cardinals a 2-0 lead. That proved to be enough given how Happ pitched through three innings, but in the fourth, the Cubs had him on the ropes with a chance to break through.

With one down in the inning, Patrick Wisdom worked a walk before Matt Duffy singled to right, putting the tying run on first. A four-pitch walk to Nico Hoerner loaded the bases bringing the bottom of the order to the plate. After working a full count and fouling off several pitches, David Bote came up empty on the high heater, followed by the Trayce Thompson strikeout as the Cubs threat ended.

In the fifth inning, Steele began to lose his mojo as Harrison Bader led off the inning with a double before coming home on the Jose Rondon pinch-hit two-run shot, putting the Cardinals up 4-0. Tommy Edman kept the line moving with one of his three hits and came home two batters later, with Tyler O'Neill going deep for the Cardinal's third three-run shot off Steele and building a 6-0 lead.

Now onto to pitch was Jason Adam, who was added to the major league roster as the extra man for the doubleheader. Adam has been a remarkable story to follow this season as he has worked his way back from a fractured ankle and has now made his way back to the bigs. Adam struggled in his return to the bigs pitching in and out of trouble, allowing RBI singles to Edman and Goldschmidt, helping the Cardinals build an 8-0 lead at that point.

Alex Reyes was then called upon for the Cardinals in the bottom of the sixth, and the Cubs finally started showing signs of life at the plate. For whatever reason, Reyes struggles against the Cubs, and that continued Friday as the Cubs began to claw their way back into the game.

Following a pair of strikeouts to Greg Deichmann and Wisdom, Duffy showed great patience reaching first base with a walk. That seemed to open the flood gates as six consecutive Cubs reached base, including Sergio Alcantara, who followed that walk-up with his fourth homer of the season to put the Cubs on the board trailing 8-2.

Bote kept the line moving with a single to left before Thompson worked a walk and the Cubs had something brewing. With Austin Romine representing one of the final players off the bench, the backup catcher came through, crushing an RBI double over the head of Bader to pull the Cubs within 8-4. Willson Contreras made it six consecutive batters to reach a few pitches later as he dropped one just inside the right-field line for an RBI double and the Cubs were within 8-5 as the teams moved to the seventh.

With Adam pitching a scoreless seventh inning to keep the Cubs close, Giovanni Gallegos was called upon to pick up the save in the seventh. Unlike Reyes, who struggled, Gallegos was impressive striking out a pair of hitters to secure the win and handed the Cardinals their 13th straight win.