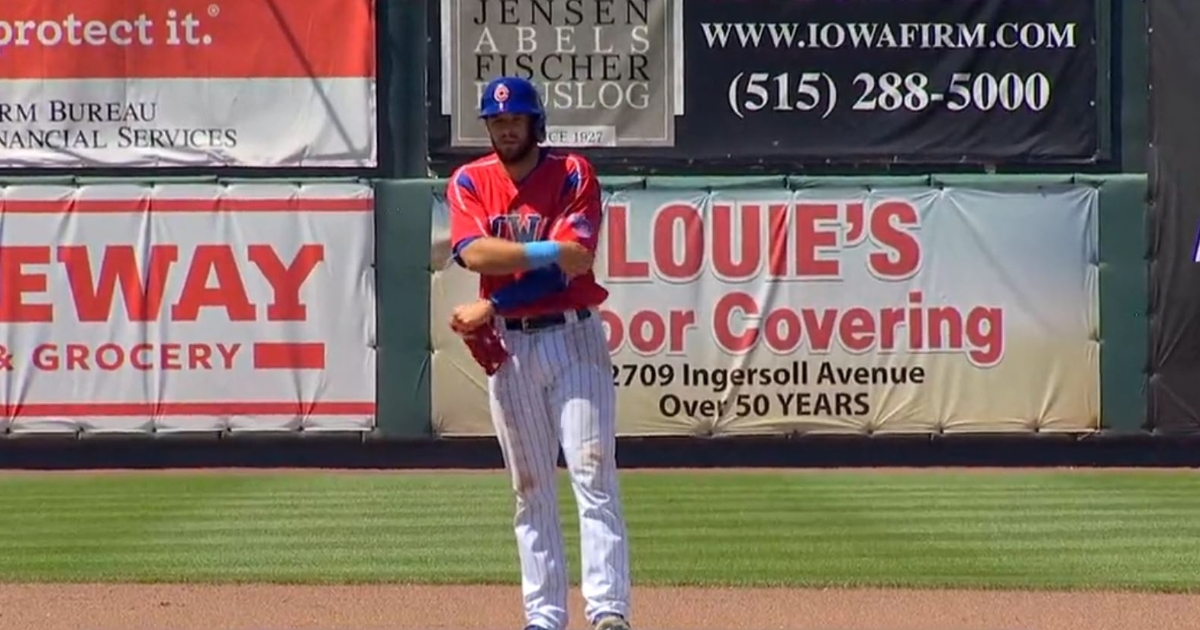 Bote is playing impressively in his rehab stint in Iowa

With the Rookie League teams off on Sunday, things were a bit quieter on the diamond. That meant it was time to focus on the full-season leagues as they deserve a lot of the attention right now, given how the Cubs have played this season.

Most of the results left more to be desired as the organization went 2-2 on the day. However, despite that, all three games were highly competitive and close, which is all you can ask for at the minor league level.

Despite allowing four runs in the third inning, the Iowa Cubs managed to rebound and came back to top Omaha. Cam Sanders was the victim of that rocky inning as the right-hander allowed five runs in four innings.

Apart from him, the Iowa bullpen was impressive as they tossed five scoreless frames and allowed just two hits. Michael Rucker earned the win going 1 2/3 innings of work, with Ben Leeper picking up his third save of the year.

Not only were the Cubs trailing 1-0 in the first, but Omaha busted things open in the third with a four-run frame to take a 5-0 lead. Edward Olivares started that inning with an RBI double before RBI singles from Nate Eaton and Vinnie Pasquentino finished things.

David Bote not only put the Cubs on the board with an RBI groundout in the third, but used an RBI double in the fifth to make things 5-2 as he has been heating up.

David Bote with another RBI double! He is now 4-for-9 with two doubles and five runs batted in through his first three games with us. pic.twitter.com/2mjW5HO5ck

Ground outs from Jared Young and Narcisco Crook followed that double in the fifth as the Cubs were within 5-4.

Iowa continued their comeback bid in the sixth with Carlos Sepulveda grounding into a double play to bring home the tying run. However, Bote played hero by ripping an RBI double in the seventh to bring home the winning run in the Iowas Cubs 6-5 victory.

David Bote with his second RBI double of the afternoon to give us the lead! pic.twitter.com/6MezhsmDTi

Darius Hill raised his average to .421 with a three-hit day, while Bote added two hits with three RBIs.

For the most part, this week was a struggle for Tennessee, but at least all their games were competitive and close. Looking to end the week positively, the Smokies did just that as they used a complete-game effort to win.

It is becoming a mystery as to what the Cubs outlook for 2019 first-rounder Ryan Jensen is. A starter in college, the right-hander, hasn't gone more than five innings this season and tossed three scoreless frames on Sunday. He gave way to Dalton Stambaugh, who gave the Smokies 4 1/3 innings of relief to earn the win.

Not only did Tennessee not need a ton of offense, but they received all they would need in the second. Bryce Ball opened the scoring with an RBI single to end a long RBI-less drought before Cole Roederer picked up the game-winning hit with another RBI single to make things 3-0. Roederer wasn't quite finished as he added a second RBI hit in the sixth to extend the lead to 4-0.

The lone run for Pensacola came in the seventh inning when Jan Mercado singled off Stambaugh. Jake Slaughter capped off the scoring with an RBI single in the ninth to lift the Smokies to the 5-1 win. Roederer had a great day at the plate, picking up three hits and three RBIs from the ninth spot, with Slaughter adding a pair of hits.

You can't fault the Cubs pitching on Sunday as they did their job allowing just three hits. However, when you have 10 hits as an offense and can only score once, you ask for a recipe for disaster. That was the case on Sunday as the River Bandits walked off South Bend.

DJ Herz got the start, and although an abbreviated outing that saw him last just 2 2/3 innings, he continued to pitch well. He allowed just one run as his ERA remains 2.17. The trio of Zac Leigh, Walker Powell, and Eduarniel Nunez followed him, allowing two hits the rest of the way, but Nunez was saddled with the loss.

While South Bend pitching was strong throughout, Quad City was a bit better, with starter Patrick Halligan tossing 5 2/3 scoreless frames and Jack Aldrich adding 2 1/3 scoreless frames. With Juan Carlos Negret putting Quad City up 1-0 in the second, it looked like that run would hold up when you consider the pitching across the board.

That was until the ninth inning when Pablo Aliendo ripped an RBI single to left field and brought home the tying run to make things 1-1. The River Bandits managed to get the last laugh as they capitalized on a wild pitch from Nunez in the ninth to push home the winning run. Alien had a great day providing the Cubs with the lone run and picking up four hits. Owen Caissie added three hits as the Cubs hit the ball, but couldn't score.

Back home for 6 games starting on Tuesday. pic.twitter.com/EcNbWovwzo

Although the Pelicans took the series 4-2, it didn't come easy as the Nationals made them work for it. In the process of a loss yesterday, Charleston won their game and closed the Pelicans lead to just one game in the division.

Tyler Santana made a rare start and, for the most part, pitched well enough to win. The right-hander gave the Pelicans 5 1/3 innings and allowed three runs. He walked one and struck out eight as his ERA remains solid at 2.66.

Santana was given an early lead in the second when Malcom Quintero drove in the game's first run on a sacrifice bunt before Josue Huma added an RBI groundout to make things 2-0. Two of the three runs Santana allowed came in the third inning when Jacob Young and Geraldi Diaz picked up RBI singles to tie things up 2-2.

The Nationals managed to take the lead in the sixth with an RBI groundout, but the Pelicans were not about to go down quietly with Kevin Made tying things up in the eighth with his fourth homer as this game was ticketed for extra innings.

Brand new ballgame. Kevin Made ties it up with one swing of the bat! pic.twitter.com/IkTlVroLGI

In the extra frame, it was the Nationals striking first with a Jeremy De La Rosa RBI grounder before retiring the Pelicans in order to secure the win.

Made and Jacob Wetzel led the offense with two hits as they combined for four of the team's five hits. Felix Stevens added the final hit as the Pelicans are looking to hold off Charleston and cap off a first-half division title.

Final in the series finale.

We’ll head into the final three games of the first half with a one-game lead in the division.#MBPelicans pic.twitter.com/Op06MwHg8b

Looking to move one step closer to an NCAA title, the Notre Dame Fighting Irish ran into a hot Oklahoma team and fell 6-2. Knowing the magnitude of this game, Link Jarrett went through seven pitchers, with all of them tossing three innings or less.

While that may work sometimes, Sunday was not one of those days as Cade Horton was a tough customer for the Sooners. Across his six innings, the right-hander allowed two runs on five hits, but managed to strike out 11 hitters in the win.

With the game tied 0-0 in the third, it was the Sooners cashing in first as Tanner Treadway and Wallace Clark picked up RBI singles to put the Sooners in front 2-0. That lead grew to 5-0 in the fifth, with Clark reaching base on an error that allowed for two more runs to score, followed by a Jackson Nicklaus single that made things 5-0.

Hoping to make things interesting late, David LaManna pulled within 5-2 as he cranked one over the left-field fence. Unfortunately, that would be as close as they would get as Treadway picked up a second RBI hit later in the game to cap off the 6-2 win. With the loss, the Irish are now in an elimination game scenario as they will face Texas A&M on Tuesday.