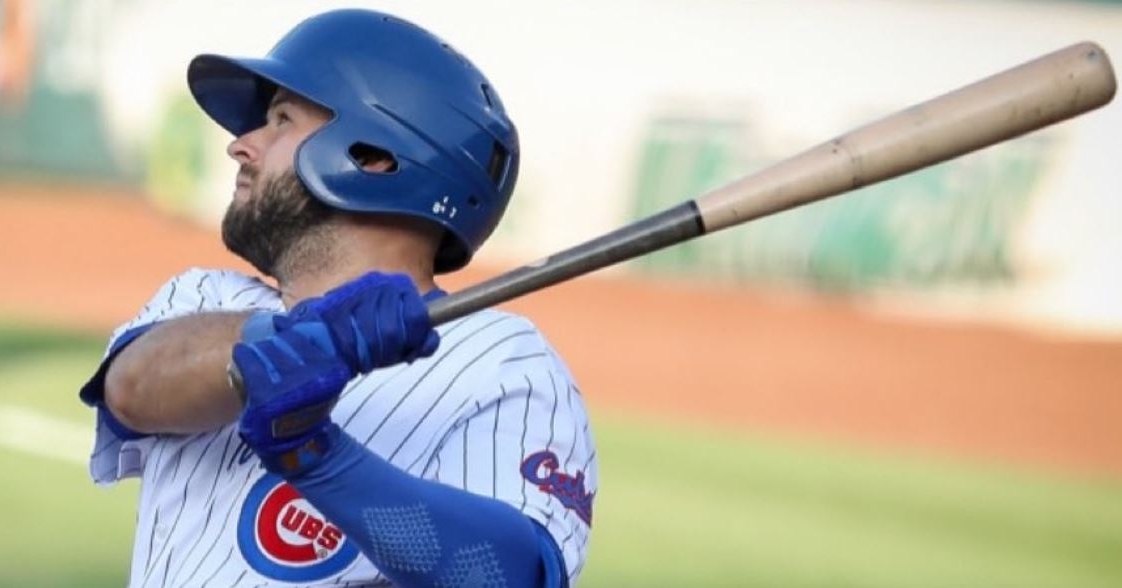 Bote had two hits in the loss (Photo via I-Cubs)

Saturday was not a great night for the Cubs on the diamond as their minor league teams posted a 1-3 mark. The lone win was big as AA Tennessee moved closer to first place while also helping their playoff positioning.

For the first time this week, the Saints found a way to win and did so by doubling up the Cubs 6-3. Adbert Alzolay made his first start earlier this week for the ACL Cubs and then returned to Iowa to do the same. He lasted two innings, allowing one run, but walked two and struck out six.

That was the beginning of what was a bullpen game as the Cubs managed to keep things close for most of the night. The run Alzolay allowed came in the first inning off a balk as that was looking to be enough for Woods Richardson, who struck out eight in just over five innings.

John Hicks has suddenly discovered his home run swing and homered for the third straight night to tie things up 1-1 in the fourth. One inning later saw the Saints take the lead for good as a costly error led to the first run while Mark Contreras homered to make things 4-1. That lead would grow to 5-1 in the sixth on the David Banuelos single, putting Iowa in a tough place.

David Bote managed to pull the Cubs within 5-2 with an RBI groundout, but again, Saint Paul had an answer and extended the lead to 6-2. Matt Mervis capped off the scoring in the eighth with an RBI double, but it wasn't enough in the Cubs 6-3 loss.

With every win the Smokies get, they move closer to the top spot and drop their magic number also. Looking to pull within one game of Rocket City, the Smokies used a four-run inning to bust things open before the pitching took care of the rest.

Ben Brown only lasted four innings, but four very good innings as he allowed six hits while striking out four. Brown left with the lead as Bryce Ball picked up an RBI single in the fourth as that would be all the Smokies would need.

Most of the damage came in the sixth inning, where the Smokies scored four times to extend the lead to 5-0. All those runs came on RBI singles as Jake Slaughter, Nelson Maldonado, and Andy Weber had the hits. Yonathan Perlaza capped off the scoring for Tennessee with an RBI double in the eighth to give the Smokies the 6-0 win.

Despite an excellent pitching performance across the board, the Cubs offense was held in check as they fell to the Whitecaps 3-1. Richar Gallardo was solid across his four innings, allowing two earned runs. He gave way to Riley Martin, who allowed one run in three innings, while Jake Reindl finished the game.

Gallardo found himself in an early hole with Jace Jung connecting for a first-inning homer to make things 1-0. The Cubs managed to tie things in the fourth on the Owen Caissie homer, but that was it for the Cubs offense in what was a long night on the diamond.

West Michigan pushed across the winning run in the fifth on the Jake Holton single before closing out the scoring with another run in the sixth. Caissie had two hits to lead the way, with Pablo Aliendo, Casey Opitz, and Yeison Santana rounding out the hits.

At least we didn't go for an onside kick up 11 in the 3rd quarter. pic.twitter.com/nX4GWnhzZA

When you are struggling, you will find new and painful ways to lose games. For the Pelicans, that painful loss came on Saturday as they took a 2-1 lead into the ninth and lost 10-2. That means that Augusta scored nine runs in one inning, which will not get it done.

2022 seventh-round pick Nick Hull was on the mound and, although limited in terms of experience, gave the Pelicans two shut-out innings as they continue to add more players from the Rookie statures.

It took six innings for someone to break through, and that was Kevin Kilpatrick Jr, who singled to give Augusta the 1-0 lead.

James Triantos tied things up with a single in the seventh before the Ezequiel Pagan sacrifice bunt gave the Pelicans a 2-1 lead heading into the ninth. It was in that inning when things went south as the Pelicans not only gave Augusta the lead, but when you allow nine runs, it becomes too much as the Pelicans lose again 10-2.