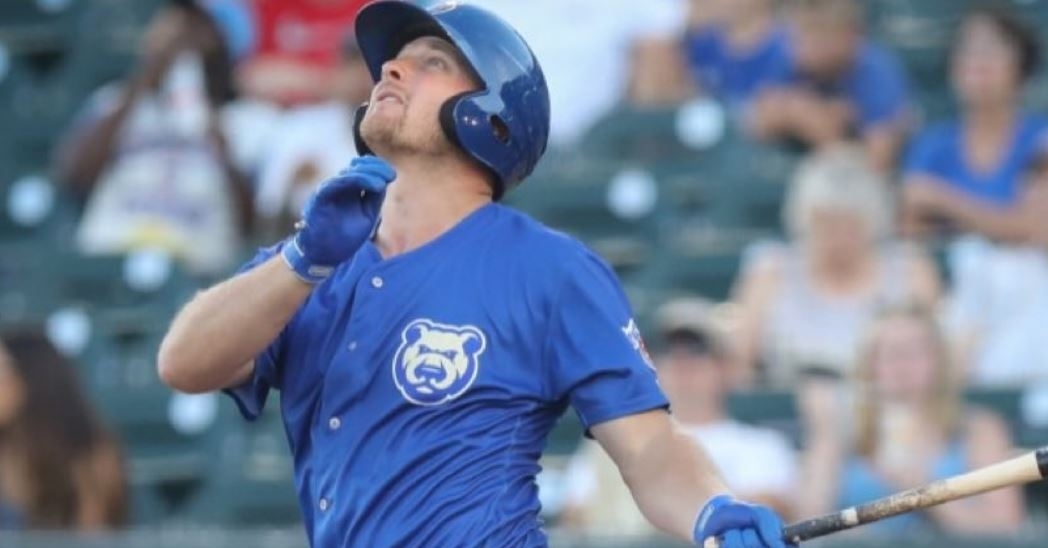 Hicks homered in the loss (Photo via I-Cubs)

Things will look slightly different this week now that the playoffs have begun. Sure, there will be nights like Tuesday when all four teams are in action, but depending on how the playoffs go, that may go down to two teams by the weekend.

With a full slate of games on Tuesday, most of the attention was on High-A or A-Ball as their best of three playoff series began. The Cubs came out with a 1-1 showing in those two games, but went just 1-3 overall as things were not the best on the farm.

Not only has the Cubs hitting been struggling, but so is their pitching as Iowa is in a tough stretch. Anderson Espinoza continues to have horrendous results in AAA as the right-hander saw his ERA rise to 9.18 after allowing three runs in four innings. When you have a guy like Thomas Parsons going seven innings and giving up next to nothing, that poses a problem as the Cubs offense was silenced.

Memphis not only grabbed the lead on the Scott Hurst first-inning homer, but saw the winning run come home in the second off the Kramer Robertson RBI single. Pedro Pages extended that lead to 3-0 in the fifth, only to see John Hicks answer with his 17th of the season to pull Iowa within 3-1.

That would be as close as the Cubs would get as the Redbirds pushed across a pair of runs late to win 5-1. Apart from that homer, Esteban Quiroz had two hits, as those were the only three hits in the game.

Despite clinching a playoff berth last week, the Smokies would still like some momentum going into the postseason, which isn't happening right now. Chris Clarke had been pitching well in his last several appearances, but after allowing five runs in five innings, his ERA is now 4.91.

Clarke had excellent command, but when he made a mistake, the Lookouts made him pay, with Matt McClain and Garrett Wolforth connecting for homers in the second inning to put the Lookouts in front 2-0. Two innings later saw the Lookouts double that lead with Daniel Vellojin connecting for the game-winning RBI triple to make things 4-0.

Looking to battle back late, the Smokies picked up a pair of homers from Cole Roederer and Bryce Ball, but there were only solo shots as the Smokies endured the 6-2 loss. Those homers were the only hits for the Smokies offense as they had an all-around tough day.

Cole Roederer and Bryce Ball both homer but the Lookouts take care of the Smokies in Chattanooga. pic.twitter.com/AJ9xYZaZvS

The last time the South Bend Cubs were in the Midwest League playoffs; they went on a historic ride that saw them go 7-0 to earn the League Championship. Now back in the postseason again, and with ace Luis Devers on the mound, it was the Cubs looking to make it eight straight postseason wins.

Like he has done all season long, Devers was impressive again, allowing just one run in six innings of work. That run came in the first inning off the Pat Winkel homer, but apart from that, Devers did what he does: get batters out. While Devers was excellent, David Festa was even better as he went six innings also, scattering just two hits to go with 10 punchouts.

While the first-inning run didn't seem like it would be enough, it was still the only run scored with the Cubs coming to bat in the bottom of the eighth. That is when South Bend saved their best for last as the RBI single from Pablo Aliendo tied things up. Later in the inning, Fabian Pertuz came through in a big spot as his single gave the Cubs a 2-1 lead.

Looking to secure the series-opening win in the ninth inning was Jake Reindl, and all he did was strike out the side to end things as the Cubs take game one 2-1.

That’ll do @SBCubs , that’ll do pic.twitter.com/y38sWwsYtc

It has been a while since the Pelicans made the postseason, but the last time they did, they won it all. After one of the best first-half showings in Carolina League history, things were a struggle in the second half for the Birds, which has them on the edge of an early playoff exit.

That would be a damper on what was otherwise a great season as the Riverdogs took game one of their best of three seires 6-1. Grant Kipp got the start and has gotten better every time out. Kipp allowed two runs, but his overall performance was top-notch.

The first of those runs allowed came on the Ryan Spikes homer in the second, while Junior Caminero made things 2-0 with a single. Caminero would add a second RBI single in the fifth to put the Riverdogs up 3-0, but it was at that moment when the Pelicans began to battle back.

With one swing in the sixth, the Pelicans were on the board as Kevin Alcantara unloaded for the solo shot. Unfortunately, that would be it for the runs as Caminero added his third RBI single in the seventh as part of a three-run frame that gave the River dogs a 6-1 series-opening win.

Birds fall in game one.

A chance to get back in game two on Thursday in Myrtle.#MBPelicans pic.twitter.com/fBUw0VYUck