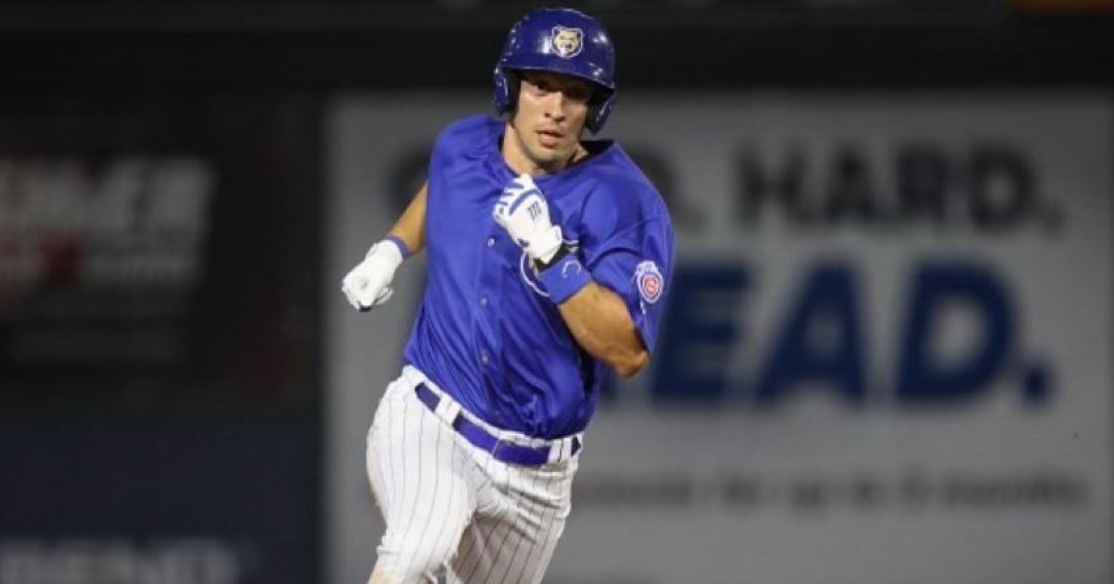 Hill had two triples in Tuesday's contest (Photo via I-Cubs)

Tuesday marks the last full day of Minor League baseball as all four full-season teams took to the field along with the Rookie League squads. Regarding Rookie League, their season ended on Tuesday, and despite none of those teams making the postseason, there is a lot to like in the future, especially regarding the ACL squad. Still, the organization posted a 4-3 mark in their last full day of action, which was a positive sight.

After it was revealed that Caleb Killian would not start game one at Wrigley Field, he toed the rubber in Iowa and delivered one of his best outings of the season. Sure, he lasted just five innings, but with two walks and seven strikeouts, while allowing no runs, you will take it.

Killian was backed with some early offense that all started with the Alfonso Rivas sacrifice fly in the first. Luis Vazquez added an RBI double in the second to extend the lead to 3-0, as that hit proved to be the game-winner. Leading 4-0 in the fifth after the Erick Castillo sacrifice fly, Saint Paul finally got on the board in the sixth with Chris Williams taking Danis Correa deep to make things 4-1.

That was the lone run for the Saints in the game as Iowa responded with three runs in the bottom of that inning as an error led to the first run, with Darius Hill capping off the scoring with a two-run triple. Hill continues to mash, picking up two more hits to bring his average to .343. Matt Mervis added two hits, with Alexander Canario picking up his first AAA hit.

Started the series off right! pic.twitter.com/Rmwf0Nu3tY

At this point, the Smokies need to worry less about catching Rocket City and focus more on staying in front of Birmingham. It's hard to do that when DJ Herz continues to struggle on the mound as he allowed four more runs in 3 1/3. Considering his struggles with Tennessee, a trip back to South Bend may be a good idea to clear his head and get that swagger back.

Despite Yonathan Perlaza giving the Smokies a 1-0 lead in the first, Rocket City was patient enough to make Herz work and eventually started to do damage off the lefty. They tied things up in the third on a bases-loaded hit by pitch before scoring three times in the fourth to take a 4-1 lead. Kevin Maitan started the scoring with a solo shot, while Logan O'Hoppe had the two-run double.

Hoping to stay close, Chase Strumpf connected for his 19th homer to keep the Smokies within 4-3.

Chase Strumpf blasts a 2-run homerun to put the Smokies within 1! Smokies trail 4-3 in the bottom of the 4th. @CStrumpf pic.twitter.com/p19UdhfxwV

With Peyton Remy now on the mound, things were not much better in the fifth, with Rocket City scoring four more times to take an 8-3 lead. Fortunately for Tennessee, their offense was more than up for the challenge as they answered that four-run frame with one of their own, with Perlaza picking up an RBI force out ahead of the three-run homer by Nelson Maldonado.

That would be as close as the Smokies would get as Rocket City continued to crush the ball and scored eight unanswered runs to tend the game with the 16-7 win. Zach Davis had three hits from the leadoff spot, with Maldonado adding two. Davis is hitting .412 in AA with Maldonado at .411.

In what could be another big series for the Cubs playoff push, the Cubs battled through a pitchers duel to come out on top in extras. Luke Little made his second start, and although it was a short three-inning outing, he allowed just one run. Take that away, and the Cubs bullpen was outstanding as Joe Nahas, Riley Martin, and Sheldon Reed combined for seven shutout innings with five strikeouts.

The lone run off of Little came in the third, giving the Whitecaps a 1-0 lead. Jace Jung was responsible for that RBI, using an RBI single to take the lead. All the Cubs would need on offense was two runs, with both coming from Pete Crow-Armstrong. Not only did he tie things up with an RBI single in the fifth, but he came through in the 10th with a second RBI single to give the Cubs a massive 2-1 win.

Armstrong had three hits with his two RBIs and continues to play outstanding. Jordan Nwogu, Pablo Aliendo, and Kevin Made were a few of the players to record hits, as was Brennen Davis, who picked up one hit in his first game back with South Bend since 2019.

At this point, the Pelicans need a huge rest as they can't buy a win. Despite a tie game in the ninth inning, the Pelicans let it slip away, with Augusta pushing across three runs for the win. That has been a trend throughout the second half, and the Pelicans are fading because of it.

One of the positives was Didier Vargas, who delivered another strong performance. The left-hander was carving up the Greenjackets all game, allowing one run in five innings with five strikeouts. What helped him settle in was the three-run third by the Pelicans as Parker Chavers gave them a 1 -0 lead with a groundout ahead of the Moises Ballesteros two-run single.

Moises Ballesteros had the green light last night and checked in with RBI No. 3 and 4.

Birds back in action today at 7:05 PM. pic.twitter.com/sqjCWRV7Fw

Little did they know that 3-0 lead would be all the runs they would get, but it looked to be enough at the time. The lone run charged to Vargas came in the sixth when David McCabe tallied an RBI single to pull within 3-1. One inning later, things were tied as the Keshawn Ogans sacrifice fly, and the Ignacio Alvarez single brought things to 3-3.

With the score still tied in the ninth, Augusta had one last offensive outburst, with Drake Baldwin providing the game-winning run off a bases-loaded walk while McCabe capped off the three-run ninth with a two-run single. Huma had a nice day at the plate, picking up three hits. He was joined by Kevin Alcantara, Ballesteros, Jacob Wetzel, and Liam Spence, who had multi-hit games.

Birds fall in the series opener.

The one Rookie League team that had a little bit of success was the ACL squad, as they finished their season 25-29. That was capped off with a nice 6-1 win on Tuesday as they got into their groove during the season's final two weeks.

The Cubs went through a plethora of arms in this one, with Chris Kachmar seeing more action and 2022 seventh-round pick Nick Hull grabbing the win after tossing a scoreless frame with one punchout. Despite the lopsided score, all the runs came in the sixth inning for both sides, with the Cubs putting up the big number.

An RBI fielder's choice from Reggie Preciado opened the scoring before the bases-loaded walk by Rafael Morel proved to be the game-winning RBI. With the bases still loaded and Ismael Mena at the plate, the Athletics uncorked a costly error that allowed three runners to score to bust the game open 5-0. Anderson Suriel added an RBI single later in the inning to make things 6-0.

The lone run for the Athletics came in the bottom of that frame off the Christopher Cruz single, but that was it in the Cubs 6-1 win. Suriel was joined by Michael Hermosillo, Dillan Granadillo and Brayan Altuve for the lone hits.

This game summed up how the season has gone for the DSL clubs, as their 23-37 record would indicate that. After an outstanding pitching performance and seeing the game go into extra innings, the Cubs took the lead only to have the Marlins walk them off in the end.

Gabriel Agrazal capped off his strong summer by pitching in relief and gave the Cubs three scoreless frames of four-hit ball. He walked zero and struck out three to finish the summer with a 2.30 ERA. The Cubs found themselves down a pair early with a wild pitch leading to the game's first run in the first and an RBI single from Anthony Peguero in the third to make things 2-0.

From that moment on, it was time for the Cubs to play catchup, and they waited until the end to tie things up. Sandy Sanchez brought the Cubs to within 2-1 in the sixth with an RBI groundout, while Jose Herrera tied things up in the seventh with his sixth homer and helped to send the game into extras.

Still tied in the 10th, Jerry Torres came through with a massive RBI as his RBI groundout put the Cubs in front for the first time, 3-2. However, the Marlins had the last laugh with Peguero coming through with a walk-off homer to lift the Marlins to the 5-3 win. The Cubs had six hits, with Luis Maza responsible for two and Albert Belliard, Herrera, Torres, and Jairo Diaz grabbing the rest.

Despite posting the worst record among Rookie League teams at 22-38, the Cubs ended their season in style by pounding the Angels 14-4. They did so with a pair of six-run innings, and both came late in the game.

Trailing 1-0 in the first, the Cubs tied things up on a wild pitch before the Yodel Diaz RBI single gave the Cubs a 2-1 lead. The Angels would tie things up in the fourth off a wild pitch before taking the 4-2 lead in the sixth off of RBI singles from Luis Torres and Ramon Ramirez. It was in the bottom of the sixth when the Cubs took the lead for good using their first of two big innings.

An Adan Sanchez single with the bases loaded mixed with an error not only allowed two runs to score, but all four runners came home to put the Cubs in front for good 6-4. Carlos Altuve would add another RBI single later in the inning, with Lizardo Ruiz picking up an RBI double to make things 8-4.

Two innings later, the Cubs offense was at it again, with Ruiz connecting for a second RBI single to extend the lead to 10-4. Darlyn De Leon picked up a bases-loaded walk to push across the next run, while Joan Delgado added an RBI double to make things 13-4. The final run came home via a wild pitch as the Cubs ended their season in style.

Diaz led the offense with three hits and an RBI, with Ruiz and Sanchez picking up two hits and two RBIs. In total, the Cubs offense had 12 hits as this was one of their best offensive showings of the year.