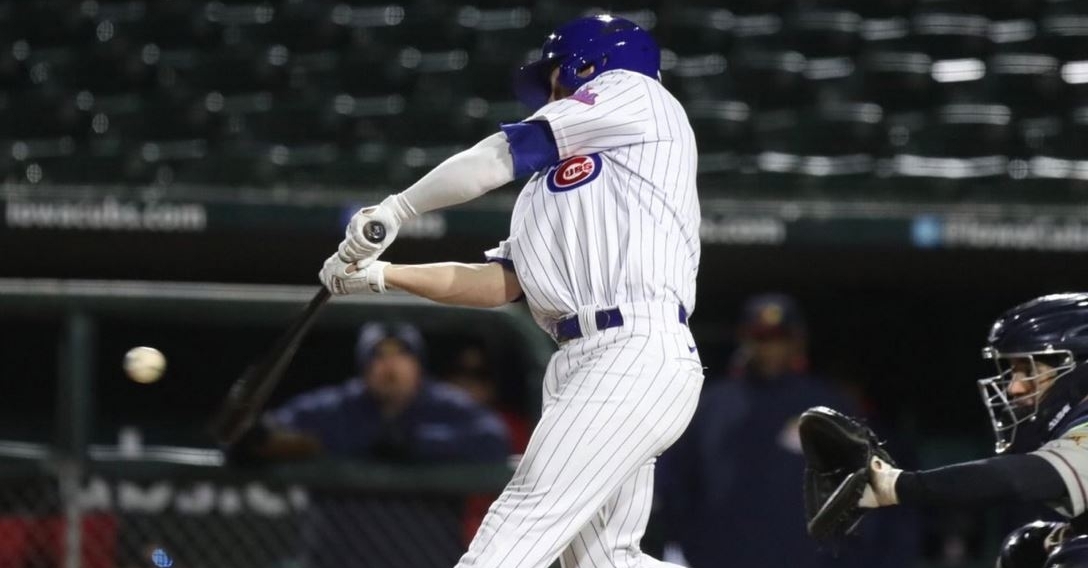 Giambrone had the game-winning sac fly (Photo via Iowa)

The best part about baseball, compared to other sports, is that it has a minor league program. That means on top of the Major League team; you have four more teams to watch which could translate to four wins.

With the Cubs laying an egg on Wednesday and not looking good, fans at least had the minor leagues to look forward to as their games were all at night. From a results side of things, the Cubs organization went 1-2 with Iowa as the lone winner. That said, fans still love what they see from these kids as the future looks very bright in Chicago.

Iowa secured the lone win in the Cubs organization last night, but they also did it in front of the home crowd in dramatic fashion. After trailing all game and 2-0 in the ninth, Iowa used a three-run ninth inning to take the lead and walk off the Mud Hens for another win.

Adrian Sampson made his second start of the season and was miles better than his first outing. Sure, Sampson still needs to build up arm strength to get deeper into games, but he gave Iowa four innings of one-hit ball, allowing just an unearned run. Sampson only struck out one as he pitched to contact.

Opposing him was Chase Anderson, who the Cubs should be very familiar with, given his time with Milwaukee. Anderson matched Sampson in terms of allowing one hit in four innings, but he struck out five and, most importantly, didn't allow a run before turning it over to the pens.

The lone run Sampson would allow came in the fourth inning when Ryan Kreidler picked up a sacrifice fly to give Toledo the 1-0 lead. That score would hold for the next five innings as Stephen Gonsalves, and Erich Uelmen were impressive out of the pen and managed to do their job to give the offense a chance.

Now in the ninth and still in front 1-0, the Cubs called on Cayne Ueckert with hopes of keeping things where they were. Ueckert wasn't as sharp as the others allowing a solo homer to Jack Lopez, but that was it as the Cubs went to the bottom of the ninth down 2-0.

Looking to end the game on a high note, Jared Young led off the ninth inning with a single before John Hicks reached with a fielder's choice to bring the winning run to the plate. That batter was Brennen Davis, who ripped an RBI double to make things 2-1 before the Greg Deichmann single tied things up. Now with the bases loaded and one out, it was time for Trent Giambrone to play hero as his sacrifice fly brought home the winning run with the Cubs walking off Toledo 3-2.

That's a WALK-OFF WINNER for your Iowa Cubs! pic.twitter.com/pDmuOPzibt

The Smokies have looked very good to start the season, but this was not one of those games. Making his first start of the season was Anderson Espinoza, who was roughed up in 2 2/3 innings of work. Not only did he allow four hits, but he allowed three runs to score despite punching out three. He gave way to Brandon Leibrandt, Scott Kobos, and Graham Lawson, who all gave up runs in relief despite recording 14 total strikeouts.

Despite the Smokies grabbing a 1-0 lead in the second courtesy of the Chase Strumpf single, Tennessee was playing catchup most of the game as their pitching did them no favors. Grant Witherspoon tied things up in the bottom of the second with a solo shot before the Biscuits took the lead for good in the third off RBI doubles by Greg Jones and Curtis Mead.

The following two innings saw a 3-1 lead grow to 5-1 as Evan Edwards delivered the game-winning solo homer in the fourth ahead of the Mead homer in the fifth to pad the lead. Not about to go down without fighting, the Smokies showed great patience in the sixth as a pair of walks mixed with a hit by a pitch and a single brought home a run, with Bryce Ball recording the bases-loaded walk. Unfortunately, a double play by Strumpf to end the inning killed what could have been a massive frame.

The long ball continued to be a problem all game for the Smokies as they allowed two more solo shots to Austin Shenton in the seventh and Hill Alexander in the eighth to give the Biscuits five homers on the day. Although all solo shots, when you only score three runs, it doesn't matter as Ball picked up a second RBI in the eight off a single with the Smokies falling 7-3.

GAME UPDATE: With tonight’s game postponed, we’ll be set to play 2 tomorrow in a doubleheader against the @TinCaps.

First pitch in game 1 is set for 6:05 PM. #LetsPlayTwo pic.twitter.com/6JzgEaSQ5l

Pitching has been the theme in this series in Myrtle Beach, as a grand total of four runs have been scored. Coming off a 2-1 win in 12 innings on Tuesday, the Pelicans bats were again held in check, falling to Augusta 1-0.

You have to feel for Luis Devers, who made his first start of the season and pitched well. Devers was charged with that lone run allowed on five hits in his three-plus innings of work, but managed to give the Pelicans a good outing. While Devers had a great first start, it was the Riley Martin show, as he has been nothing short of impressive thus far.

Martin not only gave the Pelicans 4 2/3 innings out of the pen, but they were near perfect, allowing no hits and just one walk. Martin also struck out eight and now has 10 strikeouts in six innings this season. For Augusta, the pitching duo of Tyler Owens and Estarlin Rodriguez did the most damage.

Owens started giving Augusta five innings of one-hit ball to go with five strikeouts, while Rodriguez went three innings out of the pen with the same results, just three punchouts, not five. They turned things over to Juan Mateo in the ninth, who pitched a scoreless frame to record the save.

The game's lone run came in the second inning when Geraldo Quintero cashed in with an RBI single for the 1-0 lead. Little did anyone know that it would be the only run needed as the Pelicans managed just two hits and three total base runners in the loss. Those hits belonged to Felix Stevens and Liam Spence while Miguel Fabrizio took a walk.