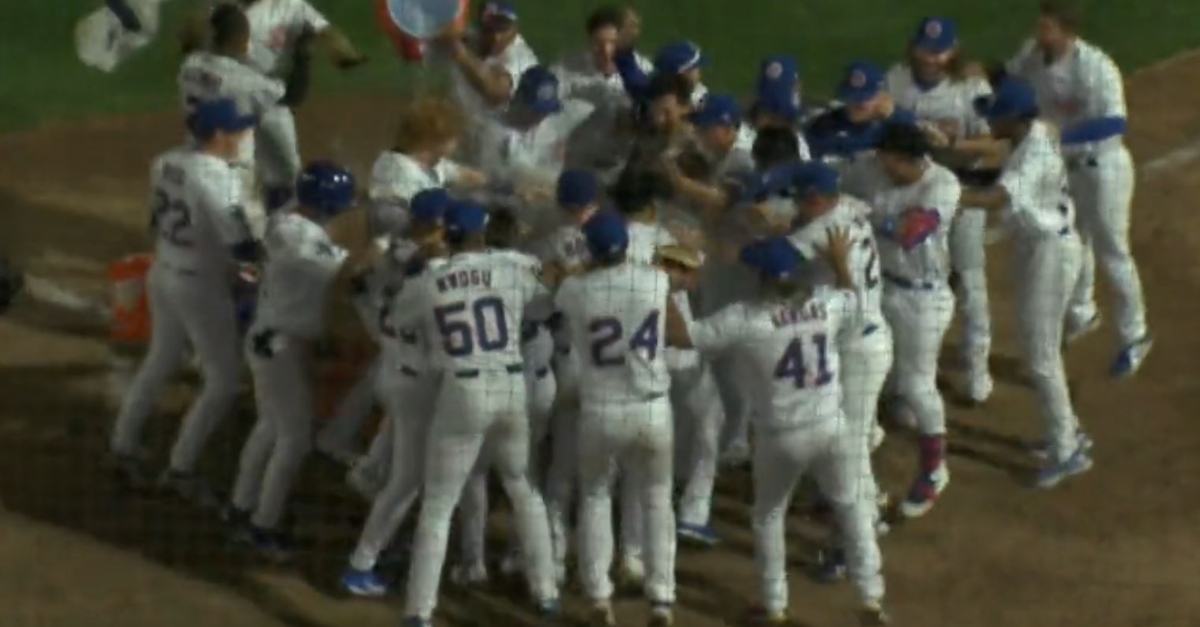 The I-Cubs celebrate after the walk-off homer

The Cubs minor league system was in full swing on Thursday night and treated the fans to four incredible games. Granted, only two of those games resulted in wins, but it is always better to see four competitive and fun games than blowout games.

Three games into this series, and the Cubs pitching has stood out. Once again, Iowa received a strong pitching performance to keep things close, which set the stage for Matt (Mash) Mervis to deliver the walk-off homer in the bottom of the ninth to give the Cubs the win.

I know most Cubs fans wanted to see Hayden Wesneski at Wrigley Field this week, but you have to understand why the Cubs are keeping him down for a little bit longer. Since his first start, which was a clunker, Wesneski has been getting better each time, including a five-inning one-run outing today. He allowed two hits and struck out seven.

No. 10 prospect Hayden Wesneski was cruising for the @IowaCubs tonight.

Once he departed, the trio of Jonathan Holder, Bryan Hudson, and Ben Leeper did their job and tossed four scoreless frames to give the offense a chance to walk things off. The lone run Wesneski allowed came very early, with David Banuelos putting the Saints in front 1-0 with an RBI single in the second. That would be the game's lone run for the Saints, and it was up to the Iowa offense to do what they needed to do.

Iowa needed seven innings to break through on the scoreboard, with Luis Vazquez tying things up with a sacrifice fly. The game remained tied in the bottom of the ninth when Mervis unloaded a 440-foot walk-off homer to propel Iowa to the 2-1 win.

MASH MERVIS FOR THE WIN! pic.twitter.com/TuIPtKnCy0

Along with that homer, Iowa had four more hits, with Alfonso Rivas and Michael Hermosillo grabbing a pair.

The Smokies picked the worst time to go into a slump as they continue to fall further behind the Trash Pandas. However, with Rocket City winning the first half and Mississippi taking care of Birmingham, the Smokies continue to hold that second-half playoff spot with a three-game lead.

One of the biggest issues the Smokies have had recently has been a lack of pitching, and Ryan Jensen was hoping to change that. The right-hander was better, but he still went just 3 2/3 and allowed two runs as a lack of command shortened his outing. Both runs came in the first three innings, with Logan O'Hoppe putting Rocket City on top 1-0 with an RBI single in the first and Livan Soto adding one in the third.

Mixed between those singles was an RBI single from Jake Washer as he tied things up 1-1 in the second.

An RBI single from Jake Washer ties the game!! 1-1 in the bottom of the 2nd. @J_Wash10 pic.twitter.com/ht1MbjWR3K

Looking to add to the lead, Soto came through with a massive RBI double off Samuel Reyes in the seventh to extend the lead to 3-1, which proved to be the winning hit. Tennessee mounted a mini rally in the ninth, using a passed ball to pull within 3-2 before falling by that score.

Led by Jordan Nwogu and his 4-4 three-homer night, the South Bend Cubs sent another message as they continue to hold down the top spot in the division. Along with an impressive offensive showing, Luis Devers continued to do his thing on the mound.

Since arriving in South Bend, Devers has been near lights out, and after going five innings and allowing one run, his ERA is 0.86 for the season. Devers walked one and struck out six as he has emerged as the South Bend ace. It was the Nwogu show early on as the 2020 third pick homered to begin the game in the first and then added a second one in the third to make things 3-0.

That was only the beginning for the Cubs offense, who scored 10 times in the first five innings to take a 10-0 lead. Four runs came in the fourth, with Luis Verdugo and Kevin Made collecting two-run singles. Add in the two-run shot from Pete Crow-Armstrong in the fifth and another Nwogu homer, and the Cubs were up 10-0 as Devers was able to relax the rest of the way.

The lone run off Devers came in the bottom of the fifth as the Disney Chacon sacrifice fly ended the shutout bid. Leading 10-2 in the seventh, South Bend got back on the offensive side with Pablo Aliendo adding an RBI double ahead of the BJ Murray Jr groundout, while Verdugo added an RBI single in the eighth to close out the game 13-3.

Nwogu had a night to remember at the plate, going a perfect 4-4 with a walk and scoring five runs. Three of those hits were homers as he also drove in four.

And it only took 5 innings for the @Cubs prospect to leave the yard thrice for the @SBCubs ?? pic.twitter.com/p8rsbcUGbx

Armstrong grabbed three hits from the leadoff spot with Verdugo, Aliendo, and Made, adding multi-hit games.

It is nice to see the Pelicans scoring runs again, but when you allow five runs in one inning, it is hard to win. That was the case for the Pelicans on Thursday as they wasted an excellent offensive showing with another close defeat.

Buddy Bailey is now short on pitching options and, therefore, is forced to use Koen Moreno on the mound. The 2020 fifth-round pick has an ERA north of 15 and allowed six runs in less than three innings while also walking five. Two of those runs came in the second to put Augusta in front 2-0 before the massive five-run third did them in. Before that inning, you had Jacob Wetzel tying things up in the bottom of the second with an RBI double.

In that third inning, the Greenjackets took the lead for good, using a five-run frame to make things 7-2. A bases-loaded walk and an RBI groundout led to the first two runs before the Kadon Morton three-run shot made things 7-2. Despite the large deficit, Myrtle Beach kept things close early, with Kevin Alcantara picking up an RBI groundout in the fourth, followed by the Juan Mora single to make things 7-5.

Whenever the Pelicans scored, Augusta had answers pushing across a pair of runs in the fifth off the Ignacio Alvarez double and EJ Exposito single to extend that lead to 9-5. Myrtle Beach continued to battle back the next two innings, with James Triantos adding an RBI in the fifth ahead of the Liam Spence bases-loaded walk to make things 9-7 in the sixth.

That would be as close as the Pelicans, with each team picking up another run over the final two innings to give Augusta the 10-8 win. 18-year-old Moises Ballesteros reached base five times, going a perfect 3-3 at the plate with two walks. Josue Huma and Mora added multi-hit games, with Ezequiel Pagan as the lone player without a hit.