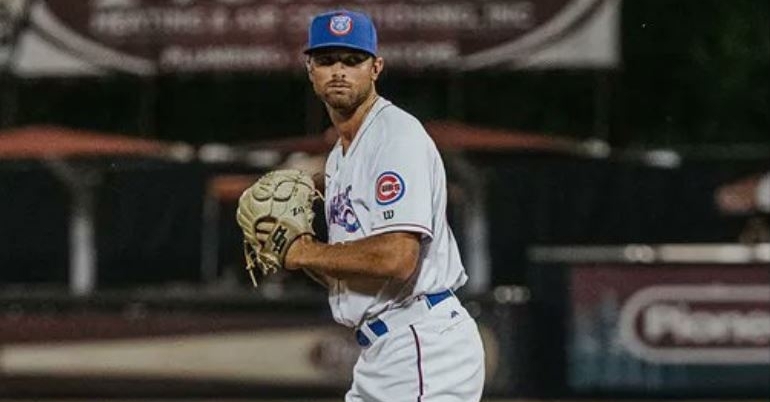 Thompson was impressive in his start (Photo via Smokies)

For the second time this week, the Cubs saw a full slate of minor league games shortened due to inclement weather. Still, all four teams at least took the field, with three of those four games going final. While the result was a 1-2 night, Chicago still has three teams, but likely heading into postseason play, which is huge for this organization.

IOWA CUBS at JACKSONVILLE JUMBO SHRIMP (suspended in the first)

The lone game that didn't go final was in AAA, where the Cubs and Jumbo Shrimp were suspended until tomorrow. Darius Hill had the lone hit up to this point as things will continue Friday evening.

Tonight’s game in Jacksonville has been suspended due to inclement weather. First pitch of game one tomorrow night (nine innings) will be at 4:05 CT and game two (seven innings) will follow. https://t.co/1hg87gICqD

The playoff celebration will have to be put on hold as the Smokies fell to the Blue Wahoos on Thursday. What makes this loss extra painful was that all 11 of the Pensacola runs came in the seventh inning as the Smokies pen had a horrible night.

Riley Thompson continues to improve with every start and picked a great time to deliver his best outing of the season. Not only did he get through five innings, but five scoreless innings with five strikeouts to set the tone. Not only did he do his part, but a plethora of offensive support greeted him as the Smokies pushed across six runs in the first five innings.

The first of those runs came in the third when Jake Slaughter connected for an RBI double. One inning later saw Chase Strumpf unload for the three-run shot to open things up 4-0. Add in the Miguel Amaya RBI double in the fifth, and Tennessee was up 6-0 as it was time for Peyton Remy and the pen to go to work.

In a matter of one inning, Pensacola made things a game as a five-run seventh anchored by the Norel Gonzalez grand slam made things 6-5. Another five-run inning followed that up in the eighth to put the Blue Wahoos in front 10-6, with things coming unglued quickly. Paul McIntosh had a two-run homer in that inning while adding an RBI walk in the 11-6 win.

Zach Davis collected three hits from the leadoff spot to raise his average to .365. Andy Weber and Amaya added multi-hit games in what was a painful loss.

"We didn't lose the game; we just ran out of time." - Vince Lombardi pic.twitter.com/yXShQNEygG

With these two teams set to meet in the playoffs next week, you would like the Cubs to bring a little momentum with them. With that said, they could just be going through the motions, as they dropped their third straight to the Kernels and fourth straight overall 2-1.

Porter Hodge continues to have a breakout stretch in South Bend as the right-hander took the hard-luck loss. Hodge lasted five innings and allowed two runs, but he walked one and struck out six to bring his ERA to 2.01. With Jordan Nwogu connecting for an RBI double in the fourth to give Hodge the lead, it was in the fifth when both of the Cedar Rapids runs would score as Jefferson Morales connected for the two-run shot in what was the game-winning hit.

The Cubs had just three hits in the game, with BJ Murray Jr and Owen Caissie picking up the other two hits.

That's a fly out next Tuesday in South Bend. pic.twitter.com/dtwPRlsK6Y

It took a little while for the Pelicans to find their mojo again, but they have found it against Carolina. With the playoffs around the corner, Myrtle Beach has desperately needed a confidence boost and has looked great in this series.

Grant Kipp continues to get better each time as he gave Myrtle Beach 4 2/3 innings of two-run ball with four strikeouts before handing things over to the pen. It took the Pelicans offense a little while to get going, but Moises Ballesteros backed Kipp with a two-run shot in the third that made things 2-0.

Ethan Hearn would deliver the game-winning sacrifice fly later in that inning, but there was way more to come from the Birds and their offense.

No. 10 for Ethan Hearn! pic.twitter.com/Nk1iHqEjaz

Both of the runs Kipp allowed came in the fourth when Jace Avina put Carolina on the board with a sacrifice fly before Robert Moore made things 3-2 with a homer. That was it for the Mudcats as the Pelicans took care of the rest, with the offense coming away with massive hits throughout the night.

Hearn added to his game with a homer in the sixth, while Felix Stevens picked up a sacrifice fly to make things 5-2. A James Triantos two-run shot and Parker Chavers double later in the game capped off the scoring for Myrtle Beach as they took care of business 8-2.

The ball will find you. @parkerchavers was ready. ??

For your consideration, @SportsCenter #SCTop10 pic.twitter.com/R54idMJ302