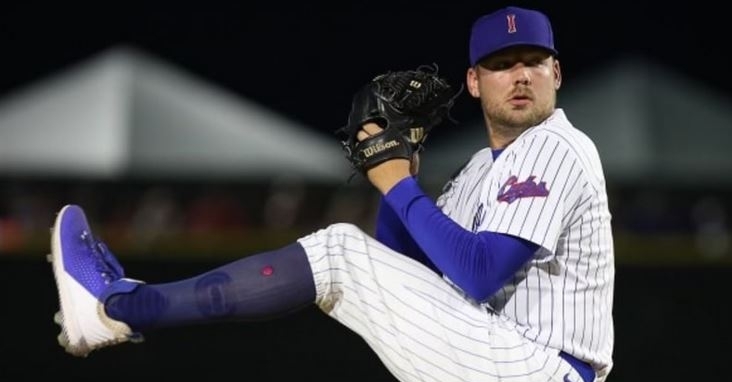 The Cubs continue to go about their business in the farm system posting a 2-2 record for the second night in a row. To no one's surprise, the teams that are hovering around .500 are the ones who came away with the win, while the ones struggling to find wins are the ones that failed to get the job done.

After putting an end to a long losing streak on Friday, the Cubs returned to the diamond Saturday, hoping to make it two straight. Despite taking an early lead, Adrian Sampson was hit hard, allowing six runs in five innings, with five of those runs coming in the second inning.

After a Taylor Gushue first-inning single gave the Cubs an early 1-0 lead, Columbus made sure the Cubs lead wouldn't last long as they scored the remaining seven runs of the game, with five coming in the second inning. A Trenton Brooks single tied things up 1-1 before the Connor Marabell homer gave Columbus a 4-1 lead. A few batters later saw Ernie Clement double, extending the lead to 5-1.

Gabriel Arias connected for his fourth homer and inning later as the Cubs trailed 6-1 after three. The Clippers benefitted from another Brooks RBI later in the game as that proved to be more than enough in a 7-1 win. There wasn't a ton to get excited about with four hits as Gushue, Ian Miller, Jacob Olson, and Trayce Thompson recorded the hits. Dakota Mekkes and Kyle Ryan continued their strong seasons in relief as they combined to throw three scoreless frames.

Couldn't get it done tonight, but we'll be back tomorrow for the series finale! First pitch at 1:08. pic.twitter.com/OajeHTocr9

Not only are the Iowa Cubs struggling, but the Smokies are also as they dropped their contest to the Trash Pandas by the same score. It marks the ninth consecutive loss for the Smokies as they continue to search for answers against Rocket City.

Erich Uelmen got the start and, despite pitching his heart out for five innings, is still searching for his first win of the season. Uelmen allowed three runs in his outing to go with no walks and six strikeouts. Although the Smokies picked up just one run, it came in the second inning as they were able to score first off, another Darius Hill RBI single for the 1-0 lead.

That score would hold until the top of the fifth when Mitch Nay left the park for the fourth time this season, making things 1-1. Unfortunately, that was the beginning of the end for the Smokies as Rocket City plated seven runs over the final five innings, including four in the sixth to surge in front 5-1. That was more than enough for them to pick up the win as Ray-Patrick Didder and Gavin Cecchini added RBIs later in the game to cruise to the 7-1 victory.

Even with eight hits, the Smokies could only push across one run, but it was Hill and Nelson Maldonado collecting two hits each in the loss. Chase Strumpf, Tyler Payne, Brennan Davis, and Carlos Sepulveda added the final four hits for Tennessee, with Christopher Morel going hitless despite taking two walks. Miguel Amaya continues to be out of the lineup for the Smokies.

All you can do is try your hardest. Now, it's time to prepare for tomorrow's 2:00pm start for game 6. #SmokiesBaseball #GoSmokies pic.twitter.com/5plPZ3CkDE

While the higher-level teams struggled to get much going, the lower-level teams continue to be competitive, with South Bend getting back to .500 with their win. Derek Casey got the ball and delivered one of the longest outings of the season for South Bend. In his 6 1/3 innings of work, Casey allowed just two runs on six hits to go with three walks and six strikeouts. His ERA may be 4.04 for the season, but he has gotten better with each start.

Much like a majority of this series, the Timber Rattlers cracked the scoreboard first, using a Chad McClanahan homer in the third to go up 1-0 before he added a fourth-inning RBI single making things 2-0 in favor of Wisconsin. South Bend was able to pull a bit closer in the fourth off a Yonathan Perlaza single, but it was in the fifth inning when the Cubs stormed in front.

Down by a run, Delvin Zinn returned to the lineup and ripped an RBI single to tie things up 2-2. He would then come around to score on a Tyler Durna double, and just like that, South Bend was on top 3-2. Add in another Perlaza single followed by a Jake Washer RBI knock, and the Cubs capped off a four-run frame and led 5-2, heading to the sixth.

The bullpen duo of Samuel Reyes and Eury Ramos took care of the rest of things from there, keeping Wisconsin off the board in the final 2 2/3 innings to preserve the win. Perlaza was one of three players with two hits in the game, joining Bradlee Beesley and Nelson Velazquez in that category. Zinn, Durna, Washer, and Jake Slaughter had the remaining hits for South Bend in the win, who continues to wait for Cole Roederer to return.

After briefly falling below .500, the Pelicans wasted no time reaching that mark yet again, dominating Augusta 8-1. Richard Gallardo continued to put together a great season going five innings and allowing just one run on one hit with four strikeouts. He set the tone, and the offense did the rest.

Richard was the man tonight.

With his first win of the season, he’s tonight’s Waccamaw Dermatology player of the game! #MBPelicans pic.twitter.com/VfMg9wxVWN

Luis Verdugo not only hit his first homer on Friday but one day later went deep for the second time putting Myrtle Beach on top 2-0 in the second. Augusta was able to climb within a run in the bottom of the second using a Javier Valdes single to do that. That was the lone run Gallardo allowed as the offense backed him with plenty of support.

After Flemin Bautista picked up a sacrifice fly in the third, Ethan Hearn connected for a rare RBI hit as his double made things 4-1 in the fourth. Add in a Matt Mervis seventh inning two-run shot, and the Pelicans were in complete control 6-1. The Pelicans were able to bring home two more runs in the ninth using a passed ball and wild pitch to do that before Carlos Ocampo closed the door in the ninth.

Not only was Gallardo great, but Danis Correra, Jeremiah Estrada, and Ocampo were lights out, allowing just four hits to go with 12 punchouts. They also didn't walk a hitter, so that makes their line that much more impressive. The Pelicans collected eight hits as a team, with Yohendrick Pinango the lone player with more than one. Six other players had one hit in the game, including Hearn, Jonathan Sierra, and Jacob Wetzel.

And that’s how it’s done!

Pelicans win their second straight, will try and finish the series with a win tomorrow afternoon. #MBPelicans pic.twitter.com/T72hZHhDSg

In game one of the best of three Super Regionals, the Fighting Irish were looking for a big win in their quest to taking that next step toward the NCAA tournament. Despite scoring in each of the first five innings, the best defensive team in the nation had a rare rough night in the field, committing four errors which eventually led to the 9-8 defeat.

A first-inning homer by Carter Putz gave the Irish a quick 1-0 lead only to see the Bulldogs answer with a Tanner Allen homer in the bottom of the first making things 1-1. Brooks Coetzee put the Irish back in front with a solo shot of his own in the second as things looked to be a shootout early. Jack Brannigan singled home another run in the top of the third to increase the lead to 3-1, but a Kameron James single followed by an error allowed the Bulldogs to tie things up yet again 3-3.

The Notre Dame offense continued to click in the top of the fourth, with Spencer Myers putting them back in front with yet another RBI single. That set the stage for Zack Prajzner in the top of the fifth as his three-run shot busted the game wide open, with Notre Dame now leading 7-3. Giving how good the Irish have been this season, this was a lead that many thought was safe. On this day, however, the Bulldogs were not going to go away quietly and did what they needed to do to come back.

In a carbon copy of their third inning, James pushed the Bulldogs next run across with a single before another error closed the gap to 7-5. With the bases loaded, Tanner Kohlhepp got Logan Tanner to ground into a double play killing the rally and keeping the Irish in front 7-6. One inning later saw the Bulldogs take their first lead when Rowley Jordan powered on out to center field just over the center-field fence for the 8-7 lead.

Not about to give up, the Irish came storming back when Prajzner connected for a clutch RBI double, tying things right back up 8-8. The very next at-bat for the Bulldogs saw Logan Tanner get in on the home run fun as his solo shot to right put State back in front 9-8. That proved to be too much for the Irish as the Bulldogs deployed their secret weapon Landon Sims in the eight to close out the game earning a two-inning save. The Irish need to win Sunday to extend the series, or they will be heading home for the season.