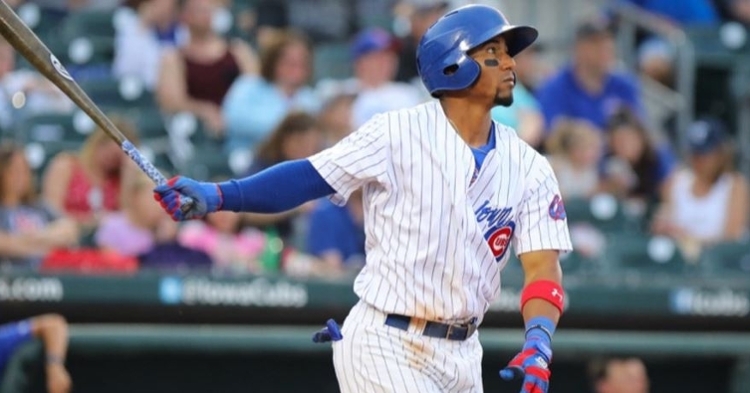 Garcia had two doubles on Tuesday (Photo via Iowa)

Baseball is officially back, at least on a minor league side of things. While the Cubs are wrapping up spring training on Tuesday, the first part of the minor league schedule got underway as AAA opened its season up on Tuesday.

There is a lot of anticipation and excitement for the Iowa Cubs as two of the team's top four prospects are in Iowa in, Brennen Davis and Caleb Killian. While Killian has yet to take the mound, Davis did get the start as the Cubs minor league season is officially underway.

Along with Killian and Davis, Iowa has many other notable players, including Tuesday starter Cory Abbott. Once a top 15 prospect in his own right, Abbott made his major league debut last season and will again look to build off that to make it back to the show.

Expecting most starting pitcher outings to be shortened in the early going, Abbott was a bit shaky during his first start, allowing a pair of runs on three hits in 2 2/3 innings of work. Both those runs came in the first inning when Josh Palacios connected for a two-run homer to give Buffalo a lead they would never give up.

While Abbott was a bit shaky in his outing, Nick Allgeyer was anything, but shaky as he was brilliant in his first start of the season. He got through six innings of work, but he did so, allowing minimal baserunners allowing just one Trent Giambrone single and a Jared Young walk as the only baserunners.

That didn't bode well for a Cubs offense that struggled to get anything going, especially after falling behind 3-0 in the fourth with Locke St. John allowing an LJ Talley RBI double. Although still down 3-0 entering the seventh, the Cubs offense refused to go down quietly as they finally broke through in the seventh.

With former Iowa starter Joe Biagini on the mound, P.J. Higgins got things started as his leadoff walk put a runner on base. A few pitches later, it was Robel Garcia ripping a double to right field as he looks to rediscover his 2019 magic with this team.

NOt only did Garcia plate Higgins with that double, but he advanced to third on the throw setting the Cubs offense up for more. One batter later saw Jared Young make things 3-2 as his RBI groundout brought home Garcia.

Abbott and St. John may not have been on their best start the season, but Matt Swarmer was near lights out coming on to pitch the fifth. Not only did he give the Cubs four impressive innings or work, but he did so by allowing just one hit to go with two walks and three strikeouts.

Most importantly, Swarmer kept the Bisons off the board, which helped the Iowa offense get back into the game. Needing a run in the final two innings to at the worst force extras, the Cubs had a one-out walk from Giambrone in the eighth before having another shot in the ninth.

With one down in the night, Garcia came up big yet again, picking up his second double of the game to put the tying run in scoring position. That would be as close as Iowa would get as Greg Deichmann, and Davis struck out to end the game as Buffalo takes the season and series opener 3-2.