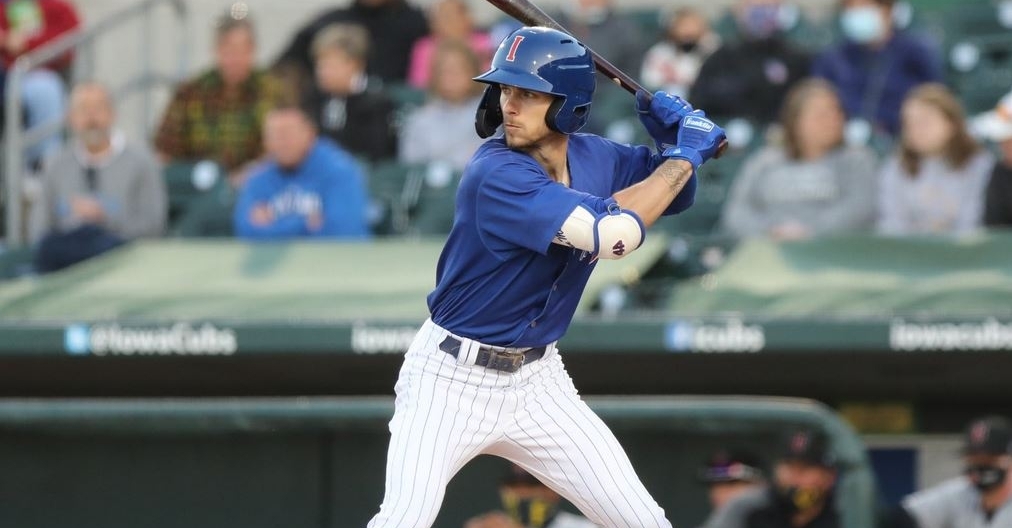 What a difference a week makes. After showing a lot of improvement over the weekend, wins have been hard to come by this week as the Cubs are 3-8 across the farm so far this week. Things were a bit better last night with the Cubs system going 2-2, but .500 ball is not where you want to be.

There will be many changes coming through the minor league system in the coming days as fans will find out what draft picks signed and which ones didn't, as well as where those picks will be assigned. There was also some important news out of AAA as 10 games will extend the AAA season as part of a postseason play-in type of deal. It will be interesting to see if the rest of the minor league follows suit.

The series with the Mud Hens has gotten off to a rough start as Toledo doubled up the Cubs 8-4 to take a 2-0 series lead. Corey Abbott made his first start since returning to Iowa and was roughed up in the process. Not only did he last just 2 2/3 innings of work, but Abbott was charged with six earned runs while walking five hitters. Those are not the starts you want to see from a top 15 prospect, especially one seen as a possible starter next season.

The Cubs were able to keep things close in the early going, with Yariel Gonzalez providing the lone run with a sacrifice fly. Gonzalez added to that in the third inning as his three-run shot busted the game open in the third and gave the Mud Hens a 4-0 lead. That was just the beginning of a five-run inning as Grayson Greiner provided the game-winning hit with a double that saw Toledo take a 6-0 lead.

Hoping to climb back into the game, Ian Miller got the Cubs on the board in the fourth with an RBI groundout, but the Mud Hens had an answer with Gonzalez adding his fifth RBI of the night with a single to push the lead to 7-1. An RBI groundout by Trayce Thompson in the fifth pulled the Cubs within 7-2 before making things 7-3 in the seventh. Aderlin Rodriguez picked up the final run for Toledo with a seventh-inning single, as Trent Giambrone capped off the scoring with a sacrifice fly in the eighth.

Miller quietly continues to put together a strong season, picking up three hits and an RBI to push his average to 275. Abiatal Avelino and Andrew Romine joined him with multi-hit efforts, while Michael Hermosillo, Alfonso Rivas, Tony Wolters, and Taylor Gushue added the remaining hits. Dillon Maples delivered another scoreless relief outing as the Cubs need to make a decision on him soon. Iowa will be getting a boost later this week as both Matt Duffy and David Bote begin their rehab assignments.

Although the Smokies took another loss on Wednesday, it was a much more competitive showing as they gave the Braves a great effort. Javier Assad's streak of solid starts came to an end, as he was charged with four runs in just 3 2/3 innings. Fortunately for him, only two runs were earned as his ERA remains under four at 3.98 for the season.

At this point in the season, the Smokies would trade anything to stop playing from behind. After a Shea Langeliers double in the first, the Smokies were again down by a pair before even stepping into the batter's box. Unlike some of their previous games, the Smokies offense was able to pull even much quicker than normal, using a Jared Young double in the third to tie things up 2-2. Things didn't stay tied for long, as Trey Harris put the Braves back on top for good with a double in the fourth before a bases-loaded walk pushed home the game-winning run.

The Braves continued to build on their 4-2 lead as Jalen Miller homered for the fourth time this season, pushing the lead to 5-2. If it weren't for Young, the Smokies offense would have done nothing, as his second homer of the season in the eighth brought things to 5-3. That would be as close as the Smokies would get as the Braves picked up another win.

Young was the offense as he not only had two hits but was responsible for all three RBIs. Christopher Morel, Brennen Davis, recently promoted Levi Jordan, Edwin Figuera, and Tyler Payne picked up the remaining hits for the Tennessee offense.

It was Low-level Minor-league success once again as both wins came from A-League teams. After playing catchup most of the game, the Cubs got the last laugh, scoring once in the ninth to tie things up before walking off the Kernels 8-7. Joe Nahas got his first start in a while and gave the Cubs 4 1/3 innings of ok work. He was charged with three earned runs, but he pitched well enough to provide the offense with a chance.

Down 1-0 after the Alex Isola first-inning homer, South Bend went to work in the second using RBI singles from Ryan Reynolds and Jake Washer to take a 2-1 lead. That lead was short-lived as Gabriel Maciel tied things up with a homer in the third before a balk gave the Kernels a 3-2 lead in the fifth. In the sixth, the Cubs bats came to life as they put a crooked number on the board.

With Nelson Velazquez slumping, his sacrifice fly played a pivotal role in the big inning, tying the game up 3-3. That set the stage for Grayson Byrd, who singled home the go-ahead run before the Yonathan Perlaza sacrifice fly, made things 5-3 in favor of South Bend. With a wild pitch helping the Kernels get one of those runs back, Tyler Durna put the Cubs back up a pair using an RBI double to extend the lead to 6-4.

It was in the eighth when the Cubs began to unravel again as Eury Ramos delivered another wild pitch to help Cedar Rapids pull within 6-5. Add in the Isola double later in that inning, and the Cubs found themselves down 7-6 with just six outs to go. The Cubs made sure to use those six outs to their advantage, with Durna picking up a game-tying sacrifice fly in the ninth to send the game to extras.

With the newest South Bend pitcher Dalton Stambaugh taking care of business in both the ninth and 10th innings, the South Bend offense came to bat with a chance to finish things off. Reynolds needed just two pitches to do that as his single capped off the comeback and gave the Cubs an 8-7 walk-off win.

Even though Reynolds was not credited with an RBI on that final hit, he did collect three hits in the game with an earlier RBI. Durna and Byrd not only combined for three RBIs, but they also had four hits between the two of them to pace the offense. Velazquez suffered another hitless day but managed to pick up two walks.

Typically, duces are wild in a game of cards. For the Pelicans, it was threes wild on Wednesday as they scored three runs in three straight innings to pick up the 10-3 win. Manuel Espinoza got back to his winning ways, as he improved to 4-5 on the season with a good start. Espinosa lasted six innings and was charged with all three runs. He did, however, walk one and strike out four.

One of those three runs allowed came on the Juan Carlos Negret homer that had the Fireflies up 1-0 in the second. The bottom of the second is when the Pelicans offense took off as they scored not only three times in the bottom of that inning but nine times over the next three innings.

Fabian Pertuz got that started with an RBI single before Ed Howard exited stage left for the second time this season for the 3-1 Pelicans lead.

Don't let this man get hot!

Ed Howard got the offense started with his second homer of the season.

Crack of the Bat Play of the Game | @VinesPlumbingSC pic.twitter.com/tgfm4LYtx7

An Ethan Hearn double in the bottom of the second added to the lead before Matt Warkentin connected for a two-run single, pushing the lead to 6-1. Myrtle Beach was not done as they pushed home three runs again in the fourth courtesy of the Jacob Wetzel single and Matt Mervis homer to lead 9-1 after four.

Columbia did their best to climb back into the game, using a Gage Hughes homer in the top of the fifth to pull within 9-3. The Fireflies were unable to get anything else done after that as an error later in the game brought home the final run, with the Pelicans winning 10-3. Since moving to the leadoff spot, Howard has taken off as he picked up three hits yet again to go with his homer.

Mervis joined him with three hits while Pertuz, Wetzel, and Hearn all had multi-hit efforts in the win. Kevin Made and Jordan Nwogu added hits while Yohendrick Pinango was out of the lineup.