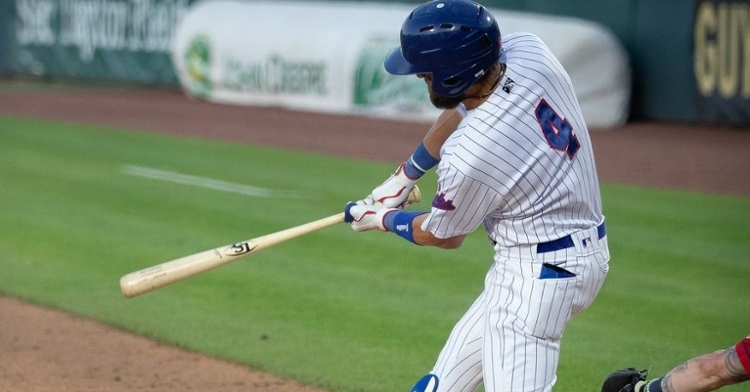 Things got a little better on Saturday, as the Cubs system managed to play to a 2-2 mark despite five games taking place. Some might wonder how you had four games when a total of five games were being played? The answer is simple, two teams played each other as the DSL Red took on the DSL Blue for a second time this season, and that doesn't count against the overall record on the farm.

The wins on Saturday came from the upper tier of minor league teams as Iowa and Tennessee did their thing. The good news, however, despite several losses across the past two nights, all four non-Rookie League teams have a chance to win or split their series this week which is always a positive sign.

After playing to a 5-5 tie in regulation, the Cubs used the extra-inning rule to their advantage and took home an impressive 9-5 win. Adrian Sampson got the start, and despite lasting just 4 2/3 innings, he did pitch well enough to earn a win allowing three runs. He turned things over to the bullpen of Jake Jewell, Kyle Ryan, Manuel Rodriguez, and Ben Leeper. For the most part, they were strong outside the two runs allowed by Ryan. Rodriguez and Leeper continue to impress as Rodriguez has yet to allow an earned run in AAA while Leeper has lowered his ERA to 1.52.

Iowa got on the board first using the long ball to take a 1-0 lead in the second. After clearing waivers, Taylor Gushue returned to Iowa and made his presence felt immediately by connecting for his 7th homer of the season. Iowa extended their lead to 2-0 in the third when Frank Schwindel picked up a sacrifice fly as his great start with Iowa continues.

Over the next two innings, the Cubs saw their lead evaporate in the blink of an eye as Gabriel Arias put Columbus on the board in the fourth with an RBI double before Owen Miller gave them a 3-2 lead in the fifth off a two-run double of his own. Doubles continued to be the theme for Columbus, with Jordan Luplow picking up one in the seventh to push the lead to 4-2 before coming home on a Wilson Ramos single to make things 5-2.

After being held in check for the better part of five innings, the Cubs bats came back to life in the eighth, with tipped-options="ajax: { data: { type: 'Player', sport: 'baseball', playerId: '353' } }">Alfonso Rivas ripping a double to make things 5-3. A few batters later, Nick Martini went deep for his sixth homer of the season and brought things back to even 5-5. That score would up the rest of the game as the two sides headed to extras to decide a winner.

In the 10th, the Cubs wasted no time with Schwindel picking up his first double of the season to give the Cubs a 6-5 lead. Martini followed that up with a two-run double of his own before coming home to score on an Ian Miller single, and just like that, Iowa had a 9-5 lead. They would win by that score as Leeper closed the door in the bottom of the 10th.

Martini may have had just two hits, but he made them count, driving in four runs with his hits. Schwindel added a pair of hits to go with a couple of RBIs, while Andrew Romine also got in on the multi-hit fun. Sergio Alcantara also stayed hot since returning to Iowa, picking up another hit.

It took Tennessee eight innings to get rolling, but better late than never. After holding a 1-0 lead most of the game, the Smokies pushed seven runs across the game's final three innings to pull away from Rocket City 8-3. Dakota Chalmers earned his first win of the season, giving the Smokies five shutout innings of one-hit five strikeout ball. He set the tone for Brenden Little and Ethan Roberts, who, although gave up three runs in relief, were able to preserve the win for him.

Early offense hasn't been a thing for Tennessee this entire series, but that changed on Saturday with Brennen Davis going deep for his ninth homer in the third to give the Smokies a 1-0 lead. Little did Tennessee know at that point, his homer would provide them with the lead for good as that score held up until the seventh.

In that inning, the Smokies began to make the Trash Pandas pitchers work, with Chase Strumpf taking a bases-loaded walk to double their lead 2-0. Carlos Sepulveda answered that with one of his biggest hits of the seasons as his bases-clearing RBI double provided the game-winning runs and gave the Smokies a 5-0 lead.

Brandon Davis put an end to the Smokies shutout bid with a solo homer in the eighth, but once the ninth inning rolled around, Tennessee was at it again. Cam Balego got things started with a two-run triple as he pushed the lead to 7-1. Balego would later come home on a Tim Susnara single, giving Tennessee an 8-1 lead before winning 8-3.

Not only did Balego and Sepulveda lead the offense with two hits each, but they combined for five RBIs and played an intricate part in the team's success. Susanna added a multi-hit game of his own while Davis, Jared Young, Nelson Maldonado, and Edwin Figuera all had hits.

In what was another rough start by Max Bain, the Cubs were doubled up by Wisconsin, falling 8-4 on Saturday. Bain may have gotten into the sixth, but once again was charged with five earned runs as his rough season continued.

After both teams were held scoreless through four, South Bend was able to strike first using a Tyler Durna single to give them a 1-0 lead before a wild pitch put them in front 2-0. Wisconsin wasted no time responding in the bottom of the fourth as the Nick Kahle homer put them on the board before taking a 3-2 lead off the Thomas Dillard single.

One inning later saw the Rattlers bust the game open as four more runs crossed home plate, putting them up 7-2. The first of those runs came on the Carlos Rodriguez RBI knock ahead of the two-run David Hamilton triple. Hamilton came around to score on a wild pitch, and just like that, South Bend was searching for answers.

In the seventh, a Je'Von Ward homer gave Wisconsin eight unanswered runs up until Yonathan Perlaza ended that with a two-run shot in the ninth. However, his homer wouldn't be enough to pick up the win as Wisconsin took game five 8-4.

Not only did Perlaza add two hits from the ninth spot to go with his two RBIs, but Delvin Zinn added two from the lead-off spot. D.J. Artis, Durna, Harrison Wenson, and Nelson Velazquez all had hits in the loss, with Bryce Ball suffering an 0-4 day. Ball is struggling since coming to the Cubs, hitting a .083 thus far with zero home runs.

What looked like another victory in hand turned sour quick as the Riverdogs scored seven runs in the final two innings off the Pelicans pen and rode that to a 9-4 win. DavidJohn Herz gave Myrtle Beach another short, but effective start going 4 1/3 innings and allowing just one run in the process.

That run came in the top of the fourth when Garrett Hiott cashed in an RBI single to give Charleston the lead. Fortunately for Herz, the offense picked him up in the bottom of the fourth as Matt Mervis and Jordan Nwogu earned bases-loaded walks to put Myrtle Beach in front 2-1. Following Hiott's inside the park homer in the sixth that not only tied the game, but had the crowd in a frenzy, the Pelicans responded as Kevin Made came through with an RBI knock that put the Pelicans up 4-2.

It was in the eighth when things began to go south, starting with Brett Wisley's game-tying single. One inning later saw the Riverdogs put the game away as they pushed across five runs in the ninth to not only take a 9-4 lead, but win by that score. The Pelicans had just four hits in the game, with Made leading the way with two RBIs. Nwogu, Jacob Wetzel, and Yohendrick Pinango rounded out the hits, with Ed Howard going 0-2 with two walks.

The only game that Cubs fans could be happy with in terms of a loss was in the DSL Rookie league where the DSL Cubs Red knocked off DSL Cubs Blue 3-2. Not only was there not much offense, but most of the runs came in the game's first two innings. DSL Blue grabbed the early lead in the first inning when Kenya Perez uncorked a wild pitch to score Raul Guzman.

Red was able to tie things up in the bottom of the first as David Olivo struggled with his command all start long. He walked six batters in 1 2/3 innings, including a bases-loaded walk to Moises Ballesteros to tie the game 1-1 in the first. One inning later saw Red Capitalize on Olivo's control issues yet again, with Pedro Ramirez giving them the lead for good with a bases-loaded walk before a double play had them up 3-1.

Little did they know, that third run would be all they would need as the Frank Hernandez singled in the fifth would be the final run scored in what was a 3-2 DSL Red win. Joanfran Rojas and Frank Hernandez led DSL Blue as they combined for four of the teams five hits to go with the Hernandez RBI. Daniel

Ferreira had the fifth and final hit for DSL Blue, while Cristian Hernandez suffered a hitless day to go with two walks.

Despite winning the game, Red only collected two hits but used six walks to do most of their damage. Their hits came from Ramirez from the leadoff spot as he is now hitting a .364, and Early Tatis, who brought his average back to .300.