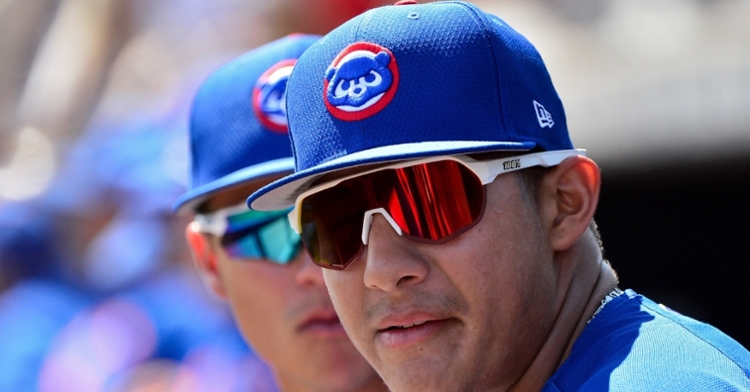 Last night was not a good night for the Cubs farmhands as they struggled to get much going. One day after going 3-1, the Cubs saw their minor league system go 0-3 on the evening, with Myrtle Beach getting postponed.

Across all three games, the Cubs saw their pitching struggle to get outs, and their hitting held in check for the most part. Yes, some players continued to put together a great season, but that will be the challenge of this minor league season. With last year canceled, it will take a long time for some of these players to get in a groove.

One day after pounding the Saints 11-1, it was time for Saint Paul to return the favor holding the Cubs bats in check. Making his second start of the season was Ben Holmes, who was roughed up in just 4 2/3 innings. Holmes only allowed four hits but walked four batters and was charged with five earned runs. That was more than enough for the Saints offense as the Cubs bats only mustered one run on six hits of Saints pitching.

The Cubs run came in the fourth inning as they trailed 2-0 on a pair of Saint Paul homes. Coming off his four-RBI night on Tuesday, Taylor Gushue was at it again, driving in the Cubs lone RBI to make things 2-1.

Your ?@EMCInsurance? Player of the Game is Taylor Gushue! pic.twitter.com/UeJNKa7VcY

The Saints put the game away in the bottom of the fifth when Jimmy Kerrigan connected for the team's third solo home run of the game, which was part of a three-run inning. Add in a Rob Refsynder RBI groundout in the sixth, and you have a 6-1 Saints win.

While Holmes may have struggled, Kyle Ryan certainly didn't as he returned to Iowa to toss a scoreless inning of relief with one strikeout. Abiatal Avelino continued his hot start to the season, picking up a pair of hits as he was the lone Cub to record multiple hits. Rafael Ortega, Gushue, Andrew Romine, and P.J. Higgins recorded the final four hits for the Cubs.

The three-game winning streak ended, but we can start another one tomorrow night! pic.twitter.com/CM4Lb5ftiY

Tennessee has gotten off to a strong start this season as they are currently 4-3. They had a great chance to improve to 5-2 last night only to see Rocket City rally with a three-run eighth inning off Bryan Hudson and Wyatt Short to pick up the 6-4 comeback win.

Matt Swarmer continues to pitch well in the early going of 2021 as he held the Trash Pandas to two runs on four hits in 4 1/3 innings of work. He then handed things off to the bullpen, which didn't go well. The Trash Pandas struck first with a first-inning run, but it was all Smokies shortly after that. Grayson Byrd clubbed an RBI double in the top of the second to get them on the board and tied things up 1-1.

One inning later, Levi Jordan continued his hot series going deep for the second time in as many nights to give the Smokies a 3-1 lead. Things were looking up at this point, but that is when the momentum shifted in Rocket City's favor. Following the David Mackinnon single to make things 3-2, Swarmer was pulled in favor of the bullpen.

That was the opening the Trash Pandas needed as they tied things up on a Michael Cruz sacrifice fly. The next inning saw Jordan stay hot with an RBI single, putting the Smokies in front. That 4-3 score held up until the bottom of the eighth when Matt Jones doubled off Hudson to tie the game yielding the pitching duties to Short. Michael Stefanic then delivered the game-winning two-run shot to give the Trash Pandas a 6-4 lead before finishing off Tennessee in the ninth.

While most of the talk will surround Christopher Morel and Miguel Amaya, Jordan was the table-setter last night, picking up a pair of hits, pair of RBI's, and reaching base three times in the loss. Amaya also reached base three times with a couple of walks to go with his hit and is now hitting .333 on the season. Morel had a night to forget at the plate going 0-5 with four punchouts as he will look to bounce back on Thursday.

The defending Midwest League champions are struggling out of the gates and stumbled last night in Beloit 8-3. The loss moves them to 2-5 on the season as some of their starts are off to slow starts. Matt Kachmar would love to forget his start last night, allowing six runs on seven hits in less than five innings of work. He put his team in an early hole that was too big to climb out of.

Even with his struggles on the mound, it wasn't all bad for South Bend, at least not early on when they were able to strike first. D.J. Artis picked up his first RBI of the season, ripping an RBI double to left for the 1-0 Cubs lead. Fresh off his hitting streak coming to an end, Delvin Zinn doubled the Cubs lead as his sacrifice fly put South Bend on top 2-0. Little did the Cubs know that this would be the bulk of their offense, and Beloit would score eight unanswered runs at one point.

The first of those runs came in the bottom third when a Thomas Jones single-ended the Cubs shutout bid. Two innings later saw the Snappers offense erupt as they pushed across seven runs to take a 2-1 deficit and turn it into an 8-2 lead. Ricky Aracena and Jones picked up RBI singles, but the Nic Ready grand slam was the backbreaker.

Following that offensive output, the Cubs pen was able to keep their offense quiet, especially Eury Ramos, who threw a pair of shutout innings to go with four strikeouts. South Bend added a run in the ninth on a Bryce Windham double, but it wasn't near enough in an 8-3 defeat.

Cole Roederer ended a recent cold stretch by picking up a hit and adding a walk to his line, with Zinn getting a walk to go with his sacrifice fly. Artis, Yonathan Perlaza, Jacob Olson, and Reivaj Garcia added the rest of the hits for the Cubs.

South Bend drops another game at Pohlman field tonight vs the @BeloitSnappers. pic.twitter.com/vl36horwhp

Tonight's game has been postponed due to inclement weather.

The Birds and GreenJackets will play a doubleheader on Saturday, May 15. Game one begins at 4:05 PM.