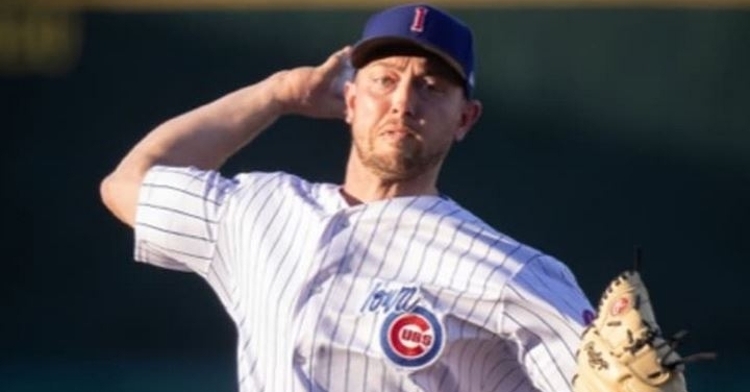 Sampson had a quality performance in the win (Photo courtesy: Iowa Cubs)

At this point in the season, the Cubs system will take any win they can get, as those have been hard to come by. While South Bend and Myrtle Beach may be hovering around that .500 mark, Iowa and Tennessee have lost their way, and the wins have yet to come consistently.

Thursday night showed a lot of promise for the Cubs system as they managed to go 2-2 across the four games, with both wins coming from the teams that needed them. Couple that with the major league team winning, and the Cubs had a successful night on the diamond.

Not much has gone right for Iowa this season, but plenty went right on Thursday. Led by Adrian Sampson delivering his best start of the year, the Cubs pushed across five runs in the first and 12 runs in the first four innings to cruise to an easy win. Sampson was impressive, as he tossed a career-high seven innings of two-run ball to go with eight strikeouts. Ben Leeper and Adam Morgan followed him in relief, each throwing a scoreless inning.

For once, it was the Cubs offense that set the tone, jumping out to a 5-0 lead after one. Michael Hermosillo stayed red hot with an RBI double before coming home on a two-run Trayce Thompson single. A Tyler Ladendorf double and Tony Wolters single capped off a massive first inning as Iowa was in complete command.

Ladendorf added a solo homer in the third to push the lead to 6-0 before Iowa busted out again in the fourth. With the bases loaded, Thompson and Ladendorf took walks pushing across a pair of runs. That is when Nick Martini delivered his biggest hit of the season connecting for a grand slam to make things 12-0 Iowa.

That would be more than enough for the Cubs as Saint Paul pushed across just two runs, with one of those coming on a Daniel Descalso homer.

??What a win! We took a 2-1 series lead with a dominating performance. pic.twitter.com/gf6t4yG2uT

There was plenty of offense to go around in Tennessee as the two teams combined for 20 runs. Thankfully the Smokies were able to come out on top, riding a 4-4 night from Brennan Davis at the plate to pick up the win.

The Cubs' No. 2 prospect has three overall this season. pic.twitter.com/y8WFVAQBDh

Take away one of the worst outings for Cam Sanders, who allowed six runs in three innings, and you had a Tennessee pitching staff who was nearly unhittable in the final six innings of work.

Chuckie Robinson gave the Lookouts a 1-0 lead in the first off, an RBI single, but it was the three-run Lorenzo Cedrola homer in the second that busted things open, giving the Lookouts an early 4-0 lead. The Smokies tried to come back in the bottom of the second with Davis going deep for the first time, but two more runs in the top of the third had the Smokies trailing 6-1.

That is when things began to tilt in the Smokies favor as a two-run Darius Hill single in the bottom of the third closed the gap to 6-3 before Davis singled to make things 6-4. One inning later saw D.J. Artis go deep for his second homer of the season, tying things up ahead of a Christopher Morel double, and just like that, the Smokies had the lead.

Once they had the lead, they never looked back with Carlos Sepulveda (2), Nelson Maldonado (1), Morel (2), and a wild pitch, all aiding to six more Smokies runs as they held a 13-6 lead going into the ninth. Yoel Yanqui picked up a bloop single in that ninth inning but no further damage happened with the Smokies rolling 13-7.

Along with his four hits, Davis drove in two runs and rose his average to .250. Morel joined him with four hits of his own, with Hill and Maldonado adding three.

Christopher Morel 4 for 5 tonight including this bases loaded double to put the Smokies up 13-6 #CubTogether pic.twitter.com/6Mguv788at

Morel led the way with three RBIs and was one of five players with at least two runs driven in.

For the second time this series, the Cubs wasted an early lead as their offense went quiet after the first inning. Add in a catastrophic meltdown by the bullpen that allowed nine runs in three innings, and that is a recipe for disaster in a 12-4 defeat.

With Max Bain on the mound, the South Bend offense gave him plenty of early support as their offense rolled early. Delvin Zinn continued to show his speed, legging out a one-out triple before coming home on Tyler Durna's sacrifice fly. Durna would then come home to score on the Yonathan Perlaza homer as he now has two over his past two games putting the Cubs in front 3-0 in the first.

That score held up through four innings as Bain was on top of things in the early going. However, once the bottom of the fifth inning came, Cedar Rapids started swinging the bats, tying things up off Bain before getting to that pen.

South Bend was able to retake the lead 4-3 in the sixth on a Nelson Velazquez single, but that would be it as it was all Kernels after that. Seth Gray earned a walk driving home the tying run before the Kernels took their first lead off a wild pitch with the bases loaded. Wander Javier would then pick up a sacrifice fly giving Cedar Rapids a 6-4 lead.

That lead continued to grow with the Kernels adding four more in the seventh, three off a Spencer Steer homer, and then two more off the Max Smith single in the eighth to pull away 12-4. Even though the Cubs had plenty of early offense, they finished the game with just six hits, two from Velazquez. Zinn, Perlaza, Durna, and Jake Washer added the final four hits, with Perlaza leading the way with two RBIs.

While most of the system had an easy time scoring runs, the Pelicans certainly did not as they were shut out 5-0, falling to 17-21. Even though DavidJohn Herz bounced back nicely from his worst outing of the season to allow just one run in three innings, the offense wasn't up to the task as Herz is still searching for win No. 1.

The only run Herz allowed proved to be the game-winner in the top of the third when Brett Wisley ripped a line-drive single to right. Charleston doubled their lead in the top of the fifth on the Curtis Mead double before busting things wide open in the sixth.

Garrett Hiott and Michael Berglund picked up RBI singles, while Johan Lopez added an RBI double in that frame. In total, the Riverdogs pushed across three runs that half inning and took a 2-0 game, and turned it into a 5-0 score which ended up being the final.

It is hard to win games with just three hits, and once again, that was the Pelicans issue with Yohendrick Pinango, Jacob Wetzel, and Ethan Hearn grabbing the hits. Gabriel Jaramillo turned some heads in his relief appearance as the righty went three innings, allowing just two hits to go with five strikeouts. Ed Howard was activated from the IL and went hitless in his return.

We did not win this game.