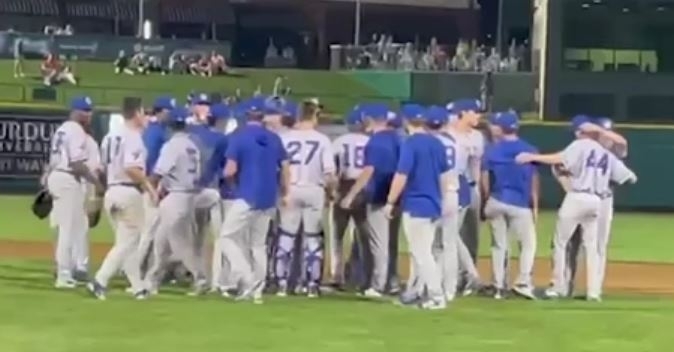 South Bend got the combined no-hitter on Thursday

With wins coming at a frantic pace to start the week, the Cubs were hoping their system could keep it going on Thursday. Unfortunately, they suffered a losing record going 2-3 on the evening, but that didn't take away from plenty of exciting moments.

Not only did the ACL beat the best team in the league, but South Bend set the tone once again, topping the Tin Caps in no-hit fashion. It was the third no-hitter in the Cubs system this season and fourth in the organization if you count the combined no-hitter by the Cubs against the Dodgers. That is by far the most in baseball and another reason why the future will be bright for this team.

After taking it to Omaha the first two games, the Cubs couldn't get it done in game three, falling 2-1. While Omaha possesses the most lethal lineup in all of AAA, pitching was the theme of the night from both sides. Jake Kalish got the ball for Omaha, going 5 2/3 allowing one run, and striking out seven.

Opposing him was Michael Hauschild, who, despite falling to 0-6 on the season, gave the Cubs six strong innings allowing just two runs to go with three strikeouts. The first of those runs came in the bottom of the first when Ryan McBroom put the Storm Chasers in front for good with a sacrifice fly. Three innings later, Travis Jones provided the game-winning run as his single made things 2-0 Omaha.

Looking to get things rolling in the fifth, Abiatal Avelino came through with an RBI single to pull the Cubs within 2-1. Unfortunately for them, they wouldn't get any closer as the Storm Chasers were able to ride a strong pitching performance to the win. Avelino was one of five players with a hit joining Zach Davis, Taylor Gushue, Jared Young, and Levi Jordan.

The one team that Tennessee struggled with the most this season has been Rocket City. You wouldn't have guessed it after the first two games of this season and a large chunk of game three. Holding a 2-1 lead in the sixth, the Trash Pandas rallied for six runs in the final three innings to win 7-3.

Dakota Chalmers continues to improve with each start, and despite going just 4 2/3 innings, he held the Trash Pandas to just one run. That run came in the second inning with Torii Hunter delivering an RBI single for an early 1-0 lead. That score held up until the sixth when Nelson Velazquez went deep for his 15th homer of the season and third with Tennessee to give the Smokies a 2-1 lead.

That lead didn't last long, with David MacKinnon coming through with an RBI double in the seventh to tie things up 2-2. In the eighth, the Trash Pandas

began to pull away as the offense starter to look like the team from earlier in the season. Michael Cruz got things started with an RBI single that put Rocket City on top for good before Luis Aviles picked up the game-winning RBI single to push the lead to 5-2. Brendon Davis capped off the four-run frame with a sacrifice fly as the Trash Pandas led 6-2.

As if one homer wasn't good enough, Velazquez answered the call by going deep a second time in the eighth to pull within 6-3. That would be all the offense they would get the rest of the game, where Mitch Nay added a homer of his own to win 7-3. Velazquez had his best game as a Smokie going a perfect 4-4 with two homers and all three RBIs. Brennen Davis added another hit while Christopher Morel, Chase Strumpf, and Andy Weber rounded out the hits.

Game three goes to the Trash Pandas. HOWEVER, we are back in action tomorrow night for 80’s Night! Tickets are available at https://t.co/flt7nnZNNr and gates open at 6:00pm. #SmokiesBaseball #GoSmokies pic.twitter.com/Bo2DYwzY5u

Even though the wins weren't as prevalent on Thursday, South Bend gave the Cubs fans plenty to cheer about toping their in-state rival 3-0. Not only was it a shutout, but three pitchers combined to give the Cubs organization their third minor league no-hitter of the season.

Alexander Vizcaino got things started as he continues to pitch well since coming over. In just two innings of work, Vizcaino struck out three while continuing to flash upper 90's heat. Joe Nahas followed him up, giving the team six innings of work out of the pen, allowing one walk while striking out six. He turned things over to Burl Carraway, who locked down his second career save to preserve the no-hitter.

All the Cubs offense came in the seventh inning, but when you look at the pitching, it didn't matter when or where it came from. Bryce Windham will get credit for the game-winner as his RBI single put the Cubs in front 1-0. The red-hot Yonathan Perlaza continued his recent surge with a two-run double to cap off the 3-0 win.

While the Cubs no-hit Fort Wayne, the offense wasn't easy for South Bend, with Tyler Durna collecting two of the team's five hits. Harrison Wenson collected a hit to join Perlaza and Windham while Alexander Canario's streak of four games with a homer came to an end.

South Bend tosses first no-hitter since May 5, 2019! That makes it six wins in a row for the Cubs.#SBCubs #Cubs pic.twitter.com/WY6wZciJBT

The Pelicans may have taken game one of the series, but they are finding out firsthand why Charleston is so good. Despite Tyler Schlaffer and Jared Wright keeping things close through seven innings, the Riverdogs erupted for five runs in the final two innings to cruise to an easy win.

Charleston not only struck first in the third, but those two runs would be all the offense they need with Alexander Ovalles and Abiezel Ramirez picking up RBI singles. They extended that lead to 3-0 in the fifth with a Tanner Murray homer, as that was the brunt of the offense until late in the game. Even with a three-run lead, the Riverdogs felt they needed more support and certainly got that across the final two frames.

Michael Berglund added to the lead with a sacrifice fly in the eight before Alika Williams picked up his own sacrifice fly. Murray continued his hot start with Charleston, adding an RBI single as the Riverdogs led 6-0. Singles by Berglund and Williams in the ninth capped off the shutout win with the Pelicans falling 8-0.

Not only did the Pelicans have just five hits, but they also walked once compared to 11 strikeouts as they couldn't get much going. Jacob Wetzel was one of five players collecting a hit in the loss, joining Matt Mervis, Pablo Aliendo, Jonathan Sierra, and Fabian Pertuz. Kevin Made and Jordan Nwogu combined to go 0-8.

With the DSL League getting rained out across the board yesterday, the ACL Cubs were the lone rookie league in action, and they delivered with an exciting win. Against one of the best teams in the ACL, the Cubs managed to rally late and then hold off a Rockies rally to secure a 9-8 extra-inning win.

Andricson Salvador was impressive, going four innings and allowing two earned runs to bring his ERA to 1.93 on the season. He didn't walk a batter and struck out six. The Rockies helped Salvador and the Cubs early on as a pair of miscues in the field led to a 2-0 lead in the first. The Cubs returned the favor in the second with an error of their own before the Benjamin Sems single tied things up 2-2. One inning later saw the Cubs take the lead once again, with Reggie Preciado delivering an RBI double before Miguel Fabrizio added to the lead with a single.

The Cubs continued to build on that lead as a sixth-inning error pushed the lead to 5-2 ahead of the Fabrizio single in the seventh, making things 6-2. The bottom of the eighth is when the Rockies began to make their comeback, with Eric Stamets and Hunter Goodman picking up RBIs before a wild pitch made things 6-5.

A Rafael Morel groundout extended the Cubs lead to 7-5 in the ninth only to see the Rockies tie things up on the Adael Amador single and another wild pitch to send the game to extras. In the extra frame, Juan Mora cashed in with a clutch RBI triple, plating a pair of runs to make things 9-7. That second run proved crucial as the Cubs balked in a run in the bottom of the inning, but managed to hold on for the 9-8 win.

Fabrizio and Preciado had great nights at the plate collecting three hits to pace the offense. Preciado is hitting .359 on the season, with Fabrizio hitting .371. 2021 second-round pick James Triantos picked up his first multi-hit game of his career with Ismael Mena grabbing a hit. Owen Caissie went hitless, but did manage to draw two walks.