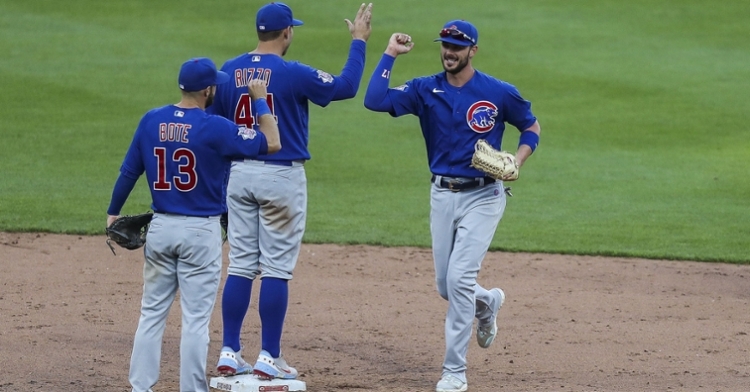 CINCINNATI — Overcoming an early 2-0 deficit, the Chicago Cubs (12-15) won in come-from-behind fashion over the Cincinnati Reds (12-14) on Saturday. The later innings featured plenty of excitement, including a bench-clearing confrontation, and the Cubs were able to hang on for a 3-2 win at Great American Ball Park. Nico Hoerner went 3-for-3 at the plate and drove in what proved to be the winning run in the top of the sixth. The Reds squandered a golden opportunity to tie or take the lead in the bottom of the ninth, with Craig Kimbrel notching the save.

Zach Davies struggled to begin his start, giving up two runs in the first inning. Tyler Naquin doubled in the Reds' first at-bat of the game and scored on the ensuing play. Nicholas Castellanos hit an infield single to third base, where David Bote attempted an unnecessary throw to first base that resulted in a throwing error. Naquin came home as a result of the error, and Castellanos was able to cross the plate later in the inning because of a sacrifice fly hit by Mike Moustakas.

Luis Castillo faltered in the top of the third, starting with a leadoff double from Hoerner. Tony Wolters advanced Hoerner to third via a base hit, and a safety squeeze worked out when Davies laid down a bunt that scored Hoerner and moved Wolters to second. Castillo limited the Cubs to one run in the inning, though. The Reds loaded the bases with two outs in the bottom of the third, but Davies escaped the jam by striking out Eugenio Suarez.

.@Cubs push a run across in the 3rd! pic.twitter.com/kWuMG6cVzl

In the fourth, a two-out double by Bote gave way to an RBI single by Jason Heyward, who was tagged out while attempting to score on a Hoerner base knock soon afterward. The Cubs challenged the ruling of Heyward being called out, but the out call stood. Davies once again worked himself out of a bases-loaded pickle in the fourth, when he forced Castellanos to hit into an inning-ending groundout. Castellanos suffered a defensive blunder while fielding an Ian Happ single in right field during the fifth, but it ultimately paid off for the Reds, as Eric Sogard tried his luck on heading from second to third, where he was tagged out.

Rex Brothers struck out the side in the fifth, despite being evaluated by trainers in the midst of the inning. Baez singled to lead off the sixth, and a walk of Anthony Rizzo followed. Castillo was relieved with one out, and Sean Doolittle took the bump. Following a strikeout of Heyward and an accompanying steal by Baez, Hoerner plated Baez from third base by smacking a go-ahead single. Hoerner stole second thereafter, but Wolters struck out to end the inning and leave two runners stranded in scoring position.

Drama unfolded when Amir Garrett struck Rizzo out swinging and barked at Rizzo about it. Both benches emptied, and Baez had to be held back from confronting Garrett, who has a history of starting beef with the Cubs. No ejections took place, and Garrett finished the scoreless inning on the mound. Back-to-back singles by Tyler Stephenson and Tucker Barnhart placed runners on the corners with no outs in the bottom of the ninth, as pinch runner Jeff Hoffman made it to third on Barnhart's base hit. Kimbrel never folded under pressure, however, striking two straight batters out looking and forcing Castellanos to ground out, thus locking up the Cubs' 3-2 triumph.

Amir Garrett strikes out Anthony Rizzo, words are exchanged and then both benches clear during the Reds and Cubs game. pic.twitter.com/dGX508V2Gh