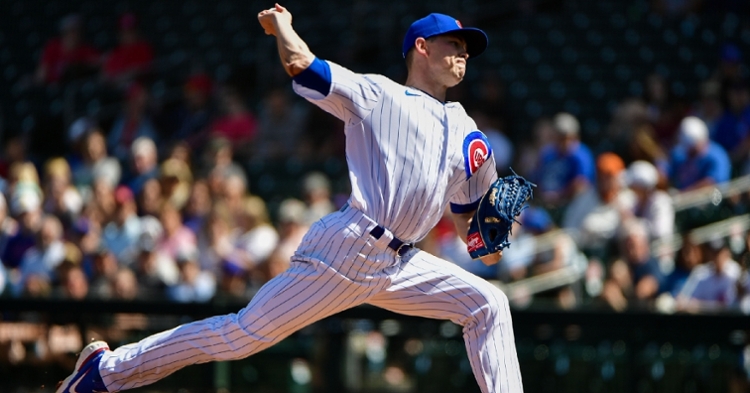 If the early signs of spring training are a sign of things to come, their offense could be in for a long season. In a league where baseballs fly out of the yard, the Cubs are having a tough time scoring runs, which doesn't bode well for the regular season.

On the flip side, their pitching has looked strong, and with the amount of depth they have acquired, that could be what steals the show this season. After falling behind 2-1, the Cubs started to insert many of their bench players to get their work in for the day. That proved to be a good thing as the Cubs rallied for the 3-2 win moving to 3-2-1 on the spring.

Chicago was very busy on the mound on Monday as they went through seven pitchers. Keegan Thompson was first on the list, who was making his spring training debut. Competing for a spot in the rotation, Thompson had all of his pitches working as he allowed just a pair of hits to go with his three punchouts. Both those hits came in the second inning, but a huge strike him out throw him out double play ended the threat.

After going down quietly in the first inning, the Cubs bats were back at it in the second as they were looking to take the lead. Alfonso Rivas got things started with a single before moving to second on the Michael Hermosillo hit by pitch. Brennen Davis followed suit by getting hit by another pitch and then was removed from the game for precautionary reasons. With the bases loaded and one down, Sergio Alcantara put the Cubs in front as his RBI ground out saw the Cubs take a 1-0 lead.

Following Thompson's outing, it was time for Cory Abbott to take the mound as he, too, is competing for a major league spot. Abbott struggled with his command, walking a pair of hitters, but managed to get out of the jam inducing a double play to keep the Cubs in front. Following another scoreless frame, it was time for the Reds to get on the board, capitalizing off Jonathan Holder in the fifth.

After making quick work of his first two hitters, Miguel Hernandez took the first pitch from Holder and ripped it for a double. One pitch later saw Tyler Naquin single to left field as Hernandez came around to score, tying things up 1-1. One inning later saw the Reds grab a 2-1 lead as Mike Moustakas took Stephen Gonsalves deep for their first lead of the afternoon.

The Cubs had a golden opportunity to pull even in the sixth as Donnie Dewees led things off with a single. Chase Strumpf picked up a single with two down in the inning before the Darius Hill walk loaded the bases. Unfortunately, the Cubs came empty as P.J. Higgins was caught looking at a breaking ball, and the Reds still led 2-1.

Coming in to pitch the seventh was Eric Yardley, who was lights out. Across his two innings of work, not only was Yardley making the Reds hitters look foolish, but he allowed just one ball out of the infield while striking out four, keeping Chicago within a run. Two innings after wasting a golden opportunity, the same part of the order was doing damage again, with Dewees leading things off with a triple.

One batter later, it was John Hicks coming through as his ground-rule double tied things up 2-2 and gave Hicks his team-leading fourth RBI. A walk to Jared Young put a pair of runners on base, but Hicks was thrown out in a rundown, killing what could be a potential rally. Fortunately for the Cubs, Hill had none of it, showing great patience to work a walk and loading the bases again with two outs.

On that fourth ball of the at bat, the Cubs would take the lead as a wild pitch allowed Young to trot home, putting the Cubs up 3-2. Still, with the bases loaded, Higgins had a chance to play hero again, but came up empty as his pop-out sent the Cubs to the ninth leading 3-2. Three outs away from finishing things off, David Ross called on Erich Uelmen to close things out as he made his first home appearance of the spring.

Uelmen had a rough season in 2021, sporting a 5.87 ERA in the minors, and saw Allan Cerda greet him with a leadoff single to left to open the inning. What happened next is precisely what the Cubs want to see out of Uelmen as he went on to strike out the next three hitters to preserve the 3-2 Cubs win.