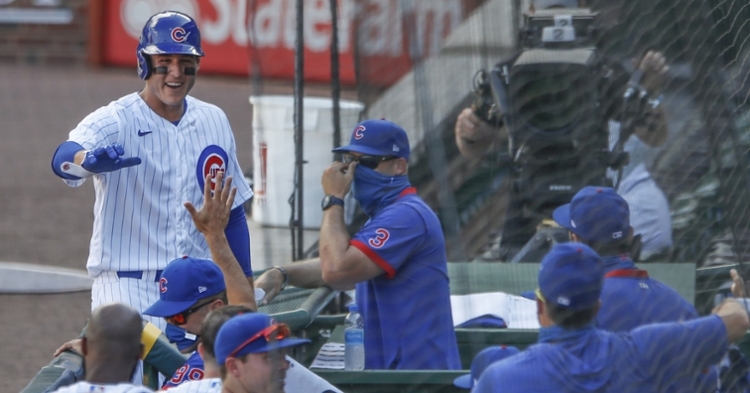 While the MLB is still currently in their lockout, which includes a transaction freeze, there have been many reports of potential signings and team interests once the lockout ends. One of the most recent reports surrounding the Chicago Cubs is that they will explore signing Anthony Rizzo to a multi-year contract.

From a strictly baseball sense, the move certainly does have merit. Rizzo will be turning 33 this season and is coming off of a down season — where he hits .248 with 22 homers and 61 RBIs. Rizzo certainly does have value, especially on the defensive side of the ball, as he won a Gold Glove as recently as 2020.

Rizzo has one of the best contact skills of any player in the league, but he pairs that with above-average power from the left side of the plate and an exceptional eye — which keeps his career on-base percentage average well above .350.

With the designated hitter officially coming to the national league permanently, signing Rizzo would have a great fit on this current Cubs team. The Cubs could bolster their defense — that will be seeing a lot of ground balls — while also saving a spot in the lineup for the worse defender in Frank Schwindel.

Schwindel hit .342 in 56 games with the Cubs and has a bat that the Cubs are expecting to keep in their lineup this season and potentially in the future. Signing Rizzo would still allow Schwindel to hit regularly while also having a solid backup for Rizzo if he needs a day off with his flaring back issues or wants to take a day off of the field.

Baseball-wise, the move makes sense. Signing Rizzo would not break the bank, and he still has plenty of value in his 33-year-old season.

That does not even include the nostalgia and impact factor that comes with the World Series Champion. Signing Rizzo would come with an instant boost of morale and allow the Cubs to properly send off the Cubs’ legend on a great career.

Rizzo left the Cubs in choppy fashion at the 2021 trade deadline to the Yankees, but not before leaving an ultimate mark in Chicago that includes numerous records, four Gold Gloves, three all-star appearances, a silver slugger award, and of course, a World Series Title.

The move would also allow the Cubs to capitalize on Rizzo at the trade deadline by getting prospects and still getting Rizzo back.

It is unknown if Rizzo would want to come back, especially since he just moved out of Chicago, but the Cubs fans certainly and reportedly the Cubs would welcome a return.

Assuming no other signings are made, and no prospects make a jump at an eventual Spring Training, here is a projected Cubs lineup if Rizzo is resigned.

The league is still in a lockout, but we’ll see if this rumor gains traction when the lockout ends.

Cubs have had ’internal conversations’ about pursuing Anthony Rizzo once free agency restarts, per @MLBBruceLevine pic.twitter.com/LSCULYfQNU

RT to bring Anthony Rizzo (@ARizzo44) back to Chicago.

Remember that 14 pitch at-bat? This is what we live for. pic.twitter.com/Eklzqxpoyz