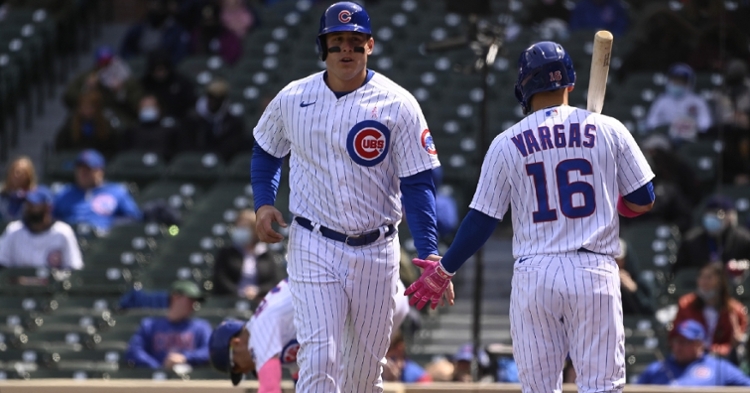 CHICAGO — A valiant comeback attempt fell just short for the Chicago Cubs (17-17) on Sunday, ending their five-game winning streak and wrapping up a 5-1 homestand. The North Siders were unable to complete their second consecutive three-game sweep, as the Pittsburgh Pirates (14-19) survived a ninth-inning surge by Chicago and eked out a 6-5 victory at Wrigley Field. Tyler Anderson pitched eight innings of two-run ball before the Buccos' bullpen nearly squandered his solid outing. The Cubs plated three runs in the bottom ninth before Javy Baez grounded out with a runner in scoring position.

Kyle Hendricks' early-inning woes continued, as he gave up four runs in the top of the first. Hendricks certainly did not catch any breaks in the first frame, though, as the Pirates utilized soft contact and bloop hits in taking an early lead. Two straight singles and a walk opened the game, and a Jacob Stallings groundout then plated Adam Frazier. With two outs, Wilmer Difo hit a flare to shallow left-center that scored Kevin Newman and Ka'ai Tom. Unfortunately, Jake Marisnick was injured while pursuing the blooper, and he subsequently departed the game due to what appeared to be a right leg injury.

Following a single by Todd Frazier that placed runners on the corners, shortstop Ildemaro Vargas committed an error on a throw to first base that Anthony Rizzo was unable to corral. As a result, Difo crossed the plate. Hendricks stopped the bleeding by striking out Anderson. Kris Bryant led off the bottom of the second by hitting a double that one-hopped the wall in left. A groundout moved Bryant to third before Joc Pederson, who replaced Marisnick in the lineup, plated Bryant with a two-out RBI base hit to center.

Joc cuts into the lead. pic.twitter.com/cRmE8LlCIK

Erik Gonzalez singled in the top of the third and then scored on an RBI triple smacked off the wall in right by Difo. Difo scored when Matt Duffy committed a fielding error at third by failing to glove a grounder hit by Frazier. With the Cubs trailing 6-1, Rizzo led off the bottom of the fourth with a base knock. Bryant proceeded to draw a walk, and a David Bote flyout advanced Rizzo to third. Rizzo was then ushered home by an RBI groundout off the bat of Jason Heyward. Following an infield single by Pederson, runners were on the corners with two outs, but Vargas left them stranded by flying out. Justin Steele went six up, six down in his two innings of relief, and Dillon Maples tossed a 1-2-3 eighth.

The Pirates placed runners on second and third with one out in the ninth, but Jason Adam escaped the jam. Kyle Crick trotted out to pitch the bottom of the ninth and plunked Rizzo with his very first pitch. Bryant walked after that, and Rizzo tagged up and moved to third when Bote flied out. Richard Rodriguez relieved Crick at that point and struck out pinch hitter Nick Martini. Down to his last strike, Pederson kept the Cubs alive by poking an RBI single through the infield that scored Rizzo and advanced Bryant to third.

Vargas then hit a two-run double with two strikes. The two-bagger to deep right plated Bryant and Pederson and brought Baez to the plate. Baez did not start on Sunday after leaving Saturday's game with back tightness. "El Mago" famously hit a walkoff home run on Mother's Day in 2016, and he had the opportunity to do just that again when pinch hitting against Rodriguez. The eight-pitch at-bat ended in deflating fashion for the Cubbies, though, as Baez grounded out to second, thereby concluding a 6-5 Cubs loss.