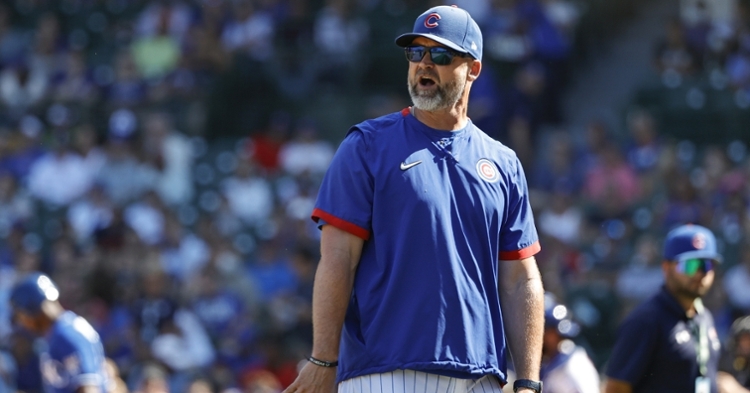 CHICAGO – Wrigley Field is starting to become a season-long nightmare for the Chicago Cubs (54-72) as they fell to .500 at home on Sunday against the Kansas City Royals (55-68). Looking to keep a strong string of good starts together was Alec Mills (5-6) as he faced off against the young hard-throwing Carlos Hernandez (4-1).

Unlike most of his starts since returning to the rotation, Mills suffered a rare rough outing where he couldn't get into the fifth inning. A big reason for that was the early offense for the Royals as they continue to get the job done against the Cubs, putting the leadoff man on base in seven straight innings as they tagged Mills with six earned runs in the win.

Hunter Dozier not only opened the scoring for Kansas City with an RBI single in the second, but put them in front for good as they never trailed on Sunday. Andrew Benintendi and Whit Merrifield were thorns in the Cubs side all series. Benintendi picked up a two-RBI double in the second before Merrifield extended the lead to 4-0 with a sacrifice fly in the fourth.

Still, batting in the fourth, the recently engaged Nicky Lopez cashed in with an RBI single as the Royals built their lead to 5-0. That was more than enough for Hernandez as he was sharp all game long, giving the Royals seven strong innings on the mound allowing just one earned run to go with three walks and eight strikeouts.

That run came in the bottom of the fourth when Matt Duffy started a new hitting streak with an RBI single to make things 5-1. Unfortunately for the Cubs, that was all the offense they would get as the Royals ended the game with four unanswered runs, including an RBI double by Dozier in the fifth, followed by a Michael A. Taylor sacrifice fly to push the advantage to 7-1. Benintendi picked up a sacrifice fly of his own in the top of the sixth ahead of the Carlos Santana RBI single as the Royals complete the sweep of the Cubs at Wrigley 9-1.

It is hard to believe that the Cubs once had one of the best records at home in all of baseball. That seems like many eons ago, but it was as recent as Mid-June when they posted that mark. Since then, Wrigley Field has been a nightmare for this team as fans from around the country have watched them crumble to the ground.

Following yet another sweep at home, it marks four straight home sweeps, and the Cubs have now lost 13 consecutive games at home. That mark lands this team with a new futility mark as the current streak is the worst in franchise history. That is not a list you want to be at any point, let alone when playing in front of the home crowd.

When this homestand began, you looked at the schedule and had to like the Cubs chances to win at least four of six. Now following the sweep, the best the Cubs can hope for is a .500 mark which may be hard to achieve. With the Rockies coming to town sporting the worst road record in the national league, the Cubs need to get their home mojo back, or it will be an empty-looking stadium by September.

Rafael Ortega has been one of the hottest hitters in baseball in August. Going further back to the all-star break, Ortega is posting a .353 batting average, good for second-best in all of baseball. He was hitting a .391 post-all-star break at one point because he was hitting over .400 in August.

There was no way he was going to keep that pace up for the rest of the season, and with more playing time comes more time for pitchers to figure him out. That is precisely what is happening right now, as Ortega has seen his average fall to .307 after another hitless day. This marks a stretch where he is just 3 for his last 28 and hasn't been getting on base as much.

The Cubs offense has struggled to score yet again in the process, as Ortega was a big reason this team was scoring runs. Ever since spring training, Ortega has been one of the bright spots for this team, putting together an excellent spring training and now regular season. Not expected to do much of anything this year, Ortega has been thrown into a starter's role for the first time in his career, and the Cubs are seeing what he can do.

For a team that will most likely be rebuilding again in 2022, Ortega is someone who could be playing for a starting job in 2021 with the Cubs or another team. A slump like this was bound to happen at some point, but now it is up to him to counter the adjustments the pitchers have made on him to adjust back and prove he deserves a shot next season.

The Cubs can learn something from KC

While the Royals will not make the playoffs this season and may not be considered contenders right now, they are close. Given the job Mike Matheny has done with this team this season and looking at the prospects sitting in AAA, the Cubs could learn something from this team and apply that to their new rebuild.

You have to give the Royals some credit. Not only did they battle decades of struggles to finally reach a world series in 2014, but they managed to return to the world series in 2015, where they came away champions that season. That is more than what the Cubs can say over the last decade. Like all small-market teams, finances get in the way, as this team had to blow it all up just one year after winning it all.

While they knew it was coming, it wasn't going to be easy, and now the Royals have been on the rebuilding track with a chance of being a force in the new future. A big reason for their turnaround is the pitching staff that is anchored with young and powerful arms. The Cubs saw three of those arms this weekend, and Hernandez could be the best of them all. The Royals also have plenty of bullpen talent as they try to recreate the three-headed monster they once had.

Offensively, Salvador Perez and Merrifield are the primary leaders of this group, but they have a plethora of big boppers in the minor leagues who will be making their presence felt soon. You get the feeling of the 2015 Cubs all over again where they had endless powerful position players ready to pounce.

That brings me to the Cubs and the lesson they can take from this team. If you look at what the Royals did to get to their position, it all starts with young, controllable pitching, which the Cubs haven't had a ton of. Although the team is beginning to see it now with Adbert Alzolay, Justin Steele, and Keegan Thompson, the organization still needs to develop more arms.

Another thing this team lacks is the dominating bullpens that many teams have now, where everyone comes out throwing 97 plus. Sure, the Cubs have some pitchers who are major league-worthy, but no one scares an offense outside of Brailyn Marquez and a few others.

Ultimately, the future of the Cubs all boils down to the success of the position players they acquired for their core this season. Fans have seen what the Royals prospects are doing in AAA right now, and there is a chance the Cubs can have that two with the likes of Brennen Davis and Alexander Canario making a ton of noise.

It will take more than two players to change the fortune of this franchise, but the Cubs have a good base in place. Now it all boils down to development, and if you ask me, the Cubs have failed miserably in that department in every facet of the game.