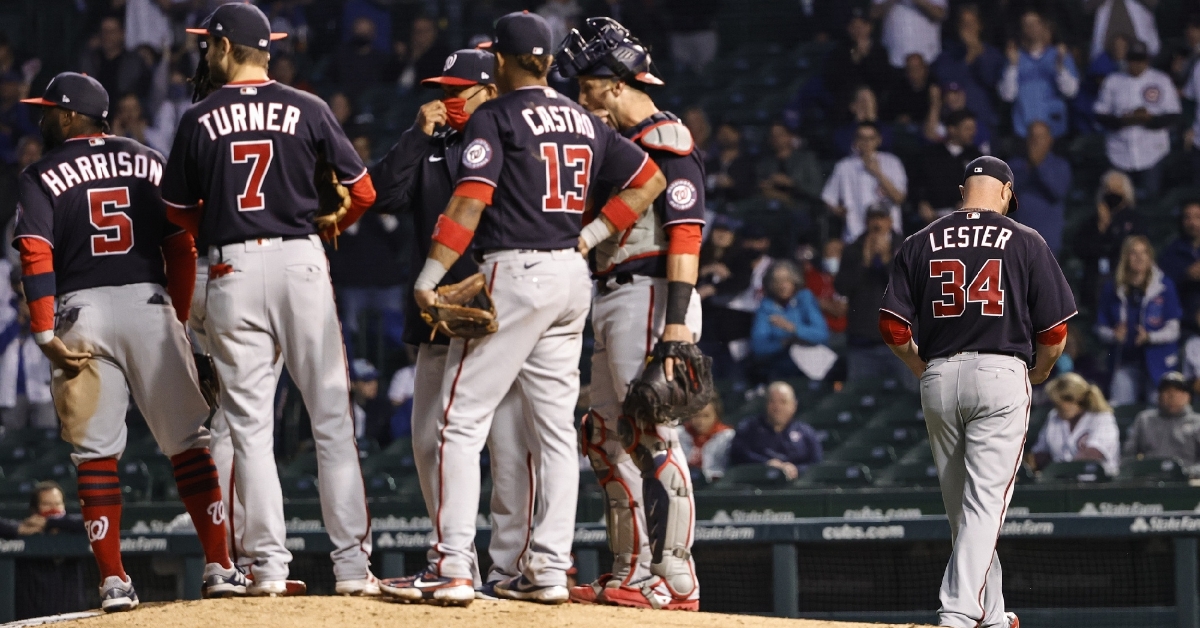 CHICAGO — Spoiling the return of Jon Lester and Kyle Schwarber to Wrigley Field, the Chicago Cubs (20-20) homered three times off Lester and won 7-3 in the first meeting of the season between the North Siders and Washington Nationals (16-21) on Monday. While Lester gave up five runs and received the losing decision for his 5 1/3 innings pitched, Kyle Schwarber tagged Adbert Alzolay for a two-run homer. Lester and Schwarber departed the Cubs and joined the Nationals in the offseason, and the Cubs had the upper hand in the reunion, taking the opener of the four-game series by the final score of 7-3.

Schwarber received a standing ovation when stepping up to the plate in the first frame. He subsequently hit a grounder that resulted in the third out, and Lester then received a standing ovation of his own while throwing his warmup tosses prior the bottom of the first. Willson Contreras hit a leadoff single off his former batterymate in the bottom of the first. Kris Bryant advanced Contreras to third with a base knock of his own, and Anthony Rizzo then flied out to Schwarber on the first pitch, with the sacrifice fly enabling Contreras to come home. Lester then forced Javy Baez to ground into an inning-ending 6-4-3 double play.

Jon Lester taking the mound at Wrigley again to a standing ovation pic.twitter.com/l2b03fouPo

After Alzolay drew three consecutive groundouts on six pitches in the second, Matthew Duffy recorded a leadoff single that was followed by Jason Heyward taking Lester deep with a two-run shot to left. Schwarber could only watch as the opposite-field jack flew over his head, putting the Cubs up 3-0 in the bottom of the second. Lester received another standing ovation when stepping up to the plate to lead off the third. He proceeded to ground out to Rizzo, who nonchalantly made an underhanded toss to Alzolay for the putout at first and shared light-hearted moment with Lester thereafter. Trea Turner went yard off Alzolay later in the inning, clubbing a 423-foot solo shot to left.

Trea Turner is the only SS in @MLB with 10 HRs this season.

Contreras gained the run back for the Cubs in the aftermath of Turner's dinger by swatting a leadoff homer over the wall in left to begin the bottom of the third. A few at-bats later, Rizzo attempted to stretch a single to center into a double but was gunned down, with former Cub Starlin Castro applying the tag at second. Josh Bell notched a leadoff single in the fourth, and Schwarber then collected his lone hit of the night with a 407-foot "Schwarbomb." The home run ball was thrown back onto the field, leading to Schwarber obtaining the souvenir. The Cubs turned a Yan Gomes grounder into a 4-6-3 double play that ushered in the home half of the fourth.

Throw every opponents home run ball back, even if it's Kyle Schwarber. pic.twitter.com/gtYJMMSzlu

Ian Happ led off the bottom of the fifth with a ground rule double, and David Bote then pinch hit for Alzolay, thereby ending his start. Bote struck out prior to Contreras moving Happ to third with a groundout, and Bryant left Happ stranded by flying out. Baez caused Lester to get yanked with one out in the fifth by crushing a 415-foot solo shot to right. After giving up the opposite-field round-tripper, Lester was once again given a standing ovation while heading to the dugout.

The most knowledgeable fans in baseball give team icon @JLester34 a standing ovation as he is removed from the ballgame following a Javy Baez HR blast.@Cubs #GoCubsGo pic.twitter.com/0EOTiXOXYf

Nico Hoerner began the bottom of the seventh with a single and then took second on a wild pitch and third on a throwing error committed by Gomes after he corralled the wild pitch. Soon afterward, Eric Sogard tacked on an insurance run with an RBI single that plated Hoerner. Sogard stole second with two outs but did not score. The Nats loaded the bases in the eighth, with a walk issued to Schwarber by Andrew Chafin bringing Castro to the plate with two outs and the bases juiced. Hoerner then bailed out Chafin by making a spectacular diving stop off a chopper hit by Castro. Hoerner fired to Rizzo at first for the third out, thus electrifying Chafin and the raucous crowd at the Friendly Confines.

Rizzo batted a leadoff double in the eighth and scored from second on a two-out RBI single by Heyward. 30-year old Tommy Nance made his MLB debut by toeing the rubber in the ninth. He struck the leadoff man out swinging and then drew two groundouts in a row to secure the Cubs' 7-3 victory over the Nationals. Entering the contest, Lester had not yet given up a home run on the year, but the Cubs took him deep three times, which made the ultimate difference in the emotional matchup.