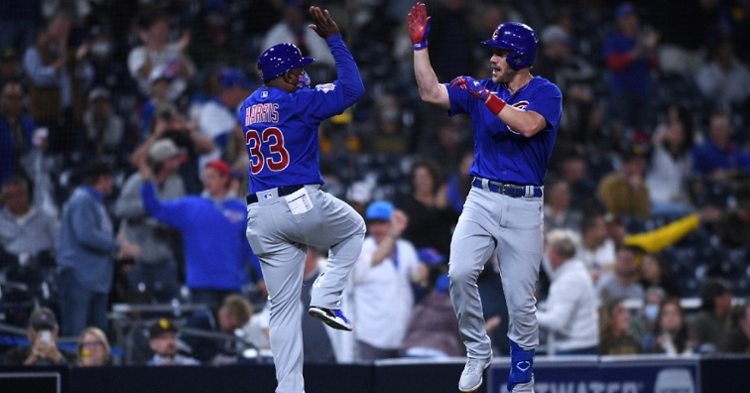 SAN DIEGO — Making his first start of the season against the team that traded him in the offseason, Zach Davies shined in his six scoreless innings, striking out four and getting taken for just one hit and two walks. He went on to earn the winning decision, with the Chicago Cubs (34-27) defeating the San Diego Padres (37-26) 7-1 at Petco Park. The Cubs homered three times and did not give up a run until the bottom of the ninth.

Offense was scarce in the early goings, with the first hit not taking place until the fourth inning. In the top of the first, Anthony Rizzo was hit by a pitch from Dinelson Lamet that bounced off the dirt and into Rizzo's lower body. Rizzo did not score, however, but he did team up with second baseman Eric Sogard to end the bottom of the first, with a runner getting doubled off at first after Sogard caught a line drive. Jason Heyward drew a walk in the second and was initially picked off at first to end the half-inning before a successful Cubs challenge overturned the call.

The first run was not scored until the top of the fourth, though, with Willson Contreras blasting a 419-foot no-doubter to left for the game's opening hit. Davies gave up a single to Fernando Tatis Jr. in the bottom half of the frame, marking the Padres' first hit. After both teams went down in order in the fifth, the Cubs kicked off the sixth with back-to-back singles by Joc Pederson and Kris Bryant, and Rizzo then plated them with a two-run double to deep center.

Miguel Diaz relieved Lamet after that and went on to give up a two-run lined shot off the bat of Patrick Wisdom. The dinger to left scored Rizzo and served as Wisdom's eighth home run of the year, thus making him the first player in the modern era to hit at least eight homers in his first 36 plate appearances as a starter in a single season. Heyward then walked, and an error committed by Jake Cronenworth in an attempt at fielding a Sergio Alcantara grounder at second base allowed Heyward to reach second. The two runners were left stranded, though, as Sogard grounded into an inning-ending 1-6-3 double play.

After his 6th-inning homer tonight, Patrick Wisdom of the @Cubs now has 8 home runs in 36 plate appearances as a starter this year.

He's the first player in the modern era to hit 8+ HR in his first 36 PA as a starter in a season (rookie or not).

Pederson doubled off Nabil Crismatt in the seventh, and Rizzo swatted an opposite-field two-run homer to left with two outs, increasing the Cubs' lead to 7-0. Wisdom caught a liner hit by Eric Hosmer in the seventh and doubled off a runner at first for an inning-ending 5-3 double play. Andrew Chafin and Tommy Nance combined to pitch a scoreless eighth and ninth, respectively, and Alec Mills finished the game off with a one-run ninth. Making his first appearance since May 15 after returning from injury, Mills gave up an RBI double to Kim Ha-Seong, which scored Tommy Pham, to break up the shutout, but struck out the final two batters, securing the Cubs' 7-1 victory.