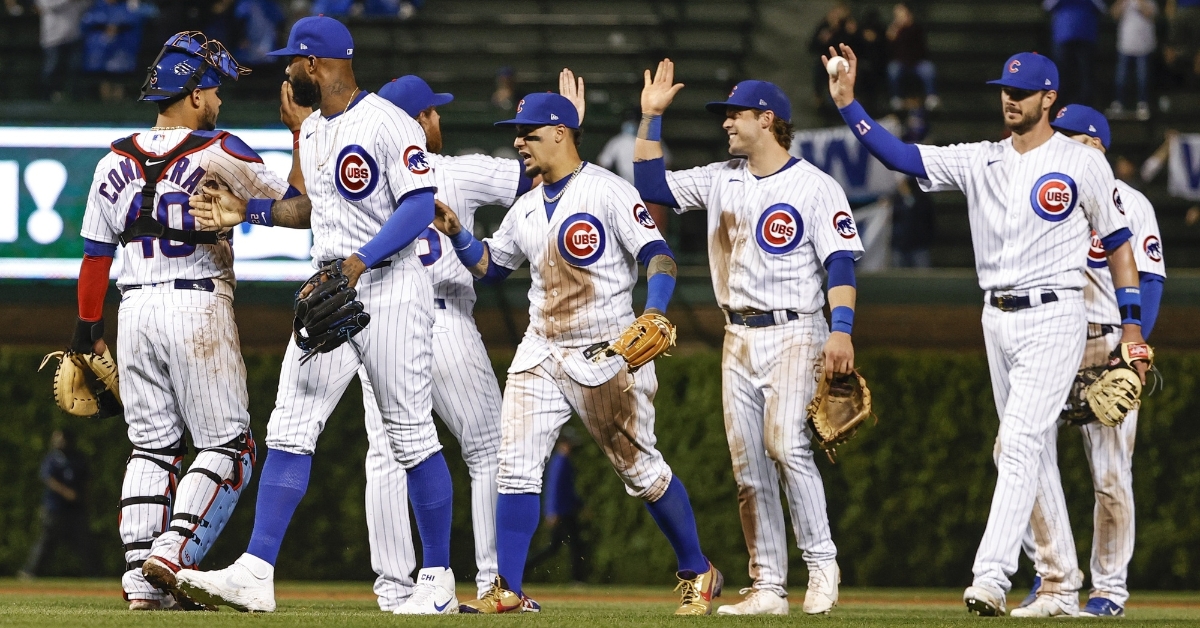 CHICAGO — On a wet, humid night at Wrigley Field, the Chicago Cubs (21-20) fought through the light rainfall and defeated the Washington Nationals (16-22) for their third straight win. Pounding out 13 hits at the plate, the Cubs were offensively efficient on evening, going yard twice and winning 6-3. Unfortunately for the North Siders, Anthony Rizzo was pulled in the fifth inning due to lower back tightness and did not return.

Zach Davies gave up a single to Ryan Zimmerman with one out in the first, which Nico Hoerner laid out for at second before making a throw to first that was not in time, and then walked former Cub Kyle Schwarber. The Nationals failed to score in the first frame, though, as Rizzo robbed Starlin Castro, another erstwhile Cub, of a line drive hit with leaping a grab at first base for the third out. In the bottom of the first, Patrick Corbin forced Rizzo to ground into an inning-ending double play. The next frame ended with a double play groundout hit into by Ian Happ.

He's won a Platinum Glove for a reason. pic.twitter.com/ZI1pn90QF2

A chopper hit down the third baseline by David Bote resulted in a leadoff single in the third. The ball sported plenty of English as it bounced over third base, and Castro did not have enough time to field it and make a throw to first. Nico Hoerner then hit a screamer to shortstop that he converted into an infield hit. Davies advanced both runners with a sacrifice bunt, and Willson Contreras plated both runners with a two-run single to shallow right. Contreras was then thrown out stealing second. The Nats challenged the original safe call, which was overturned.

Rizzo showed obvious signs of discomfort when warming up prior to the start of the fourth frame, and trainers came out to check on him. He grounded out to end the third inning shortly before that. After remaining in the game, Rizzo committed a rare fielding error when he misplayed a grounder hit by Schwarber. A 6-4-3 double play ended the top of the fourth, with Rizzo completing the play at first, and Rizzo subsequently headed to the clubhouse. Kris Bryant took over for him at first in the top of the fifth, with Jason Heyward entering to take Bryant's place in right field.

Davies hit Yan Gomes with a pitch to lead off the fifth, and Corbin moved Gomes to second with a sacrifice bunt. Trea Turner came up with a two-out RBI single to center, which plated Gomes, and two straight singles followed, with an RBI base knock by Zimmerman scoring Turner. Hoerner hit a leadoff single in the bottom half of the inning and advance to third Davies' second sacrifice bunt of the contest. Contreras singled, putting runners on the corners, and Bryant reached on an RBI infield single that ushered Hoerner home. Corbin prevented the Cubs from adding to their lead by striking the next two batters out.

Castro retied the game with a leadoff blast hit out to center in the sixth. The dinger, which Davies gave up, sailed 433 feet. Keegan Thompson entered the game after Josh Harrison smacked an ensuing single, and a wild pitch by Thompson allowed Harrison to take second. Javy Baez then made a nice catch of a hard-hit liner off the bat of Gomes, and Thompson recorded two straight strikeouts thereafter, leaving Harrison stranded.

Will Harris walked Matt Duffy to kick off the bottom of the sixth, and Bote walloped a 407-foot two-run blast a few at-bats later, with the homer off Harris carrying 407 feet out to center. Thompson collected his first career hit with a two-out base knock, and Turner then committed a throwing error to first after making a difficult stop of a grounder hit by Contreras. Following a pitching change, Bryant flied out, leaving runners stranded at the corners.

When you make a mistake, there’s a consequence you must endure here within our Confines.@BinnysBev #CubTogether pic.twitter.com/sCd3O51OGI

.@kthompson_7 can do it all pic.twitter.com/VZcEdw9Xog

Steele relieved Thompson after Juan Soto doubled and Zimmerman walked with one out in the seventh. He proceeded to strike out Schwarber and force Castro to hit a dribbler that ended the half-inning. Upon fielding Castro's grounder, Steele fired a low throw to Bryant, who successfully dug it out. Baez singled in the bottom of the seventh but was then caught stealing, with the Cubs unsuccessfully challenging the ruling on the failed steal attempt. With two outs in the eighth, Daniel Winkler gave up a single to Josh Bell before plunking Victor Robles. Winkler escaped the inning by forcing Turner to ground out.

Happ began the bottom of the eighth by skying a towering drive that landed in the basket atop the wall in left-center. Wander Suero gave up the leadoff dinger, which tacked on the final run of the game. With one away in the ninth, Zimmerman struck out by whiffing at a wild pitch thrown by Craig Kimbrel but was able to hustle and reach base. Kimbrel then struck out Schwarber on a foul-tipped third strike for the second out of the inning, and a game-ending groundout by Castro concluded the Cubs' 6-3 triumph.