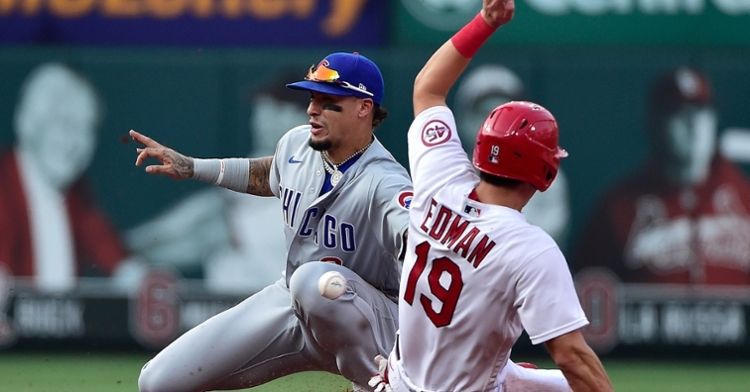 ST. LOUIS — After two straight nights of coming from behind against the St. Louis Cardinals (49-48) in the ninth inning, the Chicago Cubs (47-50) were unable to manufacture any comeback magic in Thursday's series finale at Busch Stadium. A two-run double hit by Jake Marisnick in the fourth frame provided the Cubs with their only runs of the game, and the Cardinals, who took 3-of-4 in the set, never trailed after jumping out to a 1-0 lead in the bottom of the first and ultimately won 3-2 for the second night a row.

Willson Contreras was robbed of a first-inning home run by Harrison Bader on Wendesday, and he opened the game on Thursday by flying out to Bader in deep center. In the Cardinals' first at-bat, Dylan Carlson took Adbert Alzolay deep with a 420-foot blast to right. Paul Goldschmidt drew a walk after that, and Ian Happ then made a nice leaping catch in deep left, resulting in a Nolan Arenado flyout. Alzolay struck the next two batters out, thus ending the inning.

An absolute rocket from the rookie! pic.twitter.com/aM0LFHUg09

Tommy Edman drew a leadoff walk in the bottom of the second but was thrown out by Contreras on a steal attempt, with Baez applying a no-look tag at second. Edmundo Sosa committed a fielding error that enabled Nico Hoerner to reach at the start of the third. Happ struck out thereafter, and Alzolay then bunted into a 5-6-4 double play. With one out in the third, Carlson hit a bloop double that Baez was not quite able to catch in shallow left. Arenado batted with two outs and hammered a 408-foot two-run shot to left-center.

You're not that guy, pal, trust me.

You're not that guy. pic.twitter.com/DZ94tzpa4n

No doubter from Nolan ?? pic.twitter.com/Lm3lx9T4L4

Patrick Wisdom was walked with two outs and nobody on in the fourth, and Baez smacked a single up the middle on the very next pitch, marking the first hit of the night for the Cubs. Kwang Hyun Kim then suffered the only significant mistake of his six-inning start when he gave up Marisnick's aforementioned two-run double. The two-out two-bagger to deep center plated Wisdom and Baez and snapped an 0-for-16 stretch by Marisnick. Kim maintained his composure and struck out Rafael Ortega in the ensuing at-bat.

Carlson stayed piping hot by slugging a double to deep left-center with two outs in the fifth. He then moved to third on a fluky walk called against Alzolay, who proceeded to strike out Goldschmidt. In a 1-2-3 top of the sixth, Anthony Rizzo flied out to the warning track in center. Ryan Helsley pitched the seventh, and Bader helped his cause with a spectacular play. Following a two-out single by Ortega, Hoerner hit a flare to shallow center that Bader was able to catch by way of a remarkable diving snag.

Bader's defensive feat did not equate to offensive success in the home half of the seventh, as he led off with a strikeout. After recording the punchout Dillon Maples, struggled with command issues in the next plate appearance. Maples threw a pitch that sailed all the way to the backstop and unintentionally drilled Sosa in the helmet on the subsequent pitch. Sosa dropped to the ground upon getting beaned by a 95-mph four-seamer but was eventually able to take his base.

Dillon Maples hits Edmundo Sosa in the helmet with a 95 mph pitch, but Sosa stays in the game.@Cubs #GoCubsGo @Cardinals pic.twitter.com/ACJBX72f7v

Maples walked Matt Carpenter thereafter and was then relieved by Daniel Winkler. Sosa tagged up and reached third on a Carlson flyout, and a walk issued to Goldschmidt loaded the bases with two outs. Winkler escaped the jam by forcing Arenado to fly out. Kris Bryant did not start for the second consecutive game due to a right hamstring injury that caused him to get pulled from Tuesday's tilt. However, he pinch hit iin the eighth and drew a leadoff walk off T.J. McFarland. Jason Heyward pinch ran for Bryant, and Robinson Chirinos pinch hit for Winkler. Chirinos grounded into a 6-4-3 double play, and Contreras then struck out.

Trevor Megill, who was just called up earlier in the day, toed the slab in the eighth. Edman hustled for a two-out single to shortstop, which featured a valiant attempt by Baez at throwing Edman out, but Bader flied out after that. Alex Reyes pitched for the first time since experiencing his first career blown save on Tuesday. He got Rizzo to ground out and fanned Wisdom before walking Baez. Marisnick had a chance to collect his second pivotal hit of the game but struck out on three pitches instead. Reyes was fired up after bouncing back and recording a save to lock up the Cardinals' 3-2 victory over the rival Cubs, who tallied only three hits in the loss.