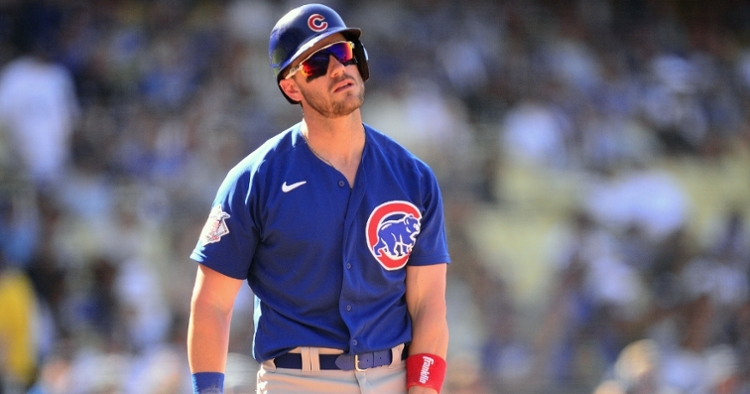 Every MLB season is filled with storylines, which is why the season is so fun to watch. Some of those storylines are good, some are bad, and some are surprising storylines that even the most casual fan didn't see coming. For the Chicago Cubs, there were plenty of storylines as this team went through a ton last season.

From getting off to a hot start to surge into first place to having two 11-game losing streaks later in the season, this team went through a lot, and now the fans are suffering the consequences of a poor season. One of the many surprise storylines in the league last season hailed from the Cubs in veteran journeyman Patrick Wisdom.

The former St. Louis Cardinals was signed to a 600K entry-level contract as he was always seen as a productive player with tons of power. That power was on display from day one, and it kept getting better from there. After hitting six homers in 2012, he spent the next three seasons hitting at least 14 homers a season as the power was starting to come. Along with that came your typical power hitter as his average struggled to reach .240 while striking out nearly 40% of the time.

Following a down year in 2016, Wisdom broke out in 2017, and that is when he put his name on the map. Despite hitting just a .243, Wisdom belted a career-best 31 hrs to go with 89 RBIs. He took 39BB and struck out 143 times, but he was starting to make more consistent contact which is a good thing. Wisdom had a brief call-up in 2018, but then broke out for 31 homers in 2019 as Wisdom was starting to insert himself as an everyday player.

Average aside, Wisdom was starting to show the minor league world what kind of player he was. I get that the home run or bust strategy isn't what teams want, but Wisdom was starting to show he was too good for the Minor Leagues and had nothing left to accomplish. His biggest issue was finding an everyday role with a big-league club, as every stop he made had others in front of him.

That was one of the biggest reasons he signed with the Cubs because it gave him a chance to make the big league club and be a near everyday player if needed. Wisdom saw action at the end of the 2020 season and then re-signed with the Cubs on a minor league deal for 2021. While playing for AAA Iowa, Wisdom only needed eight games to leave a lasting impression hitting eight homers and driving in 11 in those games. His .160 average was a concern, but the Cubs had injuries from day one, and thus Wisdom was called up.

From the moment he arrived in Chicago, he quickly became a fan favorite as he was starting to put that excellent power display on the center stage. Although his .231 average and his 32BB/153 strikeout ratio weren't ideal, Wisdom did many great things, and that all started with being a versatile player. What he lacked in overall contact, he made up for in power as the third basemen belted a team-high 28 homers to go with 61 RBIs. Those numbers came in just 106 games, so you are looking at someone who had an outside shot at 40 homers.

Not only that, but Wisdom led all National League rookies in homers, and that is telling a lot when you look at the players in this league. Given that he did struggle to make consistent contact, you have to wonder what kind of numbers he would have put up ad been on base consistently. Knowing that he has the potential to do what he did this season long-term, you have to like his chances of sticking with the Cubs for at least the next several seasons.

Unlike most rookies, Wisdom is approaching 30 years old and was a minor leaguer most of his career. Now that he has shown what he can do at the big stage, Wisdom is looking to build off that and show more consistency at the plate. That all comes with patience at the plate, which he will be working on a lot this spring whenever it starts.

I know the Cubs have wanted to get away from the home run or bust approach, but they lost so much power from last season's team that keeping Wisdom on the roster is a must for the short-term. Outside of that, his future is up in the air, but you have to like his short-term outlook with this team and the ability to continue producing at a higher level than most felt he could.