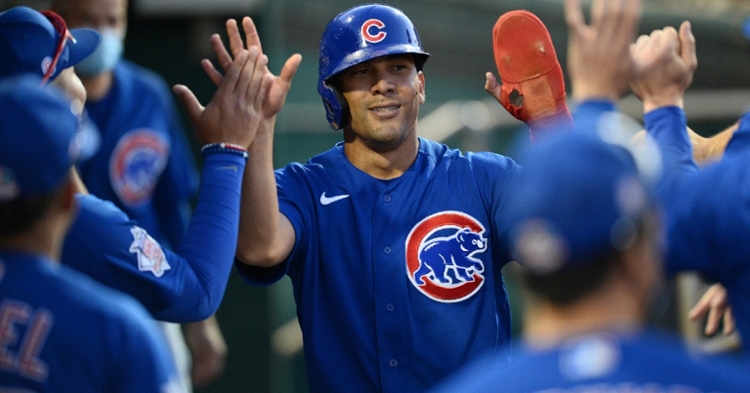 All four of the Cubs affiliates were on the field on Wednesday night as the Minor League season is just getting underway. There was a lot to like across the board despite the teams playing to a 2-2 record. You saw promising pitching performances by some, clutch hits by others, and some of the Cubs top prospects making their season and professional debut.

While wins and losses are ultimately what every team wants, this season is more about developing these players after losing their entire 2020 season. Whoever can produce the most this season has the best shot of reaching the MLB by 2022 or 2023 as they will have proven to be the real deal.

Three is the lucky number for Indianapolis in the early going as they have scored three runs in each of their first two contests. Fortunately for the Cubs, their offense showed up in a big way. After being no-hit for five-plus innings on Tuesday, the Iowa bats erupted for eight runs, with most of those coming via the long ball.

Rafael Ortega continues to impress in the early going by homering not only once but twice as he provided the early thunder with those solo shots. Nick Martini also added a solo shot of his own as all three of the Cubs runs to this point came off the long ball. An eighth-inning homer by the Indians, Dustin Fowler tied things up at 3-3, but that is when the Cubs busted things open with a five-run bottom of the eighth.

That all started with Taylor Gushue as his RBI single not only gave Iowa the 4-3 lead, but it proved to be the game-winning hit in the process. Abiatal Avelino then provided the big blow for the Cubs as his grand slam was the dagger for the Indians, lifting the Cubs to the 8-3 win.

Brad Wieck made his season debut for Iowa walking two and striking out one in his 2/3 of an inning, while free agent pick up Adam Morgan looked sharp in his inning plus.

Ian Miller led off and reached base three times, P.J. Higgins picked up a hit while Aveline and Ortega added two hits of their own. Cameron Maybin continues to struggle, going 0-5, and is now 0-9 to start the season with six strikeouts.

After having their game rained out on Tuesday, Tennessee kicked off their season by dropping a tough one to Montgomery 3-1. The Smokies did get a promising showing from starter Cam Sanders as he made his AA debut. Sanders was nearly perfect in five innings, walking one and striking out seven while not allowing a hit. Luis Lugo, Scott Effross, and Bryan Hudson were equally as impressive as the Smokies not only led 1-0 through eight but hadn't allowed a hit to this point.

The lone run for Tennessee came in the fifth inning when Andy Weber ripped an RBI to center. That put Sanders in line for the win as the Smokies were looking to finish things off. It isn't too often you lose a game when allowing just one hit. Wednesday was one of those instances as Manuel Rodriguez struggled in the ninth.

After struggling with his command all inning, Rodriguez allowed the first and only hit to Montgomery. Unfortunately, that hit was a big one, with Rene Pinto crushing the three-run homer, which proved to be the difference in the Biscuits 3-1 win.

Other top prospects on the field were Miguel Amaya, who went 0-2 with a walk at the plate. Christopher Morel also made his AA debut, picking up one hit in four tries with Weber as the lone player with multiple hits.

The Tennessee Smokies fall to the Montgomery Biscuits 3-1 after a late three run homer by Rene Pinto. The teams take the field again tomorrow inside Smokies Stadium for a 7pm start. Tickets for tomorrow's game can be purchased using the following link, https://t.co/Xj5puRdKJr. pic.twitter.com/SKu20fQUWs

The one team that seems to be picking up where they left off last season is South Bend, who won their second straight game 4-3. A short but good outing for a start Chris Kachmar kept South Bend in the game as it was the offense setting the tone early.

Following a Michael Massey RBI single in the top of the third off Kachmar, South Bend responded with a big inning, pushing all four of their runs across in the third. Cole Roederer was right in the middle of that as his RBI single not only tied things up but was the start of that rally. Bases loaded walks to both Tyler Durna, and Cam Balego extended the lead to 3-1 before a Bryce Wyndham sacrifice fly made things 4-1.

Jeison Guzman made things a bit more interesting in the sixth as his Two-run single off Tanner Jensen-Dalton to close within 4-3. That was as close as the River Bandits would get as both Brandon Hughes and Burl Carraway shut the door the final two innings, with Carraway picking up his first professional save in his first appearance.

Roederer has gotten off to a fast start this season as he looks to improve upon his first professional season. Chase Strumpf went 0-3 with one walk and three punchouts, with Tuesday's hero Delvin Zinn continuing to get on base from the nine spot.

The return of Buddy Bailey to Myrtle Beach hasn't gone as planned thus far as the Pelicans dropped another one to Charleston 8-2. Big innings have been the story for the River Dogs through two games as a five-run fourth took what was a 2-0 game and turned it into 7-0. That makes two games in a row where Charleston had a five-run frame.

With Nick Schnell providing the early offense with a solo shot in the first and an RBI groundout in the third, there wasn't much to talk about regarding the Pelicans until the eighth inning, but at that point, the game was 7-0. Edmond Americaan put an end to the shut-out bid with an RBI groundout to make things 7-1. Shortly after, it was Darius Hill coming through with another RBI hit to make things 7-2. Johan Lopez capped off the scoring with a solo shot in the bottom of the eighth to give Charleston the 8-2 win.

Hill continues to provide the thunder from the top of the lineup as he not only is seen the ball well but leads the team with three RBIs through two games. Jordan Nwogu picked up his first hit of the season last night but struck out in his other three times. Ed Howard followed up his first career RBI the night before with an 0-4 three strikeout performance, too, as those too were flailing a lot at the plate. Yohendrick Pinango and Ethan Hearn were also held hitless in what was a quiet night for Myrtle Beach.

We'll get another chance tomorrow night against the RiverDogs.#MBPelicans pic.twitter.com/nJnJo5Ghsx