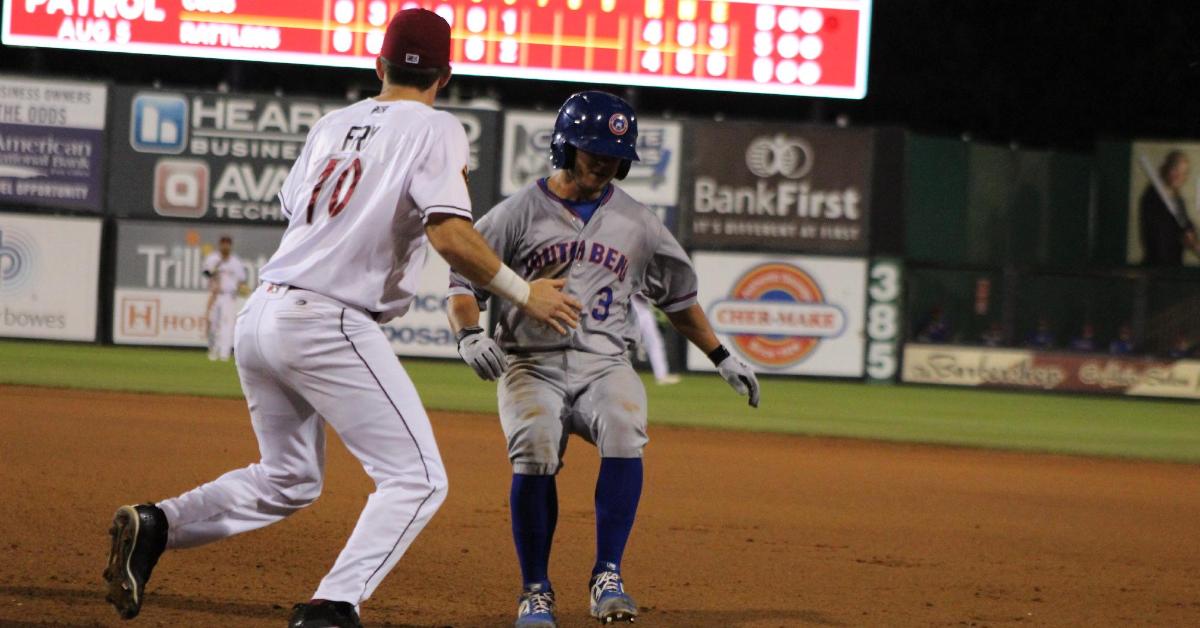 It was an unusually slow night on the farm on Monday as four teams were not in action. With five other games going on, Cubs fans still had plenty to follow as the farm system managed to go 2-3 on what was a difficult night.

IOWA CUBS: Off, traveling to Reno

TENNESSEE SMOKIES 4 – Chattanooga Lookouts 3 (11 innings): For the second night in a row, the Smokies and Lookouts needed more than nine innings of baseball for things to be decided. After both teams scored just one run in regulation, the two teams combined for five runs in the extra frames with the Smokies emerging victorious 4-3 in 11 innings to improve to 46-61.

Tennessee didn’t go with a specific starter in this one, employing five different pitchers throughout the game. Both Michael Rucker and Bailey Clark had the most success as they combined to go 4 2/3 inning of scoreless relief to get the game into extras. The Smokies did, however, strike first in this one wasting no time getting the offense going in the first with an Ian Rice RBI single and 1-0 lead. The Lookouts responded with a run in the bottom of the first on another Jose Siri homer to tie things 1-1 with pitching taking over from there.

With nine innings not enough and the game still tied 1-1 the teams needed another round of extra baseball to see who would come out on top. In the 10th, it was the Smokies getting back on the board as Jared Young singled home the go-ahead run for the 2-1 lead. Once again Chattanooga didn’t let that faze them as they too scored in the 10th with a double play bringing home a run to tie things 2-2 sending the game to the 11th.

It was in the top half of the 11th when the Smokies tried to put things away as the Vimael Machin single up the middle doubled their run total from two to four as they now led 4-2. Looking to close things out on the mound, Ben Hecht entered for the save and was immediately greeted with an Alberti Chavez sac-fly to make things 4-3. Fortunately, that would be all Hecht would allow as the Smokies took home another extra-inning win 4-3.

Machin collected two hits in the game including the game-winner as he is now hitting a 292 for the year. He was the lone Smokie with multiple hits as five others joined him with one hit nights. Nico Hoerner entered the game as a pinch hitter late and finished going 0-2.

.@gknumber28's road to the @Cubs has featured many twists and turns, but now he is having a breakout season in the Pelicans' bullpen!

SOUTH BEND CUBS 17 – Lansing Lugnuts 8: Sometimes you can look back at a game and say that it changed your season one way or another. For South Bend, that game may have been on Monday as they exploded for 17 runs to top Lansing 17-8 and improve to 56-48 on the season. Riley Thompson earned the win to improve to 7-5 on the season as he lasted five innings allowing just 2ER while the offense took care of the rest. His ERA is now 2.83 for 2019.

Up 1-0 in the second, the Cubs busted out the bats for a huge frame to take a commanding lead. Yonathan Perlaza got things started with an RBI single before Clayton Daniel brought a pair home with a triple. Andy Weber continued his red-hot series with another double to push the lead to 5-0 after two. Lansing got one of those runs back in the bottom of the second, but the very next inning saw Marcus Mastrobuoni plate two with a double to push the lead to 7 -1.

The Cubs offense went to work in the fourth as they nearly equaled their game total for runs in that inning alone. A pair of bases-loaded walks to both Cole Roederer and Perlaza pushed the lead to 9-1 keeping the bases jammed in the process. Mastrobuoni followed that up with his second straight double to bring home a pair before Daniel and Weber added RBI singles of their own to push the lead to 13-1.

Despite the game all but over, Lansing began to rally in the fourth as a Jake Brodt solo shot was just the beginning of what was a nice run of innings. From the fourth inning on, the Lugnuts not only managed to score some runs but did so by taking a big dent out of the lead pushing across seven unanswered runs to make things a 13-8 game late. Johnny Aiello, Griffin Conine, Ryan Gold, and Gabriel Moreno were responsible for those RBI’s.

Not wanting to keep the Lugnuts momentum going, the Cubs received a pair of two-run shots in the ninth from Brennan Davis and Roederer to cap off the scoring as South Bend rolled 17-8. It isn’t too often players have five-hit games, but Weber did just that for the second night in a row with Daniel adding five of his own. The two of them also combined for five RBI’s from the top two spots in the lineup.

Fidel Mejia, Luke Reynolds, Perlaza and Mastrobuoni all added multi-hit efforts in the win as the Cubs slugged out 20 total hits to go with their 17 runs. Davis returned to the lineup by going 1-6, but that hit was his sixth homer of the season. Rafael Narea was the lone player not to record a hit in the win.

EUGENE EMERALDS 5 – Spokane Indians 9: The Emeralds finally decided to score some runs, using a four-run third inning as a big part of it Monday to battle the Indians. The only problem is that they managed just one more run outside that inning while allowing nine as they fell to 19-26 following the 9-5 loss.

Already down 2-0 in the third after a second-inning single from Jake Hoover and third inning double by David Garcia, the Emerald's bats finally came to life using a big inning to take control. Fresh up from Rookie ball was Pedro Martinez as he continues to hit with an RBI single to put the Ems on the board. Darius Hill took matters into his own hands after that, legging out a fielder’s choice to tie the game up before a throwing error on the same play made it a 3-2 game. Jake Slaughter capped off that inning with an RBI double to give Eugene the 4-2 lead through three.

The Emeralds lead was short-lived as Spokane was ready to go in the fourth. With the bases loaded, the Indians were able to draw even as Kellen Strahm grounded into a force out to bring a run across. A second came across on the same play with a throwing error extending the inning. That proved to be costly as Blaine Crim put the Indians in front for good with a double to make things 5-4.

Spokane added to their lead in the eighth inning when Alexander Ovalles pushed across the next run with a double setting up a Hoover sacrifice fly for the 8-4 advantage. Jonah McReynolds made things 9-4 in the ninth with a single before the Ems came to bat one last time. Looking for any rally to keep things going, Eugene managed to put two runners on base with singles. However, a Hill groundout was the lone run they would grab falling to Spokane 9-5.

Both Slaughter and Martinez made their presence felt on the evening, collecting two hits each to go with RBI’s. Hill picked up the Emeralds third and final RBI with two of their runs coming on errors. Fernando Kelli may have gone hitless but did manage to reach base twice on a pair of walks.

Spokane takes this one to open up the series. Back at it tomorrow looking for a little payback!

DSL CUBS (1) 2 – DSL Dodgers 8: The Rookie League season continues to be a struggle for DSL 1 as they fall to the Dodger 8-2 dropping their record to 23-26. Despite a reasonable effort from Alberto Sojo on the mound, the Cubs offense was silenced until late as he took the loss to fall to 0-3.

It was a 3-0 Dodgers lead until the fifth inning when they exploded for five runs. With Vladimir Perez getting the scoring started with a single, the Cubs didn’t help themselves as a wild pitch and bases-loaded walk brought home two more runs for a 6-0 lead. Brayan Rodriguez capped off the scoring with another single to make it 8-0 Dodgers.

That score held up until the bottom of the ninth when the Cubs bats finally broke through. Augusto Acevedo put an end to the shutout bid with an RBI single to get the Cubs on the board. Jeinser Brete added to that inning with an RBI double, but that would be all the Cubs could do falling 8-2.

The Cubs did receive multi-hit efforts from both Cristian More and Rafael Morel as they tried to set the table from the top of the order. The Cubs added five hits through the rest of their lineup. Anderson Parra was strong in relief, going two scoreless frames despite putting plenty of traffic on the bases in the process.

DSL CUBS (2) 2 – DSL Mets (2) 6: The theme of scoring two runs trickled down to DSL Cubs 2, as they fell to the DSL Mets 6-2 bringing their record to 30-19. It wasn’t a big inning that did the Cubs in; instead it was four innings of constant pressure that allowed the Mets to pull away.

With the teams deadlocked 0-0 through three, the Cubs put an end to that in the bottom of the fourth when Orlando Zapata put the Cubs in front with a single 1-0. With Wilker Velasquez tying things up 1-1 in the fifth on a single of his own, the Cubs answered in the bottom of the fifth as an errant pickoff throw turned into an error allowing the go-ahead run to score to make it 2-1.

That would be all the Cubs could do offensively as the Mets ended the game by scoring five unanswered runs to pull away for the 6-2 win. Despite the loss, Starlin Mateo had a solid game at the plate leading the way with three hits. Ronny Simon and Ezequiel Alvarez added multi-hit games of their own as those three combined for seven of the teams nine hits. On the mound it was starter Yander Montero who stood out the most, tossing three scoreless innings as he has yet to allow an earned run this season.