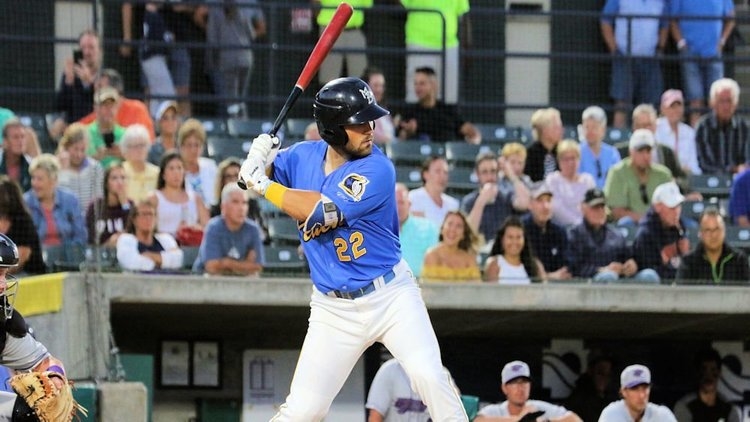 IOWA CUBS 1 – Round Rock Express 8: With Trevor Clifton (1-4) on the mound, the Cubs aimed to make it two in a row versus the Express. Although Clifton pitched well enough to win, allowing 3ER in 5 innings, the lack of offense and inefficient bullpen is what did Iowa in falling 8-1.

It took three innings for someone to finally score as it was the Express striking first in the bottom of the third. Lorenzo Quintana got a good pitch from Clifton to hit and made him pay as he went deep for his first of 2019 to give Round Rock a 2-0 lead. Iowa responded with a run of their own in the top half of the fourth, as Mark Zagunis remained hot with an RBI single cutting things to 2-1. That would be all the Cubs could get offensively, as they struggled to find a key hit.

Down 3-1 in the bottom of the sixth, Duane Underwood Jr. made his first appearance out of the pen in 2019 after struggling mightily as a starter. Hoping the new role could help him rediscover his old self, Underwood yielded a pair of runs on singles from Alex De Goti and Drew Ferguson to see the Express stretch their lead to 5-1. The Express added three more runs in the bottom of the eighth as Quintana went deep for his second time of the game which was followed by consecutive bases-loaded walks to hand the Cubs an 8-1 loss.

With the loss, Iowa falls to 33-23 but remains in first place. The Cubs tallied just three hits in the game with Zagunis, Robel Garcia and Johnny Field collecting those hits. Ian Happ went 0-4 with 1K, while Taylor Davis was 0-2 with 1BB. Tom Collins and Junichi Tazawa were the lone relievers not to give up a run tossing 1 1/3 scoreless innings.

The Express even the series at one game a piece with a victory tonight over the I-Cubs. Tune in for game 3 of the series tomorrow night. First pitch at 7:05! pic.twitter.com/ifDERD7qGA

TENNESSEE SMOKIES 5 – Biloxi Shuckers 8: After picking up their first win in Biloxi since 2017 the other night, the Smokies looked to make it two in the series as they sent Thomas Hatch to the mound. Hatch, seems to have ridden the ship as his rough patch is far behind him. In his 5 1/3 innings on the hill, Hatch did everything in his power to give the Smokies the win, allowing 1R (0ER) on 3H. However, a meltdown by the bullpen in the late innings cost the Smokies a win losing 8-5.

It was all Smokies in the early stages of this one as they put the Shuckers in a huge hole. Starting in the first inning, the Smokies grabbed a 1-0 lead as Jared Young brought home Roberto Caro with a single. Jhonny Pereda added a single a few pitches later pushing the lead to 2-0 in favor of the Smokies.

Tennessee continued to build on their lead in the fourth inning as everything was going right for them early on. Vimael Machin got things started with a single before Young worked a walk to put two runners on with no outs. Six pitches later it was Pereda coming through with his second RBI single of the day and 3-0 Smokies lead. Charcer Burks would bring home the fourth run of the game with a sacrifice fly as Tennessee built a 4-0 lead through three.

The lone run although unearned off of Hatch came in the sixth inning as he had the Shuckers guessing all night. Patrick Leonard reached base on a routine grounder as Machin couldn’t come up with the play at short pushing across the Shuckers first run. That appeared to be the momentum swing Biloxi needed as they began to crush the bullpen in the seventh.

With two runners on base already, Trent Grisham made things interesting ripping a double to make it a 4-3 game. Now with two outs, it was Leonard coming up with yet another clutch hit as his single tied things up 4-4 spoiling an impressive outing from Hatch. The Smokies were able to recapture the lead in the top of the eighth as Pereda ripped a double for his third RBI in the game and 5-4 Smokies lead.

It was in the bottom of the eighth when the wheels began to fall off as Jordan Minch waked the leadoff hitter before leaving the game for Tommy Nance with two outs. Nance went on to walk the first batter he faced before yielding a game-tying single to Luis Aviles Jr. The big blow came two pitches later when Grisham took him deep for his seventh homer of the season giving the Shuckers an 8-5 lead. Biloxi would win by that score as the Smokies were sent down in order in the ninth to fall to 26-27 on the year.

Pereda and Machin led the way with two hits each as Tennessee picked up seven in the game. Caro, Young, and Burks tallied the other three hits for the Smokies.

MYRTLE BEACH PELICANS 3 – Potomac Nationals 6 (5 innings): It was an eventful night for the Pelicans as mother nature caused havoc all game long. Unfortunately for the Pelicans, that limited their chances at a possible comeback as they fell to the Nationals 6-3 in the rain-shortened loss.

Luis Lugo got the ball in this one looking to get back to his winning ways. Lugo deserved better in this outing as he allowed 4R in 4 innings pitched. However, none of those runs were earned as his ERA dropped to 3.25 for the year and (1-3) overall.

The Nationals did most of their damage in the first inning putting the Pelicans in a huge early hole. Nick Banks was hit by a pitch to start things off before a sacrifice bunt turned into an error to put two runners on with no outs. Lugo was on the verge of getting out of the inning when Telmito Augustin ripped a two-run triple for an early 2-0 lead.

The Nationals lead continued to grow as David Masters picked up an RBI single and Alex Dunlap added an RBI double to push the lead to 4-0 heading to the bottom of the first. All four of those runs were unearned as the inning would have been over before that triple had the out been recorded on a sacrifice bunt.

It wasn’t until the fourth inning when Myrtle Beach got on the board as they began to mount a furious comeback. Cam Balego put an end to the shutout bid with his fourth homer of the season to make it a 4-1 game. After an Aramis Ademan walk, it was the long ball once again with Jimmy Herron going deep for his third of the season to make it a 4-3 lead heading into the fifth.

A solo homer puts the Pelicans on the board, now trailing 4-1 in the 4th! pic.twitter.com/S86VkzGHns

The Nationals were able to bring home a pair of runs in the top of the fifth on a couple of RBI singles from Dunlap, and Armond Upshaw as Potomac pushed the lead back to 6-3. That is when Mother Nature bared her ugly head as the sky opened up with heavy rain and storms coming through the area. With poor weather expected for much of the night, it was decided that the game would be called after five innings with the Pelicans falling 6-3 to fall to 19-36 on the season.

SOUTH BEND CUBS 4 – Dayton Dragons 5: South Bend took to the road Friday as they were looking for a positive start to the road trip. With flame-throwing lefty Brailyn Marquez on the hill, the Cubs were fully confident they could secure a road win. However, it was a pair of two-run innings that upended a successful early outing for Marquez (3-1) chasing him in the fifth inning as the Dragons were able to come out on top 5-4.

Early on, it was all South Bend as they raced out to a quick two-run lead. Jonathan Sierra got the scoring started in the first inning as he ripped an RBI double for the 1-0 lead. Rafael Narea added to that lead in the second inning with a perfect safety squeeze bunt as South Bend took a 2-0 lead after two innings of play.

After cruising along through three innings, Marquez began to run into some fourth inning trouble. Brian Rey singled with one out to reach base and would then advance to third on a ground rule double off the bat of Pablo Manzanero. Marquez would then gift wrap the Dragons first run of the game with a wild pitch before Jay Schuler added an RBI double to tie the game up 2-2.

The solid contact for the Dragons continued into the fifth inning as they were able to chase Marquez before the inning came to a close. With two outs in the inning, a Micahel Siani walk ignited a rally as Rey picked up another single to put runners on the corners. The key play in the inning came a few pitches later as Rey was able to steal second putting two men in scoring position. That is when Manzanero put the Dragons in front with a single giving Dayton a 4-2 lead.

The Dragons continued to extend their lead in the eighth inning when Schuler picked up an RBI double to make it a 5-2 game. It wasn’t until the ninth inning when South Bend staged a furious comeback attempt in hopes of forcing extra innings.

Gustavo Polanco led things off with a sharp single to the right. After a force out erased him from the bases, it was Delvin Zinn collecting a single to put two runners on with one out. The hit parade continued with Andy Weber as his single not only made it a 5-3 game but brought the winning run to the plate with runners on the corners.

Tyler Durna brought home the Cubs fourth run of the game with an RBI groundout, but it was also the second out of the inning putting all the pressure on Sierra. After coming clutch with a walk-off hit a couple of nights ago, Sierra couldn’t duplicate that magic as he grounded out for the final out in the 5-4 Cubs loss.

South Bend fell to 29-24 with the loss and is in fourth place in their division. Weber, Polanco, and Durna all had good nights at the dish collecting two hits each in the loss. Jack Patterson pitched great out of the pen, tossing 3 1/3 innings with just 1ER allowed to bring his ERA to 3.47. The Cubs stranded 20 men on base as they had plenty of chances to bring runners home.

Cubs rally late, but can't complete the comeback as Dayton grabs the game one win. pic.twitter.com/ENuU3ZcL5g