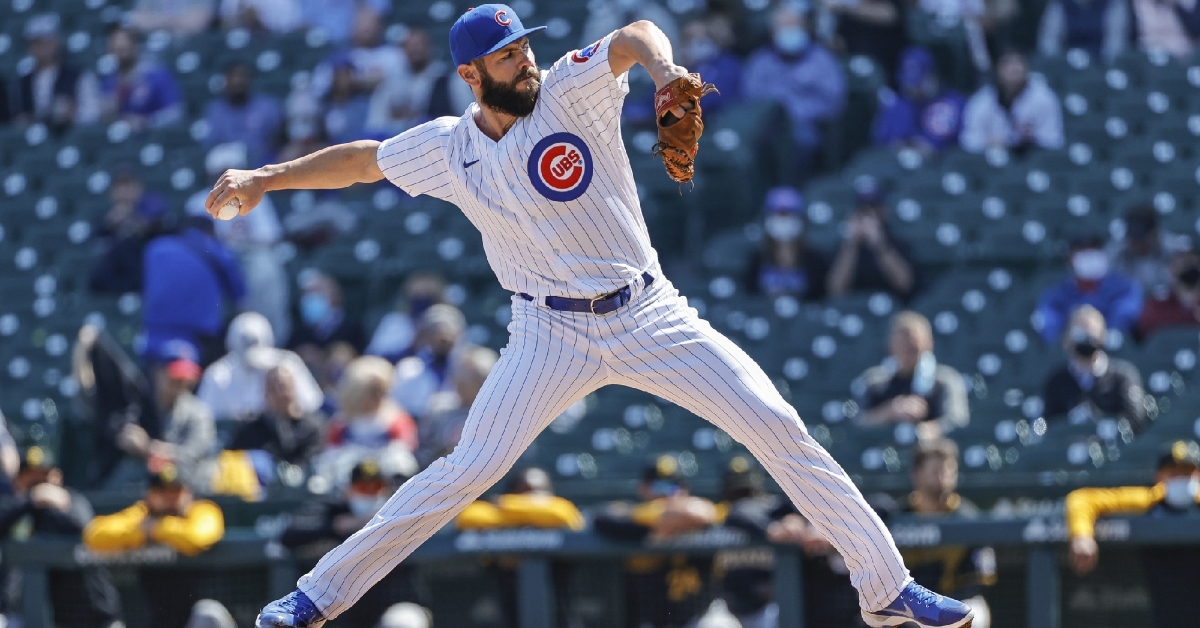 Jake Arrieta, once an ace for the Cubs, showed out in his first start with the North Siders since 2017. (Credit: Kamil Krzaczynski-USA TODAY Sports)

CHICAGO — Bouncing back following a dismal offensive showing on Opening Day, the Chicago Cubs (1-1) powered out a pair of home runs at Wrigley Field and defeated the Pittsburgh Pirates 5-1 on Saturday. Kris Bryant and Jason Heyward slugged a solo homer apiece on the afternoon, and Jake Arrieta returned to the mound for the Cubs and pitched six innings of one-run ball.

Although they outhit the Bucs 7-6, the Cubs left seven on base and were only 2-for-9 with runners in scoring position. However, the aforementioned solo jacks and Baez's superb baserunning made the difference. Pittsburgh finished 1-for-3 with runners in scoring position and left five on base. The Cubs drew four walks, while the Pirates drew only one. Both teams struck out 12 times and recorded a double play, but, for the second straight game, the Pirates suffered two errors.

Arrieta, who pitched for the Cubs from 2013-17 and rejoined the North Siders in the offseason, gave up a run in the opening inning but was relatively flawless the rest of the way. The righty struck out five in his winning start, which made him 1-0 on the season. Tyler Anderson started on the bump for the Buccos and, despite fanning seven, gave up three runs on five hits in five innings of work. He dropped to 0-1. Craig Kimbrel made his season debut and finished off the Pirates in the ninth.

Javier Baez led the charge for the Cubs by going 2-for-4 and playing solid defense. "Javy" scored a run and batted in another and helped jump-start the Cubs by stealing two bases in the second inning. Jason Heyward went 2-for-4 at the dish. For the Pirates, not a single player came up with multiple hits. More concerning was promising young Pirate Ke'Bryan Hayes leaving the game with a wrist injury and not returning.

Kevin Newman plated Hayes, who drew a first-inning walk, to put the Pirates up 1-0. The Cubs were doubled off when Anthony Rizzo lined into an inning-ending double play in the bottom of the first. Baez stole second and third after singling in the second. He then read a bloop hit off the bat of Jake Marisnick to perfection, cruising home to put the Cubs on the board. Later in the inning, following a base knock by Heyward, David Bote scored Marisnick via a sacrifice fly.

Javy is on the move. ???? pic.twitter.com/oFaoTEnZWg

The Cubs returned the favor by doubling off the Pirates to end the top of the third. Bryant fired to Rizzo for a 5-3 double play after catching a liner. "KB" proceeded to increase Chicago's advantage with the Cubs' first homer of the season in the bottom of the third. The high drive to center carried 404 feet. A botched double play attempt by the Pirates that allowed Heyward to reach base provided the Cubs with an auspicious opportunity to score in the fourth. However, the error did not lead to any runs scoring.

Willson Contreras was gunned down at the plate when attempting to score on a grounder in the fifth. Pirates catcher Jacob Stallings was not pleased with Contreras' slide, leading to the two backstops exchanging words but appearing to bury the hatchet later in the game. Heyward made the score 4-1 with a 423-foot blast to right off Clay Holmes in the sixth inning. Walks of Bryant and Rizzo culminated in Baez smacking an RBI base knock that scored Bryant in the seventh, resulting in the eventual final tally off 5-1.

Sometimes you know, you know? pic.twitter.com/ZmrzmtHFEO

The rubber match of the three-game set at Wrigley Field will take place at 1:20 p.m. CDT on Sunday, April 4. Zach Davies (0-0, 0.00) will make his Cubs debut by starting on the mound and squaring off against the Pirates' Mitch Keller (0-0, 0.00) in a battle of right-handers. Expect warm, mostly sunny conditions with light winds at the Friendly Confines.