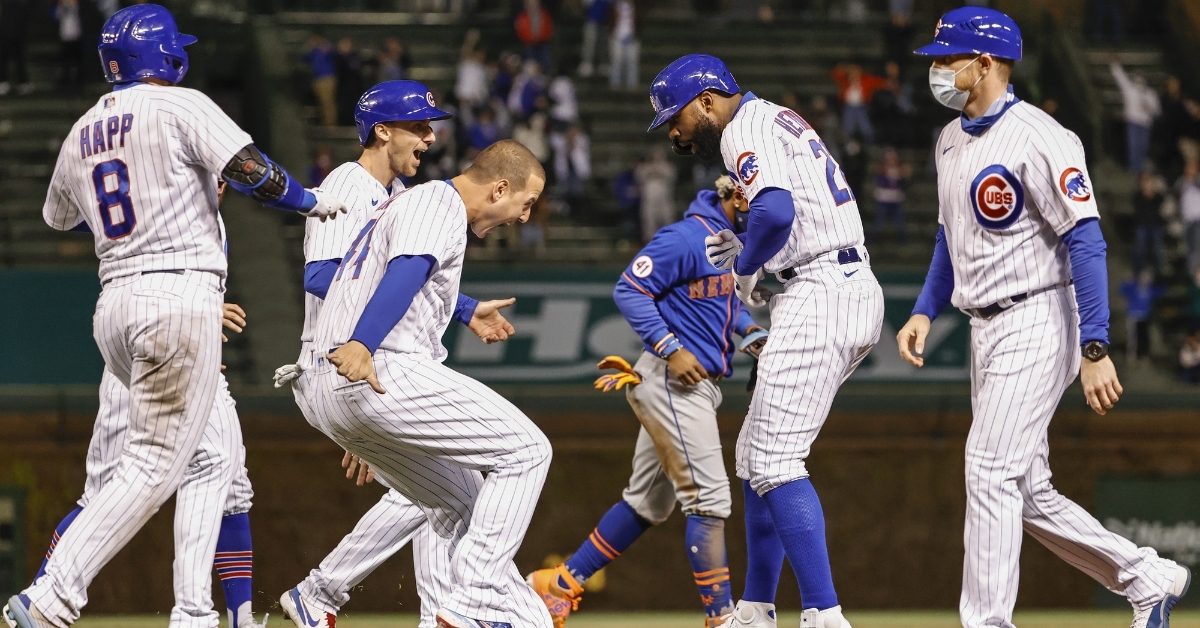 CHICAGO — After not playing since Tuesday night, Jason Heyward dug in the plate as a pinch hitter in the bottom of the 10th on Thursday and clearly was not rusty, as the veteran slugger wasted little time in hitting a walkoff single at Wrigley Field to wrap up the first series sweep of the year for the Chicago Cubs (9-9). Heyward plated Javy Baez with a base knock to right field, and the Cubs beat the New York Mets (7-7) 4-3 in 10 innings for their victory of both the extra-inning and walkoff varieties on the season.

A three-run second inning provided the Cubs with all of the runs they scored prior to Heyward's heroics in the 10th. Joey Lucchesi and Trevor Williams battled on the mound in the early goings, but a 10-pitch walk drawn by Jake Marisnick with one out in the third shifted the trajectory of Lucchesi's start. After initially planning for a sacrifice bunt, Williams drew a walk in the ensuing plate appearance. A lineout enabled both runners to advance, and Willson Contreras hit a comebacker that ricocheted off Luccchesi and resulted in an RBI single.

Marisnick scored on Contreras' infield hit, and Kris Bryant followed that by slugging a two-run double off the wall in left-center. Williams and Contreras crossed the plate as a result of Bryant's two-bagger, with Contreras potentially catching a break when the throw home was off the mark. Pete Alsonso responded with a two-run homer in the ensuing inning that came after Dominic Smith walloped a leadoff double off the left field wall. Alonso, who also hit a two-run jack against the Cubs on Wednesday, sent the dinger flying 413 feet out to left.

Williams barely avoided coughing up the lead in the at-bat that followed Alonso's home run, as Michael Conforto cranked a double that bounced off the very top of the basket above the wall in center field. Conforto missed out on a home run by mere inches and was then left stranded at second base, with the Mets suffering three straight outs thereafter. Yet another double off the wall tied the game in the seventh, when J.D. Davis plated Jonathan Villar with a rope to deep center off Ryan Tepera.

In the seventh, Baez goofed by loafing out of the batter's box when he assumed what turned out to be a bloop hit was nothing more than a popup. He avoided another blunder thanks to a Cubs challenge that overturned an out call that was initially given when Baez was tagged after hesitating to return to first base after rounding the bag. The Cubs went on to squander a golden opportunity to retake the lead in the bottom of the eighth, with a leadoff triple hit into the right field corner by Marisnick getting wasted.

Bryant led off the bottom of the ninth with a single off Edwin Diaz. However, the inning ended with Bryant getting caught stealing. Despite beating the throw to second, Bryant briefly popped off the bag and was tagged out. The Cubs challenged, but the out call stood. Craig Kimmbrel pitched a three up, three down ninth, but the Cubs opted to send Daniel Winkler to the mound in the 10th. After a wild pitch made for an inauspicious start to his outing, Winkler struck out the first batter and loaded the bases via two walks.

Winkler escaped the jam by forcing Smith to ground into a 4-6-3 double play, but Diaz was unable to escape the predicament he found himself in during the bottom half of the inning. Diaz hit Duffy with a pitch to lead things off, and Alonso nearly botched a play on a sacrifice bunt by Bote, as he slipped and fell while feigning a throw to third before making a dicey throw to first that resulted in the first out. Eric Sogard was walked to load the bases and set up a potential double play, and Heyward ended the game with a base hit to right that brought Baez, who began the half-inning at second, home and provided the Cubs with a 4-3 victory and a three-game sweep over the Mets.