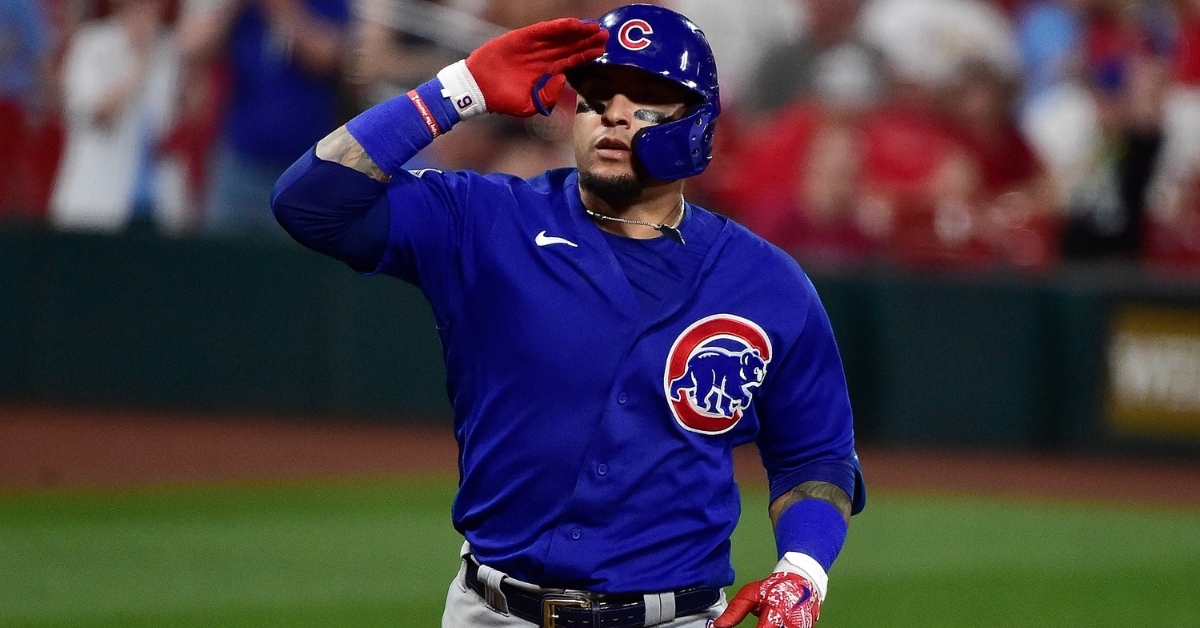 ST. LOUIS – In a game lacking for offense but teeming with questionable umpiring and shoddy hitting by the St. Louis Cardinals (24-22) with men on base, the Chicago Cubs (26-20) beat their archenemies thanks to a go-ahead home run by Javy Baez that broke a scoreless tie in the 10th inning. Neither team plated a run through nine innings, with the North Siders having no success at the plate against Adam Wainwright and the Redbirds squandering several golden opportunities on offense. In the end, the Cubs won 2-1 and took 2-of-3 at Busch Stadium in the first series of the season between the National League Central foes.

Wainwright struck out seven and was taken for just one hit and one walk in his eight inning of work. The Cubs failed to advance a runner into scoring position the entire time the veteran ace was on the mound. Meanwhile, Davies gave up four hits and walked three in his five-inning start, but the Cardinals were unable to score off him. Excluding Baez's aforementioned dinger, the only two hits recorded by the Cubs in the game were singles by Kris Bryant, which were hit in the first and ninth frames. The Cardinals collected six hits but finished 0-for-10 with runners in scoring position and left 12 baserunners stranded.

Tommy Edman doubled in the Cardinals' first plate appearance of the evening. The two-bagger, which hit off the wall in the right field corner, went to waste, as did a two-out double by Nolan Arenado in the third. Paul Goldschmidt was on first at the time of Arenado's double, and he reached third, only for Yadier Molina to fly out to deep center in the next at-bat. Wainwright started off the bottom of the third by sending a drive to deep left, but it was caught on the warning track by a leaping Joc Pederson. In the top of the fourth, David Ross was ejected for voicing his displeasure with Erich Bacchus' favorable strike zone with Wainwright on the mound. Bacchus called outside pitches strikes – for both teams – throughout the night.

After hitting a leadoff double down the right field line in the home half of the fourth, Harrison Bader committed a baserunning gaffe and was doubled off at second base because of it. Heading for third when Justin Williams hit a blooper to shallow right-center, Bader assumed that Nico Hoerner was not able to make a play on the ball. However, Hoerner jumped and pulled off a backhanded snag before firing to Baez at second base to complete the double play, as Bader's slide back to the bag was late. Edmundo Sosa proceeded to hit a double of his own, but nothing came of it. Nick Martini nearly beat out a throw to first when he grounded out to begin the sixth. Andy Green, who replaced Ross as the Cubs' acting manager, incorrectly challenged the call, which came back to bite the Cubs, who lost their challenge.

Tommy Nance relieved Davies and tossed a 1-2-3 sixth. He allowed the first two batters of the seventh to reach base, though, and was then replaced on the bump by Ryan Tepera. A blown call shortly followed Tepera entering to pitch, as third base umpire Phil Cuzzi ruled that David Bote was pulled off the bag by a throw from Tepera, who fielded a bunt by Adam Wainwright and threw to third. Bote clearly remained on the bag, though, and also appeared to tag Sosa for good measure before Sosa reached the base. Tepera was charged with a throwing error, however, and the Cubs were unable to challenge the play because their earlier challenge was unsuccessful.

.@Cubs get hosed in the 7th because they lost a challenge earlier in the ballgame. BUT, Ryan Tepera gets out of a bases loaded, no-outs jam and they move to the 8th inning scoreless.#GoCubsGo pic.twitter.com/Kx8w8MpJN6

Tepera did not let the umpiring mistake rattle him, though, as he outed the next three batters by tallying a force out at the plate on a fielder's choice, a foulout and a strikeout, respectively. Failing to score with the bases loaded and no outs proved to be the Cardinals' most glaring offensive letdown of the contest. Daniel Winkler gave up a two-out single to Williams in the eighth, and Andrew Chafin issued a one-out walk to Matt Carpenter in the ninth. Neither baserunner reached scoring position, and Craig Kimbrel actually finished off the ninth after entering with two outs. Willson Contreras began the 10th at second, and a groundout moved him to third. Alex Reyes waas then taken deep by Baez, who crushed a 417-foot no-doubter out to straightaway center field.

Reyes walked Ian Happ and Bote in the next two plate appearances but left them stranded by striking out the next two batters. Goldschmidt started the bottom of the 10th at second and took third when a wild pitch from Kimbrel ricocheted off Contreras' wrist. Contreras was in pain after getting plunked but stayed behind the plate. Arenado scored Goldschmidt with a sacrifice fly to center, and Yadier Molina walked after that. Andrew Knizner pinch ran for Molina but never made it beyond first base, as Kimbrel notched two straight strikeouts to close out the Cubs' 2-1 victory in the rubber match.