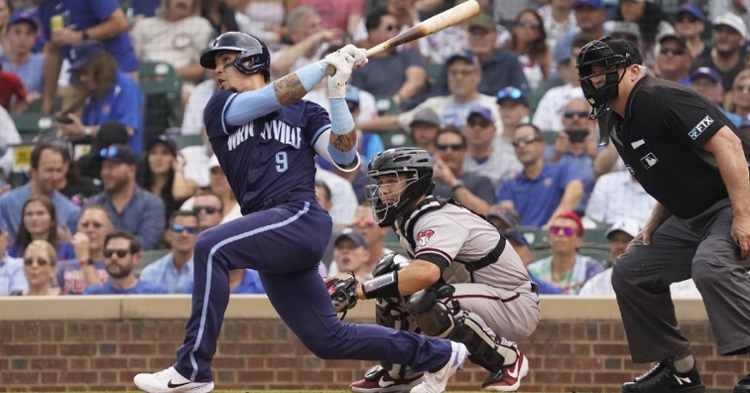 CHICAGO — Willson Contreras received a day off on Friday, and his replacement behind the dish filled his shoes quite nicely. With his first multi-homer performance as a member of the Chicago Cubs (48-50), the recently signed Robinson Chirinos hit a pair of leadoff dingers on a rainy afternoon at Wrigley Field and helped the Cubs earn an 8-3 win over the Arizona Diamondbacks (30-69). Javy Baez set the tone with a go-ahead three-run blast in the first inning, and the Cubs led the rest of the way.

The Cubs took 2-of-3 from the Diamondbacks on the road last weekend and opened a three-game series at home with a comfortable win, as they never trailed on a drizzly day at the Friendly Confines. Davies did not fare well in his start against the D-backs on Sunday, but he redeemed himself on Friday by amassing a season-high eight strikeouts and earning the winning decision after tossing 5 1/3 innings of two-run ball. Conversely, Zac Gallen pitched fairly well in his start versus the North Siders on Saturday was racked on Friday, getting tagged for seven runs in four innings of work.

A convoluted at-bat opened the Cubs' first home game since the All-Star break, as Josh VanMeter was initially called out on a dropped foul tip one pitch after assuming that he had drawn a walk. The umpires convened to discuss the foul tip and ruled that VanMeter's plate appearance would continue, and Davies ultimately forced VanMeter to pop out. Gallen walked Kris Bryant and beaned Anthony Rizzo on the shin with one out in the first. Baez then skied a 424-foot three-run bomb out to left-center.

If you wanna throw a strike to me
I got this bat, you see,
And I can take you for a ride ???? pic.twitter.com/SLwfuelktx

Pavin Smith and Nick Ahmed singled with two away in the second but were left stranded. Chirinos hit a base knock in the second and moved to second on a sacrifice bunt by Davies before Rafael Ortega hit an inning-ending lineout. A leadoff single by Gallen and a two-out walk of Eduardo Escobar surrounded a pair of strikeouts in the third. Matt Duffy returned from an injury layoff of just over two months and started at third base. He mishandled a chopper hit by Christian Walker with two outs in the third but was not charged with an error. Davies then struck out David Peralta to leave the bases loaded.

Bryant drew another walk to start off the home half of the third, and Rizzo moved him to third by smacking a single up the middle. Baez missed out on his second three-run homer of the day, as he grounded into a fielder's choice that saw Bryant get thrown out at the plate. Escobar fielded the ground ball and threw to Daulton Varsho, who tagged out Bryant. Duffy, who last played on May 22, garnered a walk that loaded the bases with one out, and Rizzo then scored on a wild pitch. Rizzo slipped on the wet plate as he hurried home and took a spill. Thankfully, he was uninjured.

After Jason Heyward struck out, Nico Hoerner hit a two-run single to right but was thrown out at second attempting to stretch a single into a double. He plated Baez and Duffy, though, giving the Cubs a commanding 6-0 advantage. Kole Calhoun fired a laser to Ahmed at second, resulting in Hoerner getting tagged out to end the inning. Chirinos led off the fourth with a 408-foot round-tripper to left-center. Baez hit a leadoff double to shallow left in the fifth but did not score.

Peralta began the sixth with a base hit and headed to third on an ensuing double by Smith. Ahmed flew out after that, and Davies was subsequently removed from the game, which saw him receive a rousing ovation from the fans as he headed off the field. Adam Morgan entered to pitch and gave up a two-run double to Varsho, who was nearly tagged out at second. Morgan settled down and struck the next two batters out swinging. Chirinos proceeded to belt his second leadoff jack of the tilt by taking Matt Peacock deep with a drive to left-center in the sixth. He finished 3-for-4 at the plate, with an eighth-inning popout serving as his only unsuccessful attempt at getting on base.

And Daulton Varsho gets the @Dbacks on the board in the 6th! pic.twitter.com/f7mYMGHjXY

Keegan Thompson needed just nine pitches to retire the side in order in the seventh. Rizzo drew a leadoff walk following the stretch, but Peacock got Baez to ground into a 4-6-3 double play thereafter. Ahmed is a defensive maven at shortstop, so he was probably impressed by the great play made by Duffy to prevent him from reaching base with two outs in the eighth. Duffy charged a ball put into play by Ahmed and hurled an impressive throw across the diamond to Rizzo for putout at first. Peacock pitched a 1-2-3 eighth, and Varsho led off the ninth with a 408-foot home run to center. However, Thompson notched a three-inning save by finishing off the Cubs' 8-3 victory.

Varsho has had a really nice day! pic.twitter.com/P9Uj5Y5Qp4